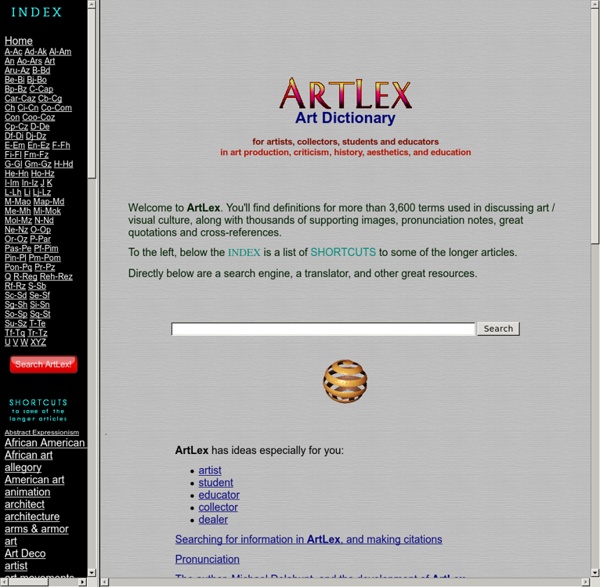 Unusual Words Unusual Words A by no means exhaustive list of rare, obscure, strange and sometimes funny words and their meanings that only seem to crop up in crosswords and dictionaries. Words that are used so seldom, you wonder who invented them and why. Home ~ The Stories ~ Diversions ~ Links ~ Contact Mythology in Classical Greek and Roman Art The Theoi Project galleries now contain more than 1,200 images of ancient Greek and Roman art . The image directory can be searched using the engine below. GALLERY K1 GREEK VASE PAINTING (63 x IMAGES) The Olympian gods in Greek vase painting (Zeus, Poseidon, Hera, Demeter, Apollon & Artemis) GALLERY K2 GREEK VASE PAINTING (60 x IMAGES)

30 Free Seamless Background Textures I get a lot of requests to release more seamless textures here on L&T, so this set is for you guys. It includes a giant selection of thirty repeatable textures ranging from paper to fabric to subtle grunge and noise. Each one of them is fully tile-able and will work perfect for website background or pattern overlays in photoshop. The zip file includes each texture in both 1200px and 500px sizes as well as a Photoshop .PAT file for easy integration. Enjoy!

ch: Temporarily unavailable This Is CivilizationMatthew Collings Episode Two This episode looks at how art came to express our human emotions and the full range of what it is to be human. Mathew Collings examines the work of two great 18th century artists - David and Goya - in a journey that takes him from the glories of Renaissance Italy to the turbulent, violent Paris of the French Revolution. David's art is all about the nobility of man, our higher aspirations. Goya explores our baser side, our darker fears, our murderous drives.

Constructivism (art) Constructivism was an artistic and architectural philosophy that originated in Russia beginning in 1919, a rejection of the idea of autonomous art. The movement was in favour of art as a practice for social purposes. Constructivism had a great effect on modern art movements of the 20th century, influencing major trends such as the Bauhaus and De Stijl movements. Its influence was pervasive, with major impacts upon architecture, graphic and industrial design, theatre, film, dance, fashion and to some extent music.

Summary of the American Academy of Arts and Letters records, 1864-1942 American Academy of Arts and Letters, est. 1904 Society New York, N.Y. Collection size: 800 items (on 5 microfilm reels). Collection Summary: A collection of artists' papers containing correspondence, notes, biographical material, exhibition catalogs, and other published material. Includes: volume of notes, drawings, and calculations made by George Bellows for a study of Jay Hambidge's theory of Dynamic Symmetry; correspondence and published and unpublished biographical and critical material on George de Forest Brush, Childe Hassam, Francis D. Millet, Joseph Pennell, Elihu Vedder, and J. Q. Web Design Schools Guide You don’t have to go to a cosmetics counter or salon to get a professional-grade makeup lesson. Simply get on YouTube, and you’ll find thousands of comprehensive and easy-to-follow makeup lessons taught by professionals and non-professionals alike. These makeup experts can help you create any type of look, while demonstrating proper application techniques and sharing their favorite products.

The Death of Postmodernism And Beyond Articles Alan Kirby says postmodernism is dead and buried. In its place comes a new paradigm of authority and knowledge formed under the pressure of new technologies and contemporary social forces. I have in front of me a module description downloaded from a British university English department’s website. It includes details of assignments and a week-by-week reading list for the optional module ‘Postmodern Fictions’, and if the university is to remain nameless here it’s not because the module is in any way shameful but that it handily represents modules or module parts which will be taught in virtually every English department in the land this coming academic year.

crystal and spore The Crystal and Spore collective reflects the relationship between synthetic and organic systems - that vital intersection between nature and culture where the future of the human landscape is continually being forged. Crystalline forms represent technology, manifest in the ubiquitous silicon chip that provides the digital means to create and receive information. The spore symbolizes the chaotically complex distribution systems of the natural world, through which living genetic information is dispersed. Developed as a workshop in 2000, Crystal and Spore has been creating a flexible media vocabulary and mobile toolkit for delivering artistic, entertaining and educational messages. As an independent Canadian collective of emerging artists, Crystal and Spore pursues new creative activity by merging media with established art forms into a rich plurality of artistic and academic disciplines – aiming to transform multimedia into metamedia.

100 Exquisite Adjectives By Mark Nichol Adjectives — descriptive words that modify nouns — often come under fire for their cluttering quality, but often it’s quality, not quantity, that is the issue. Plenty of tired adjectives are available to spoil a good sentence, but when you find just the right word for the job, enrichment ensues. [Text] Vonnegut's Letter to Students: 'Practice Any Art...Make Your Soul Grow' “You will find that you have already been gloriously rewarded for your poem. You have experienced becoming, learned a lot more about what’s inside you, and you have made your soul grow…” When English teacher Ms. Lockwood assigned her students at Xavier High School to correspond with a well-known author on their work and request advice, Kurt Vonnegut was the only writer to respond. Vonnegut wrote the following response in 2006 to Xavier students about a year before he passed away on April 11, 2007: