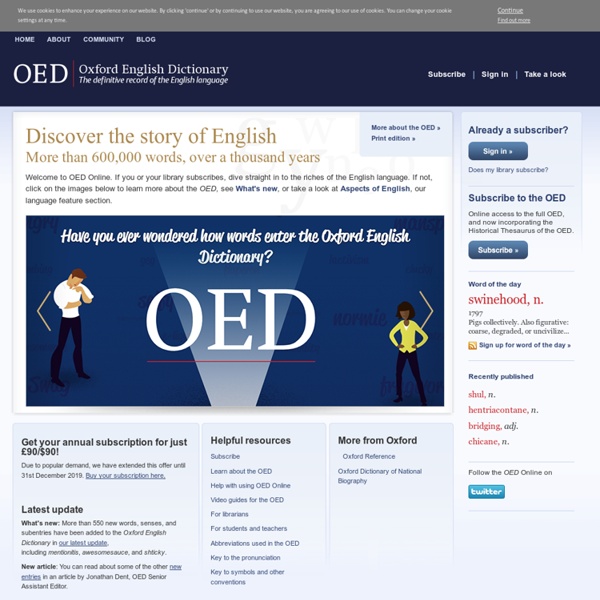 Names for the Wind Abroholos: a squall frequent from May through August between Cabo de Sao Tome and Cabo Frio on the coast of Brazil. Aejej in Morocco: a whirlwind in the desert. Aeolus: regent of the winds in Greek mythology. Air: Earth's atmosphere is a layer of gases surrounding the planet Earth and retained by the Earth's gravity. It contains roughly 78% nitrogen, 21% oxygen, 0.97% argon, 0.04% carbon dioxide, and trace amounts of other gases, in addition to water vapor. This mixture of gases is commonly known as air.

World Wide Words Fossil word A fossil word is a word that is generally obsolete but remains in currency because it is contained within an idiom still in use.[1][2] Fossil status can also occur for word senses and for phrases. An example for a word sense is navy in merchant navy, which means 'commercial fleet' (although that sense of navy is obsolete elsewhere). An example for a phrase is in point ('relevant'), which is retained in the larger phrases case in point (also case on point in the legal context) and in point of fact but is not otherwise used outside of a legal context. English language examples[edit] See also[edit] References[edit]

Gen Y’s New Words for 2009 | Work Exposed the Blog NEW SLANG From povo and myselfish to retox and kward, the terms to know for 2009 While we understand the fleeting nature of slang and promise we are not “trying to make ‘fetch’ happen,” each year ushers in a bevy of new words you might hear and may even want to use (though we urge you to do so sparingly). 2009 introduces us to a vocabulary inspired by pop culture and technology, and here are a few of the favorites heard from the streets, our bloggers, and Gen Ys who know… RECESSION-INSPIRED SLANG Povo (po-vo) “Caroline, I can’t go out to dinner tonight: My pay cut has left me totally povo.” Ex-hole n. Cupcake v. Hot Room n. DIGITAL SLANG Pwn (pone) v. Epic Fail n. Geequals n. Myselfish adj. THIS YEAR’S REHAB Retox (ree-tox) v. Smashed Potatoes adj. STREET SLANG Hate-cation n. Obama/Not Obama adj. Alt-worthy adj. ‘Kward (kwerd) adj. Like this: Like Loading...

Wanderwort A Wanderwort (plural Wanderwörter, German for "wandering word" ) is a word that was spread among numerous languages and cultures, usually in connection with trade, so that it has become very difficult to establish its original etymology, or even its original language. The separation of wanderwörter from loanwords is not unambiguously possible, and they may be considered a special class of loanwords. Examples[edit] Tea, with its maritime variant tea and Eurasian continental variant chai (both variants have entered English), is an example[contradiction] whose spread occurred very late in history: tea is from Hokkien, specifically Amoy, from the Fujianese port of Xiamen, hence maritime, while cha (whence chai)[citation needed] is used in Cantonese and Mandarin. References[edit] Jump up ^ The Pennsylvanian Sumerian Dictionary

Appendix:Swadesh lists Swadesh lists were originally devised by the linguist Morris Swadesh. In the 1940s to 1950s, Swadesh developed word lists of body parts, verbs, natural phenomena, in order to compute the relationships of languages, and in particular their age, by a method called glottochronology. However, for most linguists this method is even more unreliable than lexicostatistics. A Swadesh list may also be useful to achieve knowledge of some universal terms in other languages. To sort the table columns here (or for any other table in any HTML page), copy the javascript link from here (control-click the "sort table" link to copy the link) and once you have come back to this page, paste the javascript code you have copied into your URL window and run it. Assorted Swadesh lists[edit] See also: Category:Swadesh lists Indo-European languages[edit] Proto-Indo-European Other Eurasian languages[edit] Pacific Rim languages[edit] North Asian Southeast Asian and Oceanic Amerindian languages[edit] North American

New word mash-ups added to the 'sexicon' After reading about Is Anyone Up? — the website that gives indie bands exposure in the literal sense — I rushed to my computer to check it out. Would you believe me if I told you I was less interested in naked bodies than in the language? In addition to naked self-promotion by bands, the site includes "revenge porn," revealing photos of just plain folks, generally submitted by ex-lovers. As it happens, I have been blogging about the bottomless (in the sense of "inexhaustible," not "stripped from the waist down") font of new words refreshing the language through the process of blending. Back in 1871 Lewis Carroll coined the term "portmanteau words" for blends. Lewis Carroll may have called attention to portmanteau words or blends, but they predate him by centuries. One source the dictionary cites is a 1425 travel book called "Mandeville's Travels": "If [th]e water be clere [...th]e bawme es gude, and, if it be thikk and drubly, it es sophisticate." "Bawme" is now spelled b-a-l-m.

Lexipedia - Where words have meaning