The kitchen: English Language. Words for the Kitchen. My Polish Kitchen - Modern Polish Recipes Inspired by my Polish Heritage. Polish Recipes na Pintereście. Poland and Polish Recipes on Pinterest. Recipes - Polish Plate. Polish Salads, Soups, Pierogi, Desserts. Below you will find the best Polish Recipes from families in all regions of Poland. 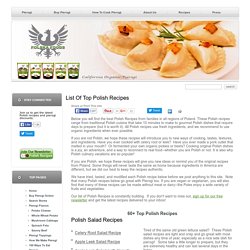 These Polish recipes range from traditional Polish cuisine that take 10 minutes to make to gourmet Polish dishes that require days to prepare (but it is worth it). All Polish recipes use fresh ingredients, and we recommend to use organic ingredients when ever possible. If you are not Polish, we hope these recipes will introduce you to new ways of cooking, tastes, textures, and ingredients. Have you ever cooked with celery root or leek? Have you ever made a pork cutlet that melted in your mouth?

If you are Polish, we hope these recipes will give you new ideas or remind you of the original recipes from Poland. We have tried, tasted, and modified each Polish recipe below before we post anything to this site. Our list of Polish Recipes is constantly building. Polish Salad Recipes Tired of the same old green lettuce salad? Pierogi Recipes Pierogi Recipes: Poland's greatest culinary delight! Polish Food: traditional food and recipes from Poland. Chlopski is the Polish word for peasant, and literally translated this dish is called 'Peasants' Meal'. 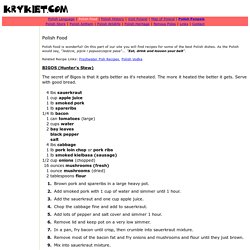 It's a dish which is most popular in the provinces like Lubuskie, in the far west of Poland. Cook bacon in a large skillet until crisp; remove bacon, reserving drippings in skillet. Crumble bacon, and set aside. Add all other ingredients except sausage to dripping; cover and cook 10 minutes over medium heat, turning cabbage once. Add sausage; cover and cook 5 minutes or until sausage is heated. Polish Cuisine – Traditional Menu in Poland – Polish Food. If you want to try traditional Polish cuisine, stop counting your calories. 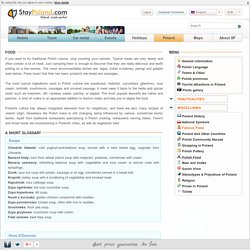 Typical meals are very hearty and often contain a lot of meat. Just sampling them is enough to discover that they are really delicious and worth putting on a few ounces. The most recommendable dishes are: bigos, kotlet schabowy, pierogi and gołąbki (see below). Poles boast that their two basic products are bread and sausages. Polish receipes. Food in Poland - Polish Food, Polish Cuisine - traditional, popular, dishes, recipe, diet, history, meals, staple, rice. Recipes Poland is in Eastern Europe. 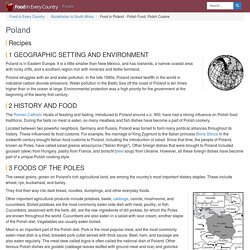 It is a little smaller than New Mexico, and has lowlands, a narrow coastal area with rocky cliffs, and a southern region rich with minerals and fertile farmland. Poland struggles with air and water pollution. In the late 1990s, Poland ranked twelfth in the world in industrial carbon dioxide emissions. Water pollution in the Baltic Sea off the coast of Poland is ten times higher than in the ocean at large. The Roman Catholic rituals of feasting and fasting, introduced to Poland around A.D. 900, have had a strong influence on Polish food traditions. Located between two powerful neighbors, Germany and Russia, Poland was forced to form many political alliances throughout its history. The cereal grains, grown on Poland's rich agricultural land, are among the country's most important dietary staples. They find their way into dark bread, noodles, dumplings, and other everyday foods. 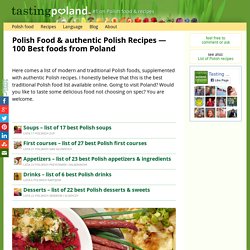 I honestly believe that this is the best traditional Polish food list available online. Going to visit Poland? Would you like to taste some delicious food not choosing on spec? You are welcome. More articles about Polish food: A few introductory words about traditional Polish food Poland is a European country with a trying history spanning over more than 1000 years. Polish cuisine. Complementary traditional Polish farmers food in Sanok, Poland Various kinds of Polish kielbasa From the top down: Biała kiełbasa (white sausage), Kabanos (or Kabanosy in the plural); Wiejska kiełbasa (country sausage) with mustard. 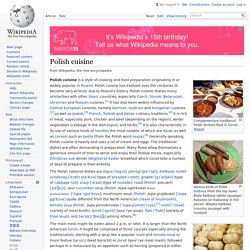 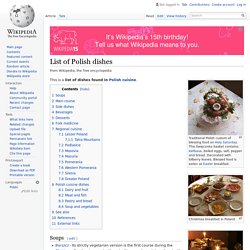 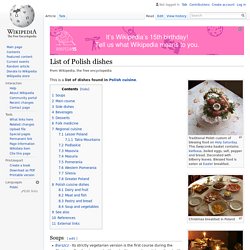