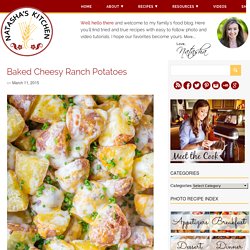 These baked ranch potatoes have just 4 ingredients and they’re perfect for dinner; whether it’s for the fam or a party! My Mama-in-law thought up this recipe and baked it for us on our last visit to California. It seems like every time we visit, I come home with new recipes. I love it! Cheesy Hashbrown Casserole. Oh man, you guys. 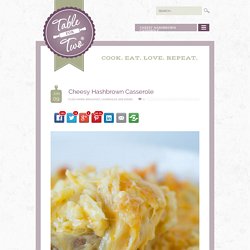 I’m completely worn out. From traveling to and from Scottsdale and having to immediately go back to work and then having a jam-packed weekend full of events, I’m exhausted. I think I need a weekend from the weekend! I saw The Fault in Our Stars this weekend. There was seriously not a dry eye in the theater at the end of the movie. Have you seen any good movies lately? Many months ago, Jason took me to Cracker Barrel on our way back from a road trip. Cheesy Hashbrown Casserole. Tortilla de Patatas- Spanish Potato Omelet. Barcelona. 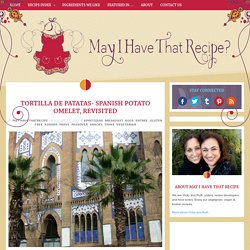 Home, sweet home… We got here about 5 days ago and we’ve been running around non stop, having a great time. So we thought we would start sharing some of our amazing experience with you by bringing back a recipe that’s 100% Spain: one of the most popular “tapas”, “Tortilla de patatas”, Spanish potato omelet. Hope you enjoy it!! “… As soon as we got home from the airport, my mom had a whole lot of delicious dishes ready for us. Ok, I might be a little bias. This potato omelet is one of the most popular dishes in Spain. So if you feel like taking a little trip without leaving your kitchen, go ahead, get cooking! Tortilla de Patatas- Spanish Potato Omelet, Revisited. Crispy Latkes Recipe. This photo originally appeared in FamilyFun Magazine Best known as a traditional food of Hanukkah, latkes are too good to eat just eight nights a year. 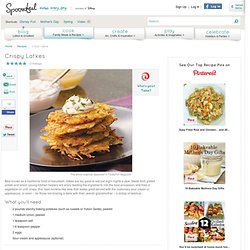 Made from grated potato and onion (young kitchen helpers will enjoy feeding the ingredients into the food processor) and fried in vegetable oil until crispy, this hash browns-like side dish tastes great served with the customary sour cream or applesauce, or even -- for those not sharing a table with their Jewish grandmother -- a dollop of ketchup. What you'll need 2 pounds starchy baking potatoes (such as russets or Yukon Golds), peeled 1 medium onion, peeled 1 teaspoon salt 1/4 teaspoon pepper 2 eggs Sour cream and applesauce (optional) How to make it Grate the potatoes and onions in a food processor using a medium-size shredding disk. 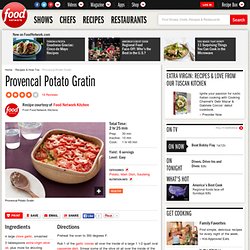 Rub 1 of the garlic cloves all over the inside of a large 1 1/2 quart oval casserole dish. Smear some of the olive oil all over the inside of the dish. Mince the rest of the garlic. Heat the rest of the oil in a saucepan over medium heat. Using a mandoline or vegetable slicer, slice the potatoes about 1/8-inch thick and add them to the pan with the water, salt, pepper to taste. Stir in the basil. Transfer the mixture to the prepared baking dish and shake the pan to distribute the potatoes evenly.

Perfect Potatoes au Gratin. Is there even such a thing as “bad” potatoes au gratin? 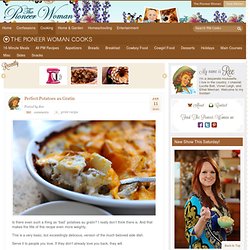 I really don’t think there is. And that makes the title of this recipe even more weighty. This is a very basic, but exceedingly delicious, version of the much-beloved side dish. Serve it to people you love. If they don’t already love you back, they will. Zee Cast of Characters: russet potatoes, heavy cream, whole milk, flour, garlic, salt, pepper, and a little softened butter. Good. Very, very, very good. Preheat the oven to 400 degrees, then scrub the potatoes so they’re very clean. It’s a strange religion. Slice the potatoes—not too thick, not too thin. Stack ‘em up as you go… And cut the stacks into fourths. Soon you’ll have a positively prodigious pile of potato pieces.

Say that fast five times. Now, in a bowl mix together the cream… The milk… And the flour. Now peel some cloves of garlic. Just be aware that four cloves in this recipe will result in a really garlicky flavor. Add the garlic to the bowl… Another third of the cream mixture…