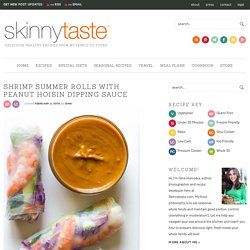 They are simple to make at home and can be filled with any type of protein and veggies you like. Typically they are also filled with glass noodles, but I left them out (not a fan) and used more veggies instead. The peanut dipping sauce is the real star of the show – to-die-for! To save time, I bought beautiful cooked shrimp from costco and pre-shredded carrots. The only tricky part is wrapping the rice paper, but after you do one, you get the hang of it (lots of you-tube videos out there). 17 Mouthwatering Ways To Eat Spaghetti Squash This Fall.

Sausage and Feta Stuffed Peppers - Nap-time Creations. Pizza Power Rankings: Updated list of the state's Top 25 pizzerias. There is chaos in that epicenter of pizza, that maelstrom of mozzarella, known as New Jersey. 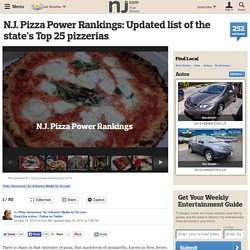 The updated N.J. Pizza Power Rankings, the definitive list of the state's best pizzerias, features 12 newcomers to the top 25. How, you might ask, can a pizzeria not on the initial list make the top 20, even top 10 this time around? Easy — that initial list was published six months ago. Dozens of new pizzerias have opened up; as you're reading this, I think four more just opened up. The reason for the drastic changes in the rankings is not so much that the established pizzerias have slipped, it's that the newcomers are darned good — and not always playing by the "rules.'' You want rabbit sausage and other out-of-the-box ingredients, you now can get it. Several newcomers on the list specialize in Neapolitan-style pizza, all the rage these days, with coal or wood-fired ovens. The N.J. 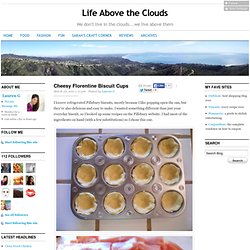 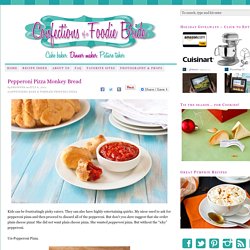 They can also have highly entertaining quirks. My niece used to ask for pepperoni pizza and then proceed to discard all of the pepperoni. How to Make Pizza Without Dough. I was getting kind of sick of ordering delivery pizza (this happens at least 2-3 times a month). 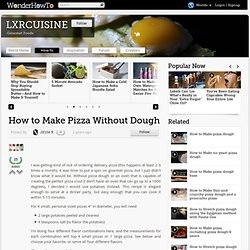 It was time to put a spin on gourmet pizza, but I just didn't know what it would be. Without pizza dough or an oven that is capable of creating the perfect pizza crust (I don't have an oven that can go up to a 1000 degrees), I decided I would use potatoes instead. This recipe is elegant enough to serve at a dinner party, but easy enough that you can cook it within 5-15 minutes. For 4 small, personal sized pizzas 4" in diameter, you will need: 2 large potatoes peeled and cleaned4 teaspoons salt (to flavor the potatoes)

Sesame Salmon Burgers with Dill Yogurt Sauce. I’m eagerly anticipating the day when I can describe completing my to do list as “getting my affairs in order.” You see, I’m reserving that kind of self-importance for the days when my “affairs” consist of more than binge watching Mad Men , sitting atop my counter while I lick a bowl of brownie batter (before it’s empty, mind you), and changing from one pair of pajamas to the next. It should be noted that the second pair of pajamas were quite the trade up.

On that day, in the somewhat near future, I’ll turn to Oprah and regretfully tell her that after lunch I simply cannot accompany her to her school in South Africa because “I’ve got to get my affairs in order.” Beg as she will, I simply can’t. There are affairs. Without getting too wrapped up in the details, I think I can safely say that my to-d0′s will involve a chocolate factory, high tea, crumpets, and a petty cash account. Exhibit A: Exhibit B: Stuffed Eggplant Recipe. Over the past weekend, while I was catching up on my feeds, my heart skipped a beat when I saw a beautiful photo of stuffed eggplants on La Tartine Gourmande.

The stunning visual was enough to convince me to make them. On my weekend grocery trip, I made sure to buy a firm and plump eggplant to make these stuffed shells of goodness. Grandma’s tip: run your finger over the eggplant and look closely – there shouldn’t be any tiny holes on it or you’ll have company when you cut it open. This is one heck of a recipe that’s awfully flavourful and indescribably comforting. Peppered Pork Chops. These Peppered Pork Chops have a little bit of a bite due to the cracked pepper, but the sauce adds great flavor and mellows the bite a bit. I served this with steamed brussel sprouts and flavored rice. Everyone loved it, especially my husband. I used green onions where this recipe called for leeks, but I bet it would be awesome with shallots too. I just used what I had on hand. While I have been menu planning in the background all along, I’ve decided to make myself more accountable by joining in on Menu Plan Monday. .