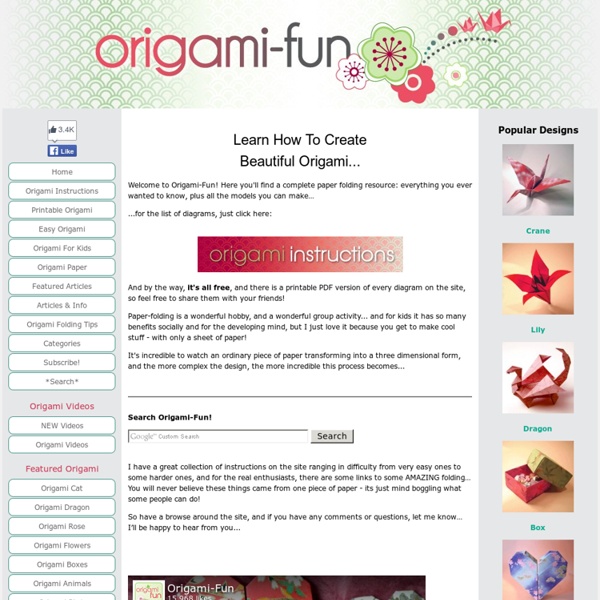 Welcome to Origami-Fun! Here you'll find a complete paper folding resource: everything you ever wanted to know, plus all the models you can make… ...for the list of diagrams, just click here: And by the way, it's all free, and there is a printable PDF version of every diagram on the site, so feel free to share them with your friends! Paper-folding is a wonderful hobby, and a wonderful group activity... and for kids it has so many benefits socially and for the developing mind, but I just love it because you get to make cool stuff - with only a sheet of paper! It's incredible to watch an ordinary piece of paper transforming into a three dimensional form, and the more complex the design, the more incredible this process becomes...

Joseph Wu Origami home > diagrams > download For the PDF files, you will need Adobe's Acrobat Reader. These diagrams are sorted by the designer of the model. In the description is also a ranking of the model's difficulty. In most cases, this ranking is based on my own assessment of the model's difficulty. The ranking system used is the one used by OrigamiUSA. KCP International The seaside has always had an allure for people with its rolling waves, sandy beaches, and countless interesting creatures. Many origami creators have been inspired to make designs that are reminiscent of the sea and its inhabitants. Here are three sea-inspired origami designs that are cute and easy to make: Origami Fish

Origami Kawasaki Rose - Origami Flowers Folding Instructions The Kawasaki Rose was invented by Toshikazu Kawasaki, an origami designer and math teacher in Japan. The Kawasaki rose is actually a family of origami rose designs, all based on a unique curling technique that creates the illusion of overlapping rose petals. It's a challenging origami design, but well worth it to fold. Our step by step photos will guide you through. Carambola Flowers by Carmen Sprung If you’ve been following me on Flickr for a while, you’ve probably seen this picture of Carambola Flowers before – I folded them ages ago! But since my Pro account is going to expire in a few days time (and I don’t feel like upgrading it again), a lot of my old photos won’t be displayed anymore. So I decided it would be a good idea to share the very best of them on my blog! These absolutely beautiful origami flowers were designed by Carmen Sprung and I just love them! Each flower is made from a single sheet of paper, not from a square though, but from a pentagon.

Origami Diagrams Folding Help: How to Divide a square or rectangle into 3rds, 5ths or 7ths is here. How to cut a Pentagon from a square is here. How to fold a Stretched Bird Base is here. FREE EASY ORIGAMI FLOWERS « EMBROIDERY & ORIGAMI Origami Money Flowers: Origami Money Flowers | Simple Design Learn how to make free simple origami money flowers from US dollar bill or any other currency that you have. Currently providing step by step origami Easy Origami Folding Instructions : How to Make an Origami Flower Easy paper folding instructions on how to make an origami flower in this free how-to video clip lesson. Expert: Michael Webb Bio: Michael Webb has been an

Kusudama Tutorial part 2 Today I am showing you part 2 of how to make a kusudama ball. You can find the first part here. In part 1, I showed you have to make the individual flowers; you should now have 12 flowers made from 60 individual petals. For part 2 you will need: 12 flowers (made from 60 petals)GlueString or a ribbonBead(s) As you might be able to see from the finished kusudama at the top of the page, I made 6 flowers from blue paper and 6 flowers from a recycled map. Simple Trick To Make Your Own Origami Bookmarks Your cat has started to doubt your loyalty what with the number of dog-eared pages in all your books; you’re sick of converting page numbers such as 141 and 3270 into mnemonics like “tired” and “mongoose.” Does this sound like you? Fret no more! Using this simple German paper folding technique, you can create an origami bookmark that has no trace of dogs. Not convinced? Listen to what this twitter user had to say:

Origami Diagrams for Download These pages present diagrams that may be freely downloaded and used for personal enjoyment. While "traditional" origami models are in the public domain, the vast majority of published origami designs are of recent authorship and therefore cannot be published or used commercially without obtaining permission from their creators and/or diagrammers. OrigamiUSA is very concerned about protecting and respecting the rights of origami artists, authors, and diagrammers: please see our copyright page for more details. For all of the downloadable diagrams here, in general, the following applies: the work is protected by copyrightboth the creator (if not ‘Traditional’) and the diagrammer have rights in the workthis version of the work is being distributed by OrigamiUSA with permission, for personal use onlyyou may not redistribute it without permission from the relevant copyright-holdersfor redistribution or commercial usage, please contact us at copyright@origamiusa.org.

Balloon lights tutorial Here in New Zealand we are now in the middle of winter, and when playing around with some LED fairy lights I thought I would combine my love for origami and bringing some winter sparkle to our house. And so the balloon lights were born!! Ok let’s get started with the tutorial! This is what you need for this project: Pretty paper (appr. 20 sheets, mine were 90 x 90mm) on a white or light background. I went to Canon Chiyogami patterns and printed off Ya-mon in red. paper plants All of my houseplants go through a sort of trial by fire. Or trial by neglect, to be more accurate. If they can withstand my general gardening ignorance and sporadic-at-best attention, they get to stay.

DIY Design Community « Keywords: DIY, pendant, lighting, paper Remember those folded up fortune-tellers from your elementary school days? Some kids called them cootie-catchers, but I never really understood the method behind the madness with that one. But I digress, because paper folding prowess was not in vain. Take a longing glance at this beautiful DIY faceted pendant sphere, completely covered in small fortune tellers! This project requires little more than printer paper and patience to complete, and would look stunning in an entry, a hallway, or a dining room.