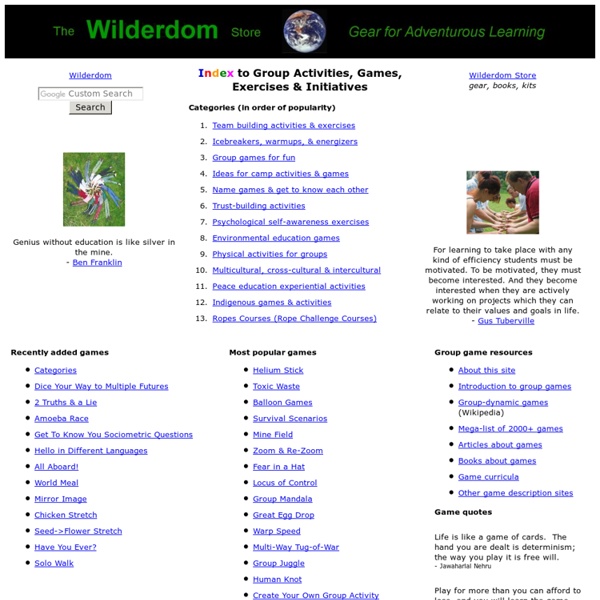 Group game resources Game quotes Life is like a game of cards. The hand you are dealt is determinism; the way you play it is free will. - Jawaharlal Nehru Play for more than you can afford to lose, and you will learn the game. - Winston Churchill Once the game is over, the King and the pawn go back in the same box. - Italian proverb You can discover more about a person in an hour of play than in a year of conversation. -Plato My work is a game,a very serious game. - MC Escher Seek, above all, for a game worth playing. - Robert S. de Ropp Make games important but not predominant. - Kurt Hahn Whatever games are played with us, we must play no games with ourselves. - Ralph Waldo Emerson

First Class Ice Breakers Using Mobile Devices I previously wrote about the importance of beginning a class focusing on the learners in the room as opposed to the content to be covered in Beginning the School Year: It’s About Connections Not Content. Most classes, starting with about middle school, begin the school year with reviewing the content to be covered, expectations regarding grades, and other academic information provided by the teacher or instructor. The human or social element is often disregarded.What is interesting is that most learners enter the classroom wondering who is in the course. They want to know about the teacher and the people in the class not what material is to be covered. What this says to me as an educator is that it all begins with a social connection – between the educator and the learners, and between the learners themselves.

Seeds for Change - training and support for campaigners. "Tell me, and I will forget. Show me, and I may remember. Involve me, and I will understand." Tactile-Kinestheti Tactile-Kinesthetic Learners Making up about 5% of the population, tactile and kinesthetic learners absorb information best by doing, experiencing, touching, moving or being active in some way. Enjoy feeling, discovery and action Remember by using tools, building models and manipulating things Learn through emotions, touch, movement and space Enjoy demonstrations of concept demonstrations Master skills through imitation and practice. Benefit from hands-on teaching techniques Find it difficult to sit still for long periods of time. Remember who did what in the past, rather than what they said or how they looked. Prefer to stand, walk about or use large motor muscles when learning.

Quick and Dirty Tips™ One of the most frequent questions I’m asked is whether it’s acceptable to end a sentence with a preposition. I know many of you were taught that you shouldn’t end a sentence with a preposition, but it’s a myth. In fact, I consider it one of the top ten grammar myths because many people believe it’s true, but nearly all grammarians disagree, at least in some cases (1, 2, 3, 4, 5, 6, 7, 8). So before I lose you, let's back up. Elimination games with young learners ♫ One potato, two potatoes… ♫ Many of us remember playing elimination games like Musical Chairs and Simon Says when we were young. These are games where you start with a group, and each round, one or more players is “out” and eliminated from the game. As you get closer and closer to the end of the game, the tension builds, and it can be a lot of fun (and beneficial for young learners). However, for some very young learners, these kinds of elimination games can be very upsetting. It’s not so much that all of the kids want to win, but they want to keep playing!

Participatory Methods This research report presents the findings of case study research with youth in six locations in Zimbabwe, carried out within the Power, Violence, Citizenship and Agency (PVCA) programme. It shows how young people experience growing up as citizens in a country known for its repressive regime, and highlights the differences for young men and young women. Young people consider political violence as one of many forms of violence and other challenges they face in life. Election periods bring increased risk, when youth feel targeted.

Educational Technology Buzzwords Jul 22 Thanks to Boundless and Getting Smart for putting together and sharing this great infographic outlining the latest trends in Educational technology. It helps to cut through all the buzzwords flying around and pinpoint what we may or may not be incorporating in our learning and teaching. It also gets me thinking a lot about educational technology and brings up a lot of questions. Do we need this many technology based eystems in the current education climate? The 35 Best Web 2.0 Classroom Tools Chosen By You 100 Web 2.0 Tools Every Teacher Should Know About 44.24K Views 0 Likes We're always trying to figure out the best tools for teachers, trends in the education technology industry, and generally doing our darnedest to bring you new and exciting ways to enhance the classroom. But I wanted t... 20 Free and Fun Ways To Curate Web Content

Blatant Incitement Project - BLINC "The Blatant Incitement Project exists to empower people to organise themselves without hierarchy, for radical action towards social ecological change, by sharing skills, knowledge, and inspiration..." The information below was correct as of January 2006, for Britain. If you don't see something on offer, just ask and we'll see if we can find someone to help out. If you have something you can share with others, or if there is something your group would like to learn more about, get in touch Offers will be posted here - requests will be passed on to the relevant people

The Teacher’s Quick Guide To Pinterest The following article is by Julie Delello of the University of Texas at Tyler. She can be reached at jdelello[at]uttyler.edu if you have any questions or comments. Children learn social skills by interacting freely with peers. Playgrounds provide an opportunity for children from different classrooms to interact and enhance skill development. What if there was a place for the teachers to play, learn new skills, and network with others?

Beginning the School Year: It’s About Connections Not Content Most classes, starting with about middle school, begin the school year with reviewing the content to be covered, expectations regarding grades, and other academic information provided by the teacher or instructor. The human or social element is often disregarded. What is interesting is that most learners enter the classroom wondering who is in the course. They want to know about the teacher and the people in the class not what material is to be covered. Bookchin: living legacy of an American revolutionary An interview with Debbie Bookchin on her father’s contributions to revolutionary theory and the adoption of his ideas by the Kurdish liberation movement. Editor’s note: Below you will find an interview with Debbie Bookchin, daughter of the late Murray Bookchin, who passed away in 2006. Bookchin spent his life in revolutionary leftist circles, joining a communist youth organization at the age of nine and becoming a Trotskyist in his late thirties, before switching to anarchist thought and finally ending up identifying himself as a ‘communalist’ after developing the ideas of ‘libertarian municipalism’. Bookchin was (and remains) as influential as he was controversial. His radical critiques of deep ecology and ‘lifestyle anarchism’ stirred up a number of heated debates that continue to this day.