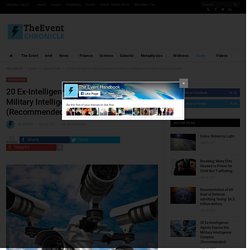 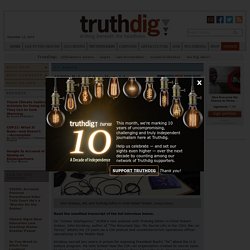 (Joshua Scheer) Read the unedited transcript of the full interview below. On “Scheer Intelligence,” KCRW’s new podcast with Truthdig Editor-in-Chief Robert Scheer, John Kiriakou, author of “The Reluctant Spy: My Secret Life in the CIA’s War on Terror,” details his 15 years as a CIA analyst and counterterrorism operations officer specializing in the Middle East.

Kiriakou served two years in prison for exposing President Bush’s “lie” about the U.S. torture program. He tells Scheer how the CIA—an organization created to recruit spies to steal secrets—evolved into a “paramilitary force,” how the U.S. drone program “creates terrorists” by killing innocent civilians, and how the Obama administration uses the Espionage Act as a political tool to threaten whistleblowers. Additionally, Kiriakou challenges the government’s claim that Americans have to surrender their civil liberties to fight terrorist groups around the world. JK: Yes. CIA Flashback: “We’ll Know Our Disinformation Program Is Complete When Everything the American Public Believes Is False.” Human Rights group robbed after suing CIA for documents detailing their role in massacring 75,000 Salvadorans. “I Did It For America!” – Dying CIA Agent Claims He Assassinated Marilyn Monroe and 36 Others –

78-year old retired CIA officer Normand Hodges has made an astonishing confession on his deathbed. 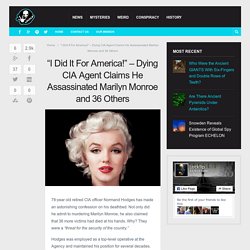 Not only did he admit to murdering Marilyn Monroe, he also claimed that 36 more victims had died at his hands. Why? They were a “threat for the security of the country.” Hodges was employed as a top-level operative at the Agency and maintained his position for several decades. He claims that over the course of his career, the CIA often used him as a hitman. Between 1959 and 1972, Hodges carried out 37 assassinations, ordered because “the CIA had its own agenda.” His most important victim was none other than America’s first major sex symbol, Marilyn Monroe. We had evidence that Marilyn Monroe had not only slept with Kennedy, but also Fidel Castro,” said Hodges. Marilyn Monroe died at home in her bedroom on August 5, 1962 between midnight and 1:00 AM. Having been a trained sniper and martial arts expert, Hodges said his experience proved to be beyond valuable to the CIA. Ian Paxton. It’s Not Just Spying – How The NSA Has Turned Into A Giant Profit Center For Corrupt Insiders.

Dear NSA Employees, You Now Have a Green Light to Loot and Pillage. 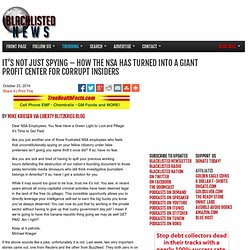 It’s Time to Get Paid:Are you just another one of those frustrated NSA employees who feels that unconstitutionally spying on your fellow citizenry under false pretenses isn’t giving you same thrill it once did? If so, have no fear.Are you are sick and tired of having to spilt your precious working hours defending the destruction of our nation’s founding document to those pesky terroristic media dinosaurs who still think investigative journalism belongs in Amerika? If so, have I got a solution for you.While it may sound too good to be true, trust me it’s not. You see, in recent years almost all crony-capitalist criminal activities have been deemed legal in the land of the free (to pillage).

This incredible opportunity allows you to directly leverage your intelligence skill-set to earn the big bucks you know you’ve always deserved. If the above sounds like a joke, unfortunately it is not. As if Mr. Australia, ‘Better Slave than Dead’ Jon Rappoport | Activist Post Pine Gap, Australia Remember the name “Pine Gap.” 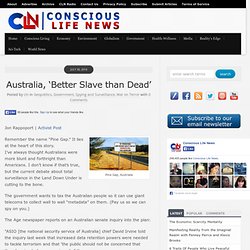 It lies at the heart of this story. I’ve always thought Australians were more blunt and forthright than Americans. I don’t know if that’s true, but the current debate about total surveillance in the Land Down Under is cutting to the bone. The government wants to tax the Australian people so it can use giant telecoms to collect wall to wall “metadata” on them. Former NSA Chief Cashing In on Spook Background, Making $1 Million a Month to Consult. 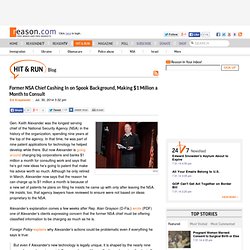 Keith Alexander was the longest serving chief of the National Security Agency (NSA) in the history of the organization, spending nine years at the top of the agency. In that time, he was part of nine patent applications for technology he helped develop while there. But now Alexander is going around charging big corporations and banks $1 million a month for consulting work and says that he’s got new ideas he’s going to patent that make his advice worth so much. Although he only retired in March, Alexander now says that the reason he can charge up to $1 million a month is because of a new set of patents he plans on filing he insists he came up with only after leaving the NSA.