What Are Noun Clauses? Your score: Click on the one with a noun clause in bold: A. 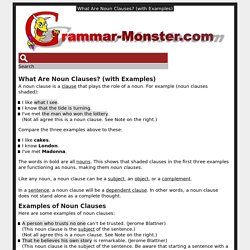 Basic research is what I am doing when I don't know what I am doing. (Wernher von Braun, 1912-1977) B. Curiosity killed the cat, but for a while I was a suspect. Lots of noun clauses in English start with that, how, or a "wh"-word (i.e., what, who, which, when, where, why). I know that it happened.I know how it happened.I know why it happened.DEFINITION OF A NOUN CLAUSE A noun clause is a clause that functions as a noun. I've met the man who won the lottery. Noun Clauses: Embedded Questions - An English-Zone.Com Mini-Lesson and Quiz. LESSON PLAN: Noun clauses. Level: Pre-intermediate Target Language: noun Clauses Skill: Writing Anticipated problems: They may experience some difficulty to distinguish between noun clauses and relative clauses. 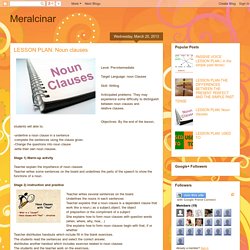 Objectives: By the end of the lesson, students will able to; -underline a noun clause in a sentence -complete the sentences using the clause given. Stage 1) Warm-up activity Teacher explain the importance of noun clauses Teacher writes some sentences on the board and underlines the parts of the speech to show the functions of a noun. Stage 2) instruction and practice Teacher writes several sentences on the board. Stage 3) Closure Teacher gives a quiz Students summarizes what they have learned The following text was taken the following site. Teaching Noun Clauses ( Today's topic is noun clauses.

Warm up Exercise One: Choose a verb plus 'that' from the above groups that make sense in these sentences: Experts __________________ exercise is important for health. References: 1. Exercises2( 1. EXERCISES 3( LESSON PLAN: Noun clauses. Noun Clauses: Embedded Questions - An English-Zone.Com Mini-Lesson and Quiz. Grammar Lesson: The Noun Clause. A noun clause (a group of words that has at least one subject and one verb) is a subordinate or dependent clause that functions, as its name suggests, as a noun. 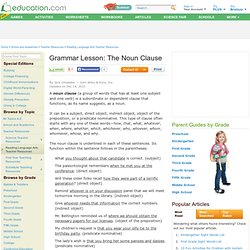 It can be a subject, direct object, indirect object, object of the preposition, or a predicate nominative. This type of clause often starts with any one of these words—how, that, what, whatever, when, where, whether, which, whichever, who, whoever, whom, whomever, whose, and why. The noun clause is underlined in each of these sentences. Its function within the sentence follows in the parentheses. 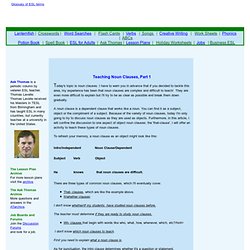 I have to warn you in advance that if you decided to tackle this area, my experience has been that noun clauses are complex and difficult to teach! They are even more difficult to explain but I'll try to be as clear as possible and break them down gradually. A noun clause is a dependent clause that works like a noun. You can find it as a subject, object or the compliment of a subject. To refresh your memory, a noun clause as an object might look like this: Subject Verb Object There are three types of common noun clauses, which I'll eventually cover.

That- clauses, which are like the example above. I don't know whether/if my students have studied noun clauses before. The teacher must determine if they are ready to study noun clauses. Wh- clauses that begin with words like who, what, how, whenever, which, etc? LESSON PLAN: Noun clauses.