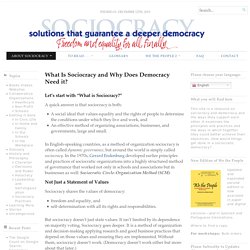 Collective Story Harvest To Go. Art of Hosting. Systems Thinking Workbook Smart CSOs Lab. A New Weave of Power, People & Politics: The Action Guide for Advocacy and Citizen Participation. Participatory Methods. As John Gaventa, political sociologist, educator and former leader of the Participation Team, observed in a 2010 paper Power and Making Change Happen, “whether concerned with participation and inclusion, realising rights or changing policies, more and more actors seeking change are also becoming aware of the need to engage with and understand this phenomenon called power.” 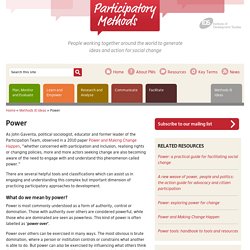 There are several helpful tools and classifications which can assist us in engaging and understanding this complex but important dimension of practicing participatory approaches to development. What do we mean by power? Power is most commonly understood as a form of authority, control or domination. Those with authority over others are considered powerful, while those who are dominated are seen as powerless. 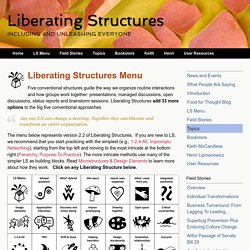 Liberating Structures add 33 more options to the big five conventional approaches. Any one LS can change a meeting. Together they can liberate and transform an entire organization. The menu below represents version 2.2 of Liberating Structures. Using Story to Change Systems. In Liverpool, an exhausted homeless shelter worker puts her head in her hands at the end of another long day. 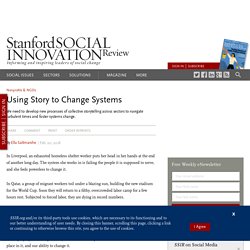 The system she works in is failing the people it is supposed to serve, and she feels powerless to change it. In Qatar, a group of migrant workers toil under a blazing sun, building the new stadium for the World Cup. Soon they will return to a filthy, overcrowded labor camp for a few hours rest. Subjected to forced labor, they are dying in record numbers. Blog. Permaculture Facilitators Resource Book Training Assessment. Reimagining Activism: A practical guide for the Great Transition - How Change Happens - Duncan Green. Changing Systems, Changing Lives. © None on Record - 2016 Changing Systems, Changing Lives 16 septembre 2015 | Par Amina Doherty, Kamardip Singh et Angelika Arutyunova Women and girls are in the public eye, recognized as key agents in development, like never before. 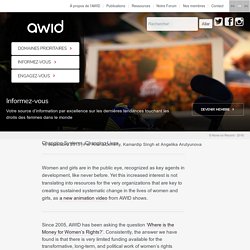 Yet this increased interest is not translating into resources for the very organizations that are key to creating sustained systematic change in the lives of women and girls, as a new animation video from AWID shows. Since 2005, AWID has been asking the question ‘Where is the Money for Women’s Rights?’. Over the past five years, the corporate sector as funder and a relatively new actor in women’s rights has launched programs and pledged large amounts of money for the empowerment of women and girls.

These figures make clear the disconnect between the private sector’s investments in women and girls, and the social change efforts being led by women’s rights organisations. What really works in the struggle to improve the lives of women and girls around the world? Tools for Systems Thinkers: Getting into Systems Dynamics… and Bathtubs. In the last chapter of this series, The 6 Fundamental Concepts of Systems Thinking, I explored some of the key concepts of systems thinking such as interconnectedness, synthesis, emergence, causality and feedback loops. 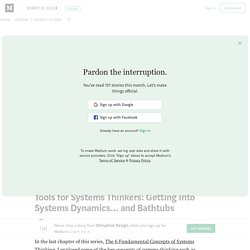 In this chapter, I will delve into what defines a system and move into more detail with stocks and flows in systems (which, for some reason, is often described using a bathtub analogy — something that I find very odd!). Before I start let me clarify something. Ib how change happens summary 020317 en. Critical Junctures Ox HB final. Rob Hopkins – Imagination taking power. Intro systems thinking and tools for systems thinking 20180417. Ten Veteran Organizers on the Key to Effective Activism. This story appears in the May issue of VICE magazine. 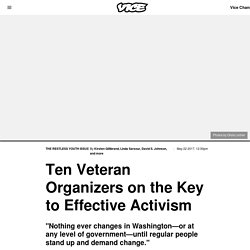 Click HERE to subscribe. By Kirsten Gillibrand, United States senator for New York. Francis Fukuyama. The New York Times bestselling author of The Origins of Political Order offers a provocative examination of modern identity politics: its origins, its effects, and what it means for domestic and international affairs of state In 2014, Francis Fukuyama wrote that American institutions were in decay, as the state was progressively captured by powerful interest groups. 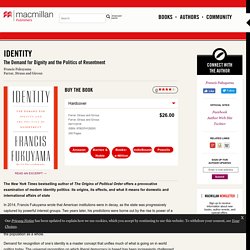 Two years later, his predictions were borne out by the rise to power of a series of political outsiders whose economic nationalism and authoritarian tendencies threatened to destabilize the entire international order. These populist nationalists seek direct charismatic connection to “the people,” who are usually defined in narrow identity terms that offer an irresistible call to an in-group and exclude large parts of the population as a whole. Developing and Embedding Organisational Values and Behaviours. Charity news, analysis and events. Grassroots Movements as Global Actors. Raoul Martinez on writing this year's essential text for thinking radicals.

‘If our choices are produced by a brain we didn’t choose, I don’t think it makes sense to say we are truly responsible for our actions,” says Raoul Martinez, pausing to sip from his glass of stout. 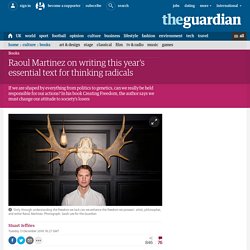 I eye him over my cappuccino. If I spilled his pint now, would I deserve punishment for this action, in the form of a punch on the nose from the 33-year-old author of this season’s must-have text for thinking radicals? Apparently not. “If that is true,” resumes Martinez, “then the moment we blame or say certain actions deserve punishment seems to be incoherent.” This may seem the stuff of a million undergraduate philosophy essays on the free will versus determinism puzzle. What makes his arguments unusual is that they lead to some chastening conclusions. The book comes at a timely moment.

Building intentional networks that drive impact (part 1) These days everyone is familiar with some type of network – whether that's their professional network on LinkedIn, their social network on Facebook, or the informal web of relationships within your local community. 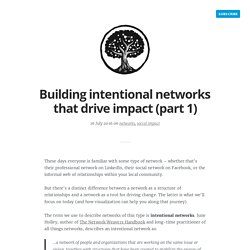 But there's a distinct difference between a network as a structure of relationships and a network as a tool for driving change. BuildingNetworks. Leverage Points: Places to Intervene in a System - The Donella Meadows Institute. By Donella Meadows~ Folks who do systems analysis have a great belief in “leverage points.” These are places within a complex system (a corporation, an economy, a living body, a city, an ecosystem) where a small shift in one thing can produce big changes in everything. This idea is not unique to systems analysis — it’s embedded in legend. The silver bullet, the trimtab, the miracle cure, the secret passage, the magic password, the single hero who turns the tide of history.

The nearly effortless way to cut through or leap over huge obstacles. The Barefoot Guide Connection - Home. Reflect Mother Manual - 2012. Henry Giroux. Henry Giroux (born September 18, 1943), is an American and Canadian scholar and cultural critic. One of the founding theorists of critical pedagogy in the United States, he is best known for his pioneering work in public pedagogy, cultural studies, youth studies, higher education, media studies, and critical theory. In 2002 Routledge named Giroux as one of the top fifty educational thinkers of the modern period.[1] A high-school social studies teacher in Barrington, Rhode Island, for six years,[2] Giroux has held positions at Boston University, Miami University, and Penn State University. Critical pedagogy: schools must equip students to challenge the status quo.

The pedagogy popularised by E.D.Hirsch, and recently promoted by the likes of Civitas, reduces teaching into nothing more than a bleak transmission model of learning. Hirsch's theory focuses on what he calls "cultural literacy". He argues that all students need a "core knowledge" so they can develop into better citizens. In one of his books, he lists various facts, phrases and historical events that he believes all young Americans should be aware of, including the Founding Fathers and Adirondack Mountains. It's Hirsch's belief that if children aren't taught such cultural literacy at home, responsibility for it should lie with schools. The Educational Theory of Paulo Freire. ©2001 NewFoundations Paulo Freire's Educational Theory RETURN edited 5/1/14. Paulo Freire. Augusto Boal. Bookchin: living legacy of an American revolutionary. An interview with Debbie Bookchin on her father’s contributions to revolutionary theory and the adoption of his ideas by the Kurdish liberation movement.