Create Your Own Comic 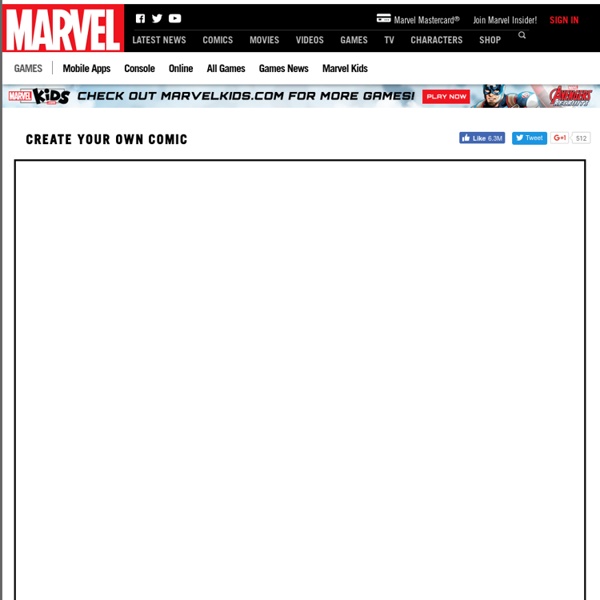 The Meaning of khrónos in Ancient Greek: A Diachronic Perspective BibTeX Bookmark OpenURL Abstract 20 Free Tools for Making Comics and Cartoons for Teaching and Learning There are so many good free tools for creating comics and cartoons on the web, as well as apps for tablets and smartphones. I've built out a list of fun tools I am looking forward to trying out over the upcoming holiday break. I can't wait to brainstorm creative ways to leverage these in lessons!

Comic Creator The Comic Creator invites students to compose their own comic strips for a variety of contexts (prewriting, pre- and postreading activities, response to literature, and so on). The organizers focus on the key elements of comic strips by allowing students to choose backgrounds, characters, and props, as well as to compose related dialogue (shown at left). This versatile tool can be used by students from kindergarten through high school, for purposes ranging from learning to write dialogue to an in-depth study of a formerly neglected genre. The tool is easy to use, made even easier with the Comic Strip Planning Sheet, a printable PDF that comic creators can use to draft and revise their work before creating and printing their final comics. After completing their comic, students have the ability to print out and illustrate their final versions for feedback and assessment.

Renaissance: Historical Background In the 12th cent. a rediscovery of Greek and Roman literature occurred across Europe that eventually led to the development of the humanist movement in the 14th cent. In addition to emphasizing Greek and Latin scholarship, humanists believed that each individual had significance within society. The growth of an interest in humanism led to the changes in the arts and sciences that form common conceptions of the Renaissance. The 14th cent. through the 16th cent. was a period of economic flux in Europe; the most extensive changes took place in Italy. After the death of Frederick II in 1250, emperors lost power in Italy and throughout Europe; none of Frederick's successors equaled him. Power fell instead into the hands of various popes; after the Great Schism (1378–1415; see Schism, Great), when three popes held power simultaneously, control returned to secular rulers.

Create a new strip You are using an ancient web browser, Stripgenerator does not work properly in it.Get rid of Internet Explorer 6! Upgrade to a new version or use another browser like Chrome, Opera, Safari or Firefox. StripGenerator Say hello to manoli_martin 384,910 Members 1,059,569 Strips Sign in Linguistic errors and the Renaissance The linguistic error was invented during the Renaissance. This will be one of the topics of a paper by the Dutch linguist Joop van der Horst on Saturday, at a public symposium organised by the Leiden University Centre for Linguistics. Linguistic correctness was not an issue, according to van der Horst, until the language was codified into grammars, dictionaries and spelling guides. In the Netherlands, this happened earlier than in the UK, when the linguistic error did not become an issue until Dryden started mordernising Shakespeare’s language. He also started to revise his own work in order to try and get rid of preposition stranding. Van der Horst doesn’t mention the usage guide, perhaps because in The Netherlands it does not have a status comparable to English speaking countries.

Creator Processing ... Personal $ Svg $20 ✓ Up to $75 merchandises for personal use. Apps - Rory's Story Cubes “My daughter didn’t want to stop playing. She was so eager to create stories orally and now wants to also start writing them. I can’t wait to try this in my own classroom. Very impressed.” Teacher mum from Australia Analysis > Medieval and Renaissance Conceptions of Analysis 1. Medieval Philosophy In the supplementary document on Ancient Conceptions of Analysis, three particular sources of conceptions of analysis were identified—ancient Greek geometry, Plato’s dialogues and Aristotle’s Analytics. The interconnections between these alone are complex; but there were other influential conceptions in antiquity as well—most notably, Galen’s amalgam of previous methodologies in the context of medicine, and the Neoplatonists’ theological transformation of Plato’s method of division. Given this complexity, and the fragmentary nature of the material upon which writers in the medieval period drew, it is not surprising that making sense of medieval methodologies is an interpretive nightmare.

The Norton Anthology of Western Literature Skip to Section Menu | Content | Volume Menu Overview History and Culture While Renaissance means “rebirth,” the term more accurately pertains to a vision that the artists and intellectuals of the Renaissance possessed of the world of antiquity, which they then saw “reborn” in their own works. The Norton Anthology of English Literature: The Middle Ages: Topic 4: Overview From our point of view, it is appropriate to think of the language and literature of Anglo-Saxon England as "Old English," because the language is the remote ancestor of the English spoken today. Yet for the inhabitants of Anglo-Saxon England, the language was, of course, not old, and did not come to be referred to generally as "English" until fairly late in the period. The earliest reference given in the Oxford English Dictionary is 890.

Creativity Workshops Hanoch Piven Piven’s art is about communicating through fun and playfulness by reinventing the meaning of regular objects, and by inviting viewer active participation. Taking this participation into a natural next step, throughout the last 10 years Piven has conducted international workshops based on the principles of his own collage technique, encouraging communication and creativity through the use of common found objects. The Workshop has been embraced by educators, art therapists and management consultants as an efficient tool for introspection and communication through play. These are some of the organizations which have enjoyed workshops with Piven: WPP, Microsoft, Pfizer, Orange, Amdocs, CAFA Beijing, The School of Visual Arts, The Society of Illustrators of NY and many more.