To file. TO WATCH. READ. Wikileaks - Julian Assange: Google Is Not What It Seems. Occupy Wall St. - Photos du journal. Corporations, Lobbyists, Politicians and... - Corporations, Lobbyists, Politicians and Banks, Can you not? Revolution News - PALESTINE Freedom of Worship,... Kennetcook fracking wastewater might go to Amherst - Local - Nova News Now. The treated water is from the oil and gas exploration that took place in 2007 and 2008 in Kennetcook. 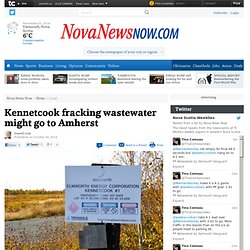 “It’s fair to say that the acceptance of this product by municipally-owned facilities in Nova Scotia has been somewhat controversial. It’s important to note that with the reverse osmosis process another significant layer of process has been added to that which was the case when other municipalities declined to accept the product,” Amherst chief administrative officer Greg Herrett told town council Oct. 30 during a special meeting. Occupy Calgary - p New solar power material converts... The Young Turks - Watch a clip of this new hoverboard in... Techdirt - The big broadband players keep trying to tell... AlterNet - Lesson 3. Stay high. Thomas Mulcair - Photos du journal. Truthdig - In light of Loura Poitras's new movie "Citizen... Income-splitting changes coming from Tories. Prime Minister Stephen Harper will on Thursday unveil a scaled-down version of the Conservatives’ 2011 campaign commitment to allow income-splitting by parents with children younger than 18 once the federal budget is balanced. 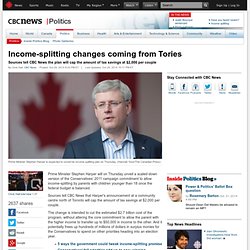 Sources tell CBC News that Harper's announcement at a community centre north of Toronto will cap the amount of tax savings at $2,000 per couple. The change is intended to cut the estimated $2.7 billion cost of the program, without altering the core commitment to allow the parent with the higher income to transfer up to $50,000 in income to the other. And it potentially frees up hundreds of millions of dollars in surplus monies for the Conservatives to spend on other priorities heading into an election year. There are reports that those priorities could include an expansion of the universal child care benefit, which now pays $100 a month for each child regardless of income. Mic - Pot smokers are in smart company. Mic - Sometimes kids know better than teacher.

Gov Jesse Ventura on Abolishing... - Breaking The Set. The Daily Beast - One of Saudi Arabia's preeminent... CBC News - Income splitting would not benefit single... As the mid-term elections bears down... - Global Research (Centre for Research on Globalization) "At the end of the day, that's our own... - HuffPost Black Voices. It was created under the guise of... - CommonDreams.org. "Because even my ‘friends’ told me I... - The Toronto Star. The Young Turks - Dave Rubin discusses the importance of... Things are getting real - Ground Zero with Clyde Lewis. Truthdig - ‘We Never Managed to Relax’ After World War II...

The world’s 100 richest people earned a... - Collective Evolution. "... I was sharing the special moment... - The Huffington Post Canada. How long do you think this will last? - HuffPost Politics. Mic - There shouldn't be a double standard for a sex crime. Occupy Canada - Dr. Anthony Hall, professor of... Occupy Canada - Dr. Anthony Hall, professor of... Facebook. Being Liberal - (M) How does anyone take this guy... Techdirt - As we've pointed out in the past, the wireless... The court also ruled that Warg should... - The Pirate Network. With George W. Bush’s wars on Iraq and... - Global Research (Centre for Research on Globalization) Salon - WATCH: Islam debate got heated again on Bill... Democracy Now! - After World War II, thousands of Nazis... Welcome to Facebook - Log In, Sign Up or Learn More. It seems such a depiction is just fine... - The Toronto Star. There's "No Honor In Racism" - HuffPost Black Voices.

Conservatives are trying to scare you... - Media Matters for America. Mic - This is happening in America's public school... EFF writes an open letter to Rupert... - Electronic Frontier Foundation (EFF) PoliticusUSA - PoliticusUSA a partagé un lien. "I don't think he much likes Muslims" - The Huffington Post Canada. Daily Kos - Maybe they should change their name to... Libya’s invasion by the West was not for... - Global Research (Centre for Research on Globalization) Occupy Calgary - p Economists Say We Should Tax The Rich... Where Right-Libertarianism Goes Wrong. Libertarianism is, in theory, no defender of the rich and powerful who must always be subject to market competition. 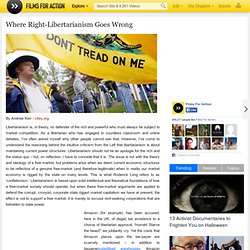 As a libertarian who has engaged in countless classroom and online debates, I’ve often asked myself why other people cannot see that. However, I’ve come to understand the reasoning behind the intuitive criticism from the Left that libertarianism is about maintaining current power structures. Facebook. Salon - "There is now between ten and twenty times as much... Occupy London - "No article or comment on Twitter can... AlterNet - Felicia Day is worried about being "doxxed."...

FACT: President Obama's approval rating... - Media Matters for America. "Come on, Democrats. You gave people... - Talking Points Memo. Shane Smith - This should worry every country in the list.... Mother Jones - "You can squint and look really hard, but... TheAnonNews - Facebook has never had much of a reputation... Occupy Calgary - p RCMP confirms it’s investigating... The Other 98% - The Other 98% a partagé une photo de Fight... Addicting Info - Rush Limbaugh blames men's bad behavior... Occupy Calgary - p If the news cycle is 24 hours, the...

"What does the history of the N-word... - HuffPost Black Voices. Facebook. Occupy Wall St. - Hey Democratic Party, you want... RT America - Outspoken against the capitalist system and... ..."there isn't much difference between... - The Crisis Magazine. ‫قناة الجزيرة مباشر - Aljazeera Mubasher Channel. FCC reportedly close to reclassifying ISPs as common carriers.

The head of the Federal Communications Commission (FCC) is reportedly close to proposing a "hybrid approach" to network neutrality in which Internet service providers would be partially reclassified as common carriers, letting the commission take a harder stance against Internet fast lane deals. 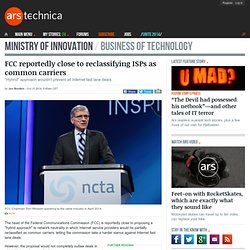 However, the proposal would not completely outlaw deals in which Web services pay for faster access to consumers. As reported Thursday by The Wall Street Journal, the broadband service that ISPs offer to consumers would be maintained as a lightly regulated information service. RT - RT a partagé un lien. Usually, in a defamation suit, the two... - Electronic Frontier Foundation (EFF) TomDispatch - Good job, Washington! (The last post for me... Naomi Wolf - Via Edgars. And I am outraged for one. "... Techdirt - We've heard some mumbling about one of the main... New Study Shows Internet Users Caught in the Crossfire in ISPs’ War Against Edge Providers. Almost any time you access the Internet, your computer transmits and receives data that travels across not only your own Internet provider’s network, but also the networks of Internet backbone providers and other ISPs before reaching its final destination. 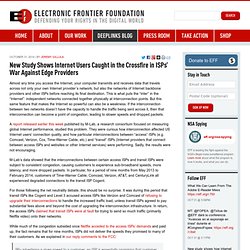 This is what puts the “inter” in the “Internet”: independent networks connected together physically at interconnection points. But this same feature that makes the Internet so powerful can also be a weakness. If the interconnection between two networks doesn’t have the capacity to handle the traffic being sent across it, then that interconnection can become a point of congestion, leading to slower speeds and dropped packets. A report released earlier this week published by M-Lab, a research consortium focused on measuring global Internet performance, studied this problem. They were curious how interconnection affected US Internet users’ connection quality, and how particular interconnections between “access” ISPs (e.g. Making Connections to Facebook more Secure. Facebook, hidden services, and https certs. 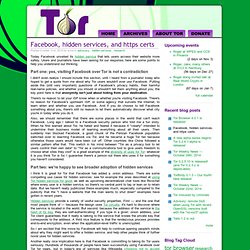 Users and journalists have been asking for our response; here are some points to help you understand our thinking. Part one: yes, visiting Facebook over Tor is not a contradiction I didn't even realize I should include this section, until I heard from a journalist today who hoped to get a quote from me about why Tor users wouldn't ever use Facebook. Putting aside the (still very important) questions of Facebook's privacy habits, their harmful real-name policies, and whether you should or shouldn't tell them anything about you, the key point here is that anonymity isn't just about hiding from your destination.

Facebook, hidden services, and https certs. The screening process begins with... - The Pirate Network. SSL - POODLE attacks on SSLv3 vulnerability. No, you do not need to change passwords in response to the OpenSSL CCS bugs. For the third time this year, there is yet another flaw in an underlying security technology used across the net: the recently fixed OpenSSL bugs announced on June 5. 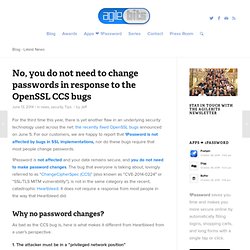 For our customers, we are happy to report that 1Password is not affected by bugs in SSL implementations, nor do these bugs require that most people change passwords. 1Password is not affected and your data remains secure, and you do not need to make password changes. The bug that everyone is talking about, lovingly referred to as “ChangeCipherSpec (CCS)” (also known as “CVE-2014-0224″ or “SSL/TLS MITM vulnerability”), is not in the same category as the recent, catastrophic Heartbleed. It does not require a response from most people in the way that Heartbleed did. The SSL 3.0 Vulnerability – POODLE Bug (AKA POODLEbleed)

A bug has been found in the Secure Sockets Layer (SSL) 3.0 cryptography protocol (SSLv3) which could be exploited to intercept data that’s supposed to be encrypted between computers and servers. 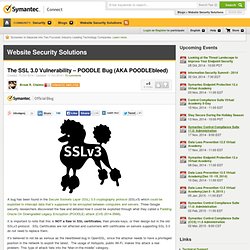 Three Google security researchers discovered the flaw and detailed how it could be exploited through what they called a Padding Oracle On Downgraded Legacy Encryption (POODLE) attack (CVE-2014-3566). It is important to note that this is NOT a flaw in SSL certificates, their private keys, or their design but in the old SSLv3 protocol. SSL Certificates are not affected and customers with certificates on servers supporting SSL 3.0 do not need to replace them. Google’s SHA-1 Deprecation Plan for Chrome.

The latest news in the SSL and web browser industries is Google’s plans to deprecate SHA-1 in a unique way on upcoming releases of Chrome starting with version 39. 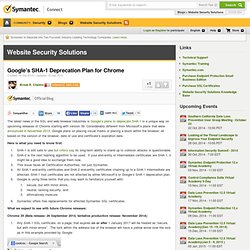 Considerably different from Microsoft’s plans that were announced in November 2013, Google plans on placing visual marks or placing a block within the browser; all based on the version of the browser, date of use and certificate’s expiration date. Here is what you need to know first: SHA-1 is still safe to use but critics say its long-term ability to stand up to collision attacks is questionable.SHA-2 is the next hashing algorithm to be used. If your end-entity or intermediate certificates are SHA-1, it might be a good idea to exchange them now.This issue faces all Certification Authorities, not just Symantec.All SHA-1 end-entity certificates and SHA-2 end-entity certificates chaining up to a SHA-1 intermediate are affected.

What we expect to see with future Chrome releases: Migrating to SHA-2 Certificates - Entrust. Google is being proactive in strengthening the trust chains of the online community. 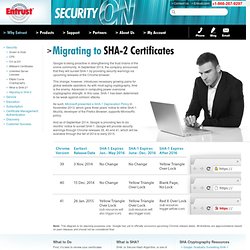 In September 2014, the company announced that they will sunset SHA-1 by providing security warnings via upcoming releases of the Chrome browser. This change, however, introduces necessary growing pains for global website operators. As with most aging cryptography, time is the enemy.