Chai Yan Leung to critics: ‘Most of you here are probably unemployed’ A Facebook account linked to Chai Yan Leung, the daughter of Hong Kong’s leader, CY Leung, disappeared during the past 24 hours after a post about her “beautiful shoes and dresses and clutches” angered protesters who are calling for her father’s ouster. 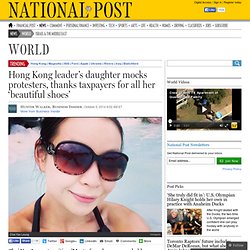 However, the Facebook page wasn’t the only social media account linked to Leung that documented her high-fashion shopping sprees. An Instagram account in Leung’s name remains online and features pictures of her custom-made bags, designer shoes, and trips around the world. On Tuesday, Leung’s Facebook page made news again after she wrote a note that was apparently a response to negative comments about a necklace that appeared in her profile photo. “This is actually a beautiful necklace bought at Lane Crawford (yes- funded by all you HK taxpayers!!

So are all my beautiful shoes and dresses and clutches!! The note also included shots at Leung’s critics for their intelligence and ability to speak English.

Four Signs Billionaire Tom Perkins Has Lost Touch With Reality (and Why It Matters) Tom Perkins. 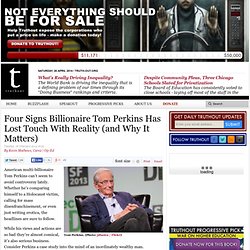 (Photo: jdlasica / Flickr)American multi-billionaire Tom Perkins can’t seem to avoid controversy lately. Whether he’s comparing himself to a Holocaust victim, calling for mass disenfranchisement, or even just writing erotica, the headlines are sure to follow. While his views and actions are so bad they’re almost comical, it’s also serious business. Consider Perkins a case study into the mind of an inordinately wealthy man. Examining his out-of-touch perspective makes it clear how much money can warp a mind and disassociate him from how the rest of the world lives. 1. Hey, you know what’s wrong with American democracy? There’s nothing like calling for the disenfranchisement of nearly half the country to show genuine concern for equity and the political system. 2.

It’s time to add Perkins to the growing list of rich jerks who throw a fit when you don’t love them enough. 3. 4. The arrogance really shines through there, huh? The time for a 99% revolution is here. While the views and actions of. Four Signs Billionaire Tom Perkins Has Lost Touch With Reality (and Why It Matters) Psychology. The Pathology of the Rich - Chris Hedges on Reality Asserts Itself pt1. Income & Wealth Inequality. Tom Perkins Is Willing to Say What the Rest of the Ultrarich Are Secretly Thinking. Tom Perkins incensed the Internet (again), when he suggested Thursday that only taxpayers should get the right to vote and that the wealthiest Americans who pay the most in taxes should get more votes. 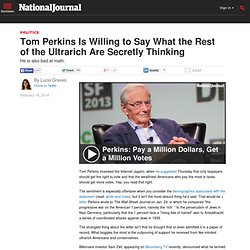 Yep, you read that right. The sentiment is especially offensive when you consider the demographics associated with the statement (read: white and male), but it isn't the most absurd thing he's said. That would be a letter Perkins wrote to The Wall Street Journal on Jan. 24, in which he compared "the progressive war on the American 1 percent, namely the 'rich' " to the persecution of Jews in Nazi Germany, particularly that the 1 percent face a "rising tide of hatred" akin to Kristallnacht, a series of coordinated attacks against Jews in 1938. The strangest thing about the letter isn't that he thought that or even admitted it in a paper of record.

What boggles the mind is the outpouring of support he received from like-minded ultrarich Americans and conservatives. Tom James Perkins. Oh poor me, says tbe wealthy. Opinion: The rich are so clueless. Jennifer Erickson: The rich like Tom Perkins and Bud Konheim live in a bubble Erickson: Konheim's idea that the poor in America are actually wealthy is ludicrous She says median incomes in American are lower now than they were in 2000Erickson: Without a vibrant middle class, America will fall behind in economic growth Editor's note: Jennifer Erickson is the director of Competitiveness and Economic Growth at the Center for American Progress, an organization dedicated to improving the lives of Americans through progressive ideas and action. 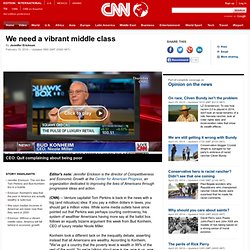 (CNN) -- Venture capitalist Tom Perkins is back in the news with a big (and ridiculous) idea: If you pay a million dollars in taxes, you should get a million votes. While some media outlets have since pointed out that Perkins was perhaps courting controversy, his system of wealthier Americans having more say at the ballot box follows an equally bizarre argument this week from Bud Konheim, CEO of luxury retailer Nicole Miller. Jennifer Erickson Seriously?