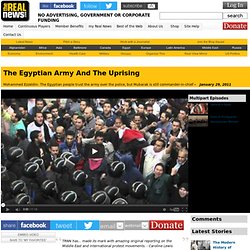 Transcript PAUL JAY, SENIOR EDITOR, TRNN: Welcome to The Real News Network. I'm Paul Jay in Washington. End of Transcript DISCLAIMER: Please note that transcripts for The Real News Network are typed from a recording of the program. Comments Our automatic spam filter blocks comments with multiple links and multiple users using the same IP address. Roots of the Egyptian Revolutionary Moment. Ezzeldin: Egyptian uprising is the product of years of workers' strikes and student protests - now inspired by the Tunisian people - Bio Mohammed Ezzeldin is a graduate of political science from Cairo University, and is doing his Masters' Degree in History at Georgetown University. 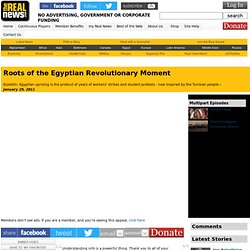 Transcript PAUL JAY, SENIOR EDITOR, TRNN: Welcome to The Real News Network. I'm Paul Jay in Washington. End of Transcript. Internet architecture: The Difference Engine: No more addresses. REMEMBER the panic over the “millennium bug”, when computers everywhere were expected to go haywire on January 1st 2000, thanks to the way a lot of old software used just two digits to represent the year instead of four? 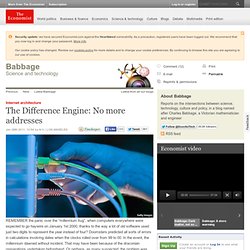 Doomsters predicted all sorts of errors in calculations involving dates when the clocks rolled over from 99 to 00. In the event, the millennium dawned without incident. That may have been because of the draconian preparations undertaken beforehand. Or perhaps, as many suspected, the problem was grossly exaggerated in the first place. Certainly, the computer industry made a packet out of all the panic-buying of new hardware and software in the months leading up to the new millennium. Well, something similar is about to happen in the months ahead. The Internet Assigned Numbers Authority (IANA) will then have doled out all its so-called "slash-eight" blocks of addresses to the five regional internet registries around the world. That is not the case elsewhere. The Sigalon Daily. 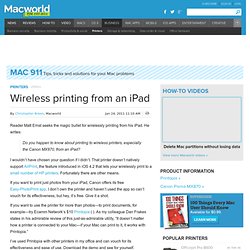 He writes: Do you happen to know about printing to wireless printers, especially the Canon MX870, from an iPad? I wouldn’t have chosen your question if I didn’t. That printer doesn’t natively support AirPrint, the feature introduced in iOS 4.2 that lets your wirelessly print to a small number of HP printers.

Fortunately there are other means. If you want to print just photos from your iPad, Canon offers its free Easy-PhotoPrint app. If you want to use the printer for more than photos—to print documents, for example—try Ecamm Network’s $10 Printopia ( ). I’ve used Printopia with other printers in my office and can vouch for its effectiveness and ease of use. Google previews tablet-optimized Android 3.0. Network World - Google Wednesday released a preview of the software development kit for Android 3.0, which has been designed specifically for mobile devices with larger screens, particularly tablets. 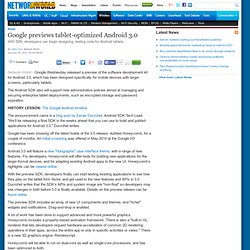 The Android SDK also will support new administrative policies aimed at managing and securing enterprise tablet deployments, such as encrypted storage and password expiration. HISTORY LESSON: The Google Android timeline The announcement came in a blog post by Xavier Ducrohet, Android SDK Tech Lead. "We’ll be releasing a final SDK in the weeks ahead that you can use to build and publish applications for Android 3.0," Ducrohet writes. Google has been showing off the latest builds of the 3.0 release, dubbed Honeycomb, for a couple of months. Android 3.0 will feature a new "holographic" user interface theme, with a range of new features. The preview SDK includes an array of new UI components and themes, and "richer" widgets and notifications.