English Pool of Exercises on Tenses 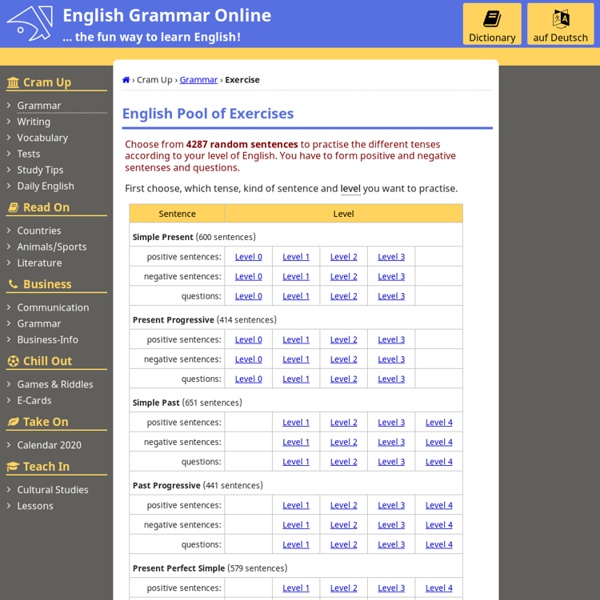 5 Great Infographics for Language Teachers and Learners Infographics are great learning materials. The colourful graphics, clear text and their size make them ideal for classroom integration. I have been posting some of the ones I deem educationl to help teachers leverage this resource to create engaging, relevant and personalized learning experiences in their classes. In this regard, I am introducing you today to a series made up of four parts all containing the best infograpgics about English language teaching and learning. Due to their size we could not embed all the infographics in one post instead we distributed them on four posts with each one of them containing links to other posts to make it easy for you to navigate the four posts without having to move away.

English Grammar Tenses: Stories, Exercises and Answers Welcome to the English Grammar Tenses – The Ultimate Resource! One of the easiest ways to teach and learn grammar is through stories. Click Here for Step-by-Step Rules, Stories and Exercises to Practice All English Tenses So we at Really Learn English made this huge collection of stories and exercises available for you, completely free of charge. You can read the stories online, download the story PDF files, print and use them by yourself or with your students, and check the answers using the answer key. All we ask in return, is that if you find this resource useful, please link to it and share it with your students, colleagues, and anyone else who may benefit from it.

Use six different tenses in English Students often learn just one piece of grammar in a lesson. Most of them master that day’s subject and move on to the next. But, when the time for revision comes, they often don’t remember what they’ve learnt. For example, two weeks ago my class encountered an exercise in which several tenses were revised. First, they demanded that I re-explain the grammar and then they seemed really confused about what form they should use. ADVERT: Native American Indian Tribes: Federally Recognized Tribes This page not only lists all the federally recognized tribes of Native Americans, but also has links from those tribes for their official websites, stories and legends, books, photographs and artwork. This is a work very much in progress and will take a long while to complete [unless you all help with this resource]. Right now I have links to over 150 website locations from about 26 different tribes on this page. I will try to add comprehensive links to an additional one or two tribes each month (moon).

Film Links Until quite recently it was difficult to find pedagogically sound film material to help students improve their language through watching film, and teachers had to spend many hours creating their own materials. However, with the advent of the Internet there are now a wealth of online resources for both language teachers and their students. With so many resources it’s sometimes difficult for teachers to see the wood for the trees. Here I’m going to recommend the sites and resources that from my own experience I have found most useful and engaging.

The dubious origins of tapas – Mooching around Spain We’ve all read about the origin of tapas. You know, ‘tapa’ means lid, and someone at some point in the past – often referred to as ‘medieval times’ – put a bit of bread, or a bit of ham, or a Jacob’s cream cracker or something on top of a glass of wine, or sherry, or beer to keep the flies off, or the dirt out, or something like that. The story often involves Alfonso X the Wise, who was King of Castile in the 13th century – although I have also seen his role attributed to Alfonso XII (late 19th century) and Alfonso XIII (20th century), and to Fernando VII (early 19th century). Anyway, let’s stick with Alfonso X for now. Version one goes that he was recovering from some sort of illness, and wasn’t supposed to drink alcohol, but he wasn’t having any of that. So his doctor told him to at least eat something with every drink.

teaching verb tenses with timelines Timelines for teaching verb tenses are great. Seriously. I’ve been telling teachers to use timelines for as long as I can remember, but, strangely enough, they’ve often played a lesser role in my own classroom practice. I believe this has a lot to do with my baffling inability to make sense of anything that bears the slightest resemblance to a map or a diagram. United Kingdom HISTORY The first Britons (people who live in the United Kingdom) were the Picts, who arrived about 10,000 years ago. In the eighth century B.C., the Celts arrived from Europe and pushed the Picts north into Scotland. In A.D. 43, the Romans invaded and ruled for nearly 400 years. Cacao varieties explained This page will be used as a gathering point for information about cacao varieties that are mentioned elsewhere on my blog. There are many hundreds of recognised cacao varieties, nominal groupings, and clones, so I have no expectation that the information on this page will ever be complete. Cacao naming conventions: the Hopelessly Vague, the Informative, and the Unique Some nominal groupings of cacao are so vague as to be nearly meaningless, such as the problematically imprecise Porcelana, and the stubbornly entrenched triumvirate: Criollo, Trinitario, and Forastero. By contrast, some of the most informative, genetic-based groupings or “clusters” are named after the place in South America where that genetic material (in the form of seeds and/or cuttings) was first collected – such as Curaray, Nanay, and Marañon. Then there are the cacao clones, which have been tracked, studied, and, in many cases, bred by agronomists over several decades.

The Evolution of Ivanpah Solar - ZoneZero: photographic convergence We are at a critical juncture in the evolution of our species. How we choose to live on Earth in the next few decades, with a rapidly growing human population and expanding consumption patterns, may determine not only our prospects for survival, but also the ultimate viability of Earth’s ecosystem. I have long been intrigued by the tension and visual energy created at the nexus of nature and human activity. Uniquely as a species, we modify and use the environment for our perceived needs or enjoyment.