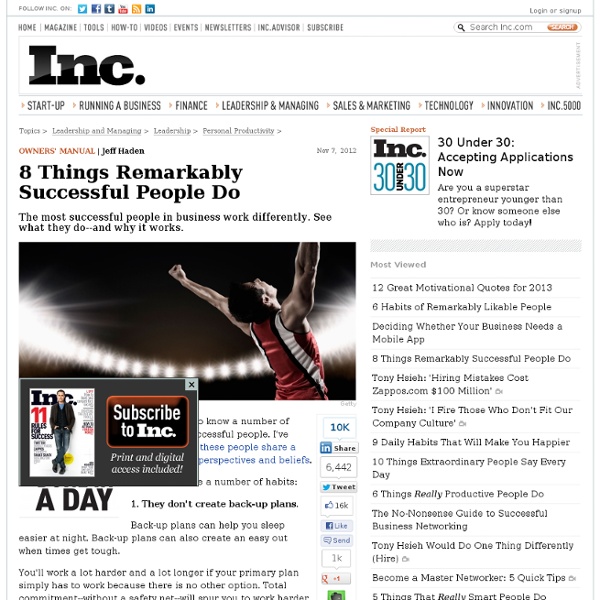 I'm fortunate to know a number of remarkably successful people. I've described how these people share a set of specific perspectives and beliefs. They also share a number of habits: 1. They don't create back-up plans. Back-up plans can help you sleep easier at night. You'll work a lot harder and a lot longer if your primary plan simply has to work because there is no other option. If somehow the worst does happen (and the "worst" is never as bad as you think) trust that you will find a way to rebound. 2. You can be good with a little effort. But you can't be great--at anything--unless you put in an incredible amount of focused effort. Scratch the surface of any person with rare skills and you'll find a person who has put thousands of hours of effort into developing those skills. There are no shortcuts. So start doing the work now. 3. ...and they work a lot more. Forget the Sheryl Sandberg "I leave every day at 5:30" stories. Better yet, they want to put in lots of time. 4. 5. 7. 8. To fail.

Redesigning Google: how Larry Page engineered a beautiful revolution By Dieter Bohn and Ellis Hamburger Something strange and remarkable started happening at Google immediately after Larry Page took full control as CEO in 2011: it started designing good-looking apps. Great design is not something anybody has traditionally expected from Google. More recently, however, it’s been impossible to ignore a series of thoughtfully designed apps — especially on iOS, a platform that doesn’t belong to Google. We went to Google looking for the person responsible for the new design direction, but the strange answer we got is that such a person doesn’t exist. They’re talking to each other. Sticky TOC engaged! Project Kennedy Project Kennedy lifts off The Bravest Man in the Universe, a Mobile Chrome Experiment featuring the music of Bobby Womack, created by B-Reel. When Page took office, his first directive was clear. The vision would turn out to focus on on refinement, white space, cleanliness, elasticity, usefulness, and most of all simplicity. Committee by design

Leadership Secret Three: Two Skills Great Leaders Master Build Your Company’s Battlefield Manual Great Ideas! Peter Drucker's "The Five Most Important Questions Yo... Forrester’s top 15 emerging technologies How can big data and smart analytics tools ignite growth for your company? Find out at DataBeat, May 19-20 in San Francisco, from top data scientists, analysts, investors, and entrepreneurs. Register now and save $200! Research firm Forrester understands that everyone who’s been listening with even one ear knows that mobile, social, cloud, and data are big freight trains of change that are crashing through old business models and old business practices. But let’s face it: That train is in the station. Also see: Forrester’s top 10 mobile trends for 2013 Analyst Bryan Hopkins gave us a peek into what Forrester thinks is next, and much of it builds on those four horseman of disruptive change. Here they are, in four groups: End user computing technologies Next-generation devices and UIs New sensors and new user interfaces. Sensors and remote computing technologies Smart products Thing that can sense, react, and communicate. Process data management technologies

Why Extraversion May Not Matter Recent research evidence suggests that while extraversion is predictive of many positive social outcomes, it may not be extraversion itself that matters. Instead, it may be possession of social skills or competencies that are better predictors of social outcomes than personality constructs such as extraversion. Let me explain. Extraversion is a core personality trait that is associated with high levels of energy, expressing emotions, and seeking the company of others. Extraverts seek out social situations. Intraverts are more low-key, deliberate, and often seek solitude. However, social skills come into play. In a very recent study, we found, consistent with previous research, that extraversion was related to both the attainment of leadership positions and a self-rated measure of leader effectiveness. This makes sense. Think about some of the extraverted folks in entertainment—the Robin Williams, or Jim Carrey types. Riggio, R.E., & Reichard, R.

The #1 Career Mistake Capable People Make Articles - Leadership (Listed Alphabetically) The 10 Greatest CEOs of All Time What these extraordinary leaders can teach today's troubled executives. And the Walls Came Tumbling Down Leading Beyond the Walls, a book edited and produced by the Peter F. The most productive relationships are partnerships rooted in a freedom of choice vested in both parties to participate only in that which is mutually beneficial and uplifting. Building Companies to Last Inc. In a world of constant change, the fundamentals are more important than ever. Building Your Company's Vision (not available online) Harvard Business Review (with Jerry I. This HBR cover story explains how companies that enjoy enduring success have core values and a core purpose that remain fixed, while their business strategies and practices endlessly adapt to a changing world. Change Is Good—But First, Know What Should Never Change Companies Need Not Hire Outside CEOs to Stimulate Fundamental Change Directorship (with Jerry I. Inc. This article is part of Inc.'

The Disciplined Pursuit of Less - Greg McKeown by Greg McKeown | 10:00 AM August 8, 2012 Why don’t successful people and organizations automatically become very successful? One important explanation is due to what I call “the clarity paradox,” which can be summed up in four predictable phases: Phase 1: When we really have clarity of purpose, it leads to success. Phase 2: When we have success, it leads to more options and opportunities. Phase 3: When we have increased options and opportunities, it leads to diffused efforts. Curiously, and overstating the point in order to make it, success is a catalyst for failure. We can see this in companies that were once darlings of Wall Street, but later collapsed. Here’s a more personal example: For years, Enric Sala was a professor at the prestigious Scripps Institution of Oceanography in La Jolla, California. What can we do to avoid the clarity paradox and continue our upward momentum? First, use more extreme criteria. Second, ask “What is essential?” Conducting a life audit.