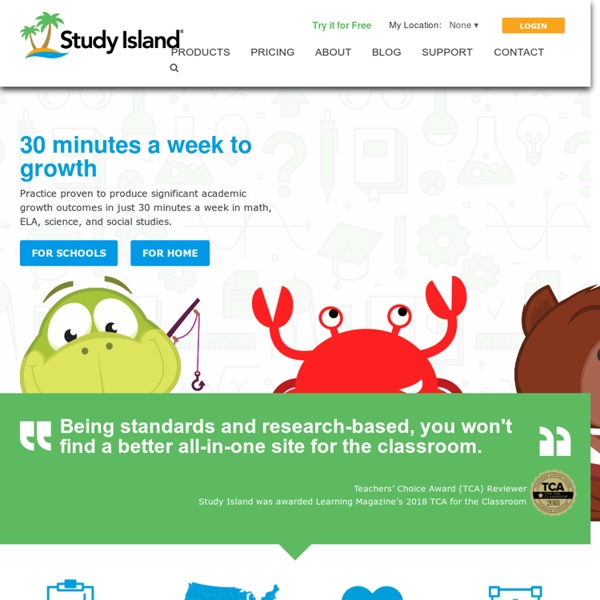 Study Island is a leading provider of affordable, easy-to-use, web-based standards mastery products all of our programs are built from state standards Web-based instruction, practice, assessment and reporting built from YOUR state‘s standards Rigorous academic content that is both fun and engaging Research-based with proven results for all students

Reading Intervention Program - Building Reading Skills in School Neuroscience research has shown that with the right input, the brain can change and reconfigure itself throughout life, proving that student potential is endless. Fast ForWord is an online reading intervention that uses the principles of neuroplasticity – the ability of the brain to rewire and improve – to treat the underlying cause of language and reading difficulties, once and for all. Watch the Fast ForWord Overview Video

All About CTY The Johns Hopkins University Center for Talented Youth identifies and develops the talents of the most advanced K-12 learners worldwide. As part of Johns Hopkins University, CTY helps fulfill the university’s mission of preparing students to make significant future contributions to our world. CTY’s roots extend back to our 1979 founding, and even before, to Johns Hopkins psychologist Julian Stanley’s pioneering work with gifted middle school prodigies. His work put the spotlight on exceptionally bright young people and their capacity and enthusiasm for academic challenges matched to their advanced abilities. Days From Now Calculator - number of days from today Days From Now Calculator - number of days from today This site provides an online "Days From Today" calculator to help you find the date that occurs exactly X days from now. You can also enter a negative number to find out when X days before today happened to fall. You can use this tool to figure out a deadline if you have a certain number of days remaining.

Moving with Math The Inca Trail and Machu Picchu The real Inca Trail is a walking route that leads through the mountains above the Urubamba river, following (at least partly) the course of an old Inca roadway leading to the city of Machu Picchu. The virtual Inca Trail has the following advantages: it doesn't take several days to complete (unless you have a very slow modem)there are no fliesyou don't have to start by climbing 2000 metresit's suitable even for people who suffer from altitude sickness or vertigoyou don't need to carry your own foodno one has ever got amoebic dysentery on the virtual Inca Trail (yet) On the other hand, my photographs are no substitute for the real thing. Click to begin the virtual Inca Trail.

Becky-David Elementary MIND Research Institute - Home The Old Schoolhouse Magazine - Homeschool Product Reviews - Latin Road to English Grammar, The The Latin Road to English Grammar (LREG) is a systematic, well organized, thorough, and easy-to-implement program that will take you and your student from the Latin alphabet to the Latin Vulgate in (plus or minus) three school years. Upon completion of the third level, students should be able to work through any Latin work. A very complete scope and sequence of each level is available at www.thelatinroad.com. Developed by a former Writing Road to Reading instructor, LREG is more than just an in-depth study of Latin. Through the process of compiling an extensive Latin notebook, you and your student will develop a deeper understanding of English grammar, both its similarities to and differences from Latin.

Math Practice and Math Help with MathScore Articles of Confederation (1777) After considerable debate and alteration, the Articles of Confederation were adopted by the Continental Congress on November 15, 1777. This document served as the United States' first constitution, and was in force from March 1, 1781, until 1789 when the present day Constitution went into effect. On June 11, 1776, the Second Continental Congress appointed three committees in response to the Lee Resolution. One of these committees, created to determine the form of a confederation of the colonies, was composed of one representative from each colony with John Dickinson, a delegate from Delaware, as the principal writer.

THE WEST - Sam Houston A sometimes volatile and often contradictory man, Sam Houston played a crucial role in the founding of Texas. Houston was born into a military family in Virginia in 1793. His father, an army major who had served in the Revolutionary War, died when Sam was fourteen. His mother took their family to eastern Tennessee, where Houston spent much of his later childhood in the company of Cherokee Indians, coming to know their language and customs well. His involvement in the War of 1812 launched Houston's political career. He served under Andrew Jackson in the campaign against the Creek Indians, allies of the British.