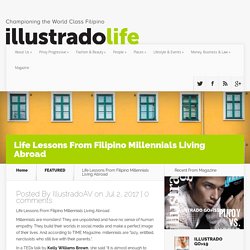 They are unpolished and have no sense of human empathy. They build their worlds in social media and make a perfect image of their lives. And according to TIME Magazine, millennials are “lazy, entitled, narcissists who still live with their parents.”. In a TEDx talk by Kelly Williams Brown, she said “it is almost enough to make people feel that hand ringing trend pieces of the young people are less of a valid cultural or sociological critique and more of an easy trend piece that moves magazine covers.” Screengrab from Kelly Williams Brown’s TED x presentation It is true that when you Google millennials and look for pieces that talk about this generation, the word “entitled” will always come up.

Whatever is “wrong” with this generation — there are also things that are “right”, and certainly insights that we can all learn from. Vanessa Tiu Account Manager – Singapore How long have you been staying there? The Annie B. (Batobalani) Chronicles: All the Single Ladies - Illustrado Magazine - Filipino Abroad. The Annie B. 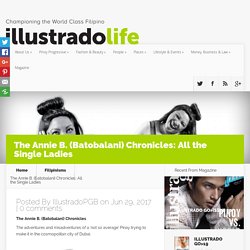 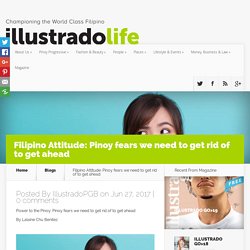 These keep us connected to each other as a community, and have endeared us to other people across the globe. El Camino de Santiago: A Pilgrimage to Santiago de Compostela - Illustrado Magazine - Filipino Abroad. By Al P. 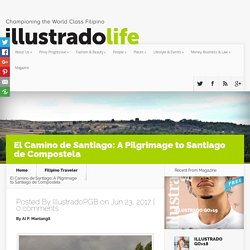 Manlangit Peregrinos walking across the field in Sarria. Finally, after years of procrastinating, I found myself on the way to Santiago de Compostela in Spain, biking the whole 750km. route from Pamplona close to the the French border. With a backpack filled with some clothes, a camera, some Granola bars and a bottle of water, I pedaled away on a bright morning along the highway headed west. Like millions of pilgrims dating back to 800AD, I would be making my way to a place aptly called “The Field of Stars” where, legend has it, St. The beautiful cathedral of Leon. Things You Didn’t Know About Riyadh - Illustrado Magazine - Filipino Abroad. By The Pink Tarha – Janelle Vales-Yasay and Reina Tejano-Beriña Closed doors tend to exude an air of mystery to those standing before it. 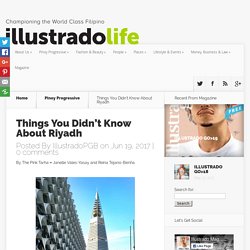 For us who live behind it, the story is not always what you expect it to be. Saudi Arabia is a unique country and not everyone gets a chance to see it for what it really is from the inside. The Annie B. Chronicles: "Krisis the Moment" - Illustrado Magazine - Filipino Abroad. The Annie B. 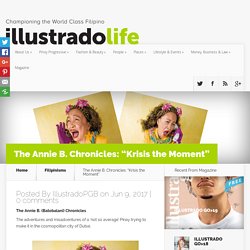 Artist Spotlight: Victorino Bautista - Illustrado Magazine - Filipino Abroad. Visual Artist My Art I was born and raised in Philippines and finished an architecture degree at the University of the Philippines in Diliman. 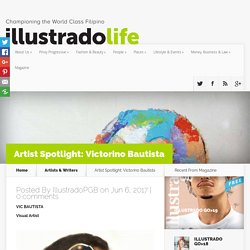 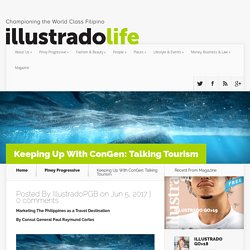 And I silently wonder back:” Yes, a secret we’ve long been whispering to the whole world for so long.” I looked away, pondering on the loud musings of a “concerned” Philippines fan, the ails of our tourism industry reasserting itself on my consciousness at the heels of Dubai’s famed Annual Investment Meeting and the Arabian Travel Market. It’s always more fun and it does seem that we’re having fun watching our ASEAN neighbors’ tourism statistics skyrocket way past ours. Angas Pinas: Nikki Muller - Illustrado Magazine - Filipino Abroad. Nikki Muller: When opportunity knocks twice Excel V. 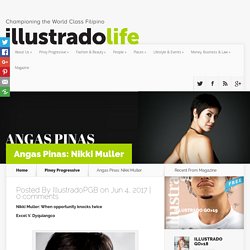 Dyquiangco Nikki Muller – Credit Frank Foo Photography Nikki Muller would never have thought of television as an option if not for a serendipitous encounter outside her high school gates in the year 2000. Illustrado Eats: JW Marriott Kabayan Night - Illustrado Magazine - Filipino Abroad. A review of Kabayan Night at the Market Place, JW Marriott Dubai by Team Illustrado Filipinos are among the world’s heartiest eaters. 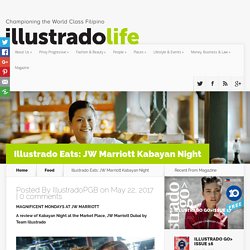 Our notion of celebration always involve some kind of bacchanalian feast, with the table overflowing with all kinds of viands, meats being grilled over charcoal, and an endless array of condiments, side dishes, and desserts. To us, a great meal always mean overabundance — which is why the new Kabayan Night in JW Marriott in Deira, Dubai is our kind of gastronomic fiesta. Perfectly ensconced in an area with a high concentration of Filipinos, JW Marriott stands proudly as one of Dubai’s most seasoned and trusted hotels.

Ask anyone who has been in the UAE for over a decade, and they’ll tell you that as far as F&B and hospitality goes, JW Marriott is like a trusty friend – it is reliable and consistent, and has managed to stay as such through the years. The concept is hardly revolutionary. Mabuhay ka, JW Marriott! Budget Travel UAE: Where can AED3,000 or less take you? - Illustrado Magazine - Filipino Abroad. Budget Travel UAE: Where can AED3,000 or less take you? Story and Photos by Gelo Santos If you’re a resident of the UAE and you have an extra AED3,000 to spend and four days and three nights for traveling, where would you go abroad to relax, learn different cultures, taste various cuisines, meet new friends, take selfies worthy of Facebook and Instagram and, of course, create priceless memories?

Here’s a rundown of budget-friendly countries, what to expect in each destination, as well as travel cost estimates based on actual experiences (daily expenses are computed with two full meals with drinks per day, assuming that breakfast is free at the accommodation). SNOWREADY: 6 Things Filipinos Need to Learn to Survive In the Cold. From the tropical islands of the Philippines to the Frigid Zone countries of the Arctic Circle – mabrrrhay! One of the most dreaded things about migrating to another country is the prospect of having to adapt to extreme cold weather. And nowhere is that more pronounced than in the case of the tank top and flip-flop wearing, Boracay state-of-mind loving Filipinos. Still, neither below zero temperatures nor frostbite will scare the determined Pinoy expat.

His tour of duty took him to countries that were predominantly Islamic – UAE, Jordan, Malaysia. To Ambassador Villa, President Benigno Aquino III’s mandate is clear as day: advance the national interest of the Philippines, and reinforce the country’s bilateral relations with Kuwait. Most Influential Filipinos in the Gulf: Ambassador Grace Relucio-Princesa.

Most Influential Filipinos in the Gulf: Ambassador Grace Relucio-Princesa Amb. Grace Relucio-Princesa – Photo by Eros Goze for Illustrado Magazine She would refer to herself as the ‘Nanay’ of the Filipino community in the UAE, most importantly a servant leader – an Ambassador for God and country. She would coax audiences to sing-a-long with her ‘Ako Ay Pilipino’ and ‘Sino Ako’ every chance she would get at community gatherings. Filipino Traveler: Cleo Eleazar in Berlin - Illustrado Magazine : Illustrado Magazine. Berlin is known for a lot of things, but the most popular sights are the Berlin Wall and the Brandenburg Gate. Both are known for their historical significance. I can understand the sentiment behind these structures, especially after standing next to them and listening to the stories behind them.

Sights of Berlin I had the privilege of travelling with a friend and colleague who is originally from Berlin, and I had a personal tour courtesy of her father who is not only knowledgeable about the city’s history, but have personally experienced some of the events that shaped the city, including the construction and the subsequent fall of the Berlin Wall. We all know the story of the Berlin Wall. Brandenburg Gate is probably the most famous symbol of the division of the city. GLOBETROTTER's NOTES: AMSTERDAM. By Kristine Abante What is the city known for? Filipinos in Dubai: It's What I Do. IRIS ABARABARAlterations Engineer – Emaar PropertiesDubai, UAE What do you do for a living? I am an architect, and I work in the customer care alterations department in a large real estate developer here in the UAE. My Pinoy Life in Xiamen, China. Fujian, Xiamen, China. Top 10 Excuses That Should Not Hold You Back From Traveling. As someone who leads a life of travel, I get a lot of messages from people who also want to live a life of exciting trips, colorful destinations, and breath-taking adventures.

But not everyone seems to be really up for it—I get the occasional “I wish I can travel and work remotely like you, but I can’t,” followed by a laundry list of reasons that they consider valid reasons to keep them from living their dreams. These reasons are, for me, just excuses. If you really want to travel, then you can make it happen. I’m not rich either, yet here I am, able to live my dream. I did not come from money, nor am I earning tons of cash from my job.

I work hard, and save harder. First, track your spending habits. Second, try to live as cheaply as possible while you are still saving up, and find ways to save money in any chance you can get. Third, watch out for cheaper alternatives. Once you start doing these small steps, saving up for your travel fund will become easier and easier. Don’t be. Comments. Filipino Schools Around The World. Meet Angeli Agbayani: Actress and Artist. Filipino in Canada: My Pinoy Life in Edmonton. Edmonton has been our home since August 2013. The move has been planned taking into consideration, free and good quality education for our children, a stable economy, great employment opportunities and permanent residency with a chance to be a citizen of Canada. We chose to live and settle in Edmonton, Alberta first, because we have a family here and second, because the city has so much to offer. Family of Artisans: Art In Our Blood. Survival Hacks for Every Overseas Filipino Workers. Filipino Diaspora: Surviving Abroad.