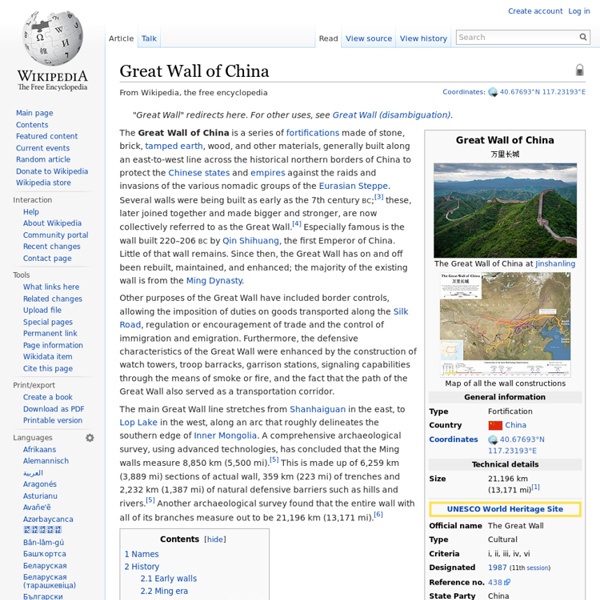 The Great Wall of China is a series of fortifications made of stone, brick, tamped earth, wood, and other materials, generally built along an east-to-west line across the historical northern borders of China to protect the Chinese states and empires against the raids and invasions of the various nomadic groups of the Eurasian Steppe. Several walls were being built as early as the 7th century BC;[3] these, later joined together and made bigger and stronger, are now collectively referred to as the Great Wall.[4] Especially famous is the wall built 220–206 BC by Qin Shihuang, the first Emperor of China. Little of that wall remains. Since then, the Great Wall has on and off been rebuilt, maintained, and enhanced; the majority of the existing wall is from the Ming Dynasty. The main Great Wall line stretches from Shanhaiguan in the east, to Lop Lake in the west, along an arc that roughly delineates the southern edge of Inner Mongolia. Names History Early walls The Great Wall of the Qin Ming era

Petra Petra (Arabic: البتراء, Al-Batrāʾ, Ancient Greek Πέτρα) is a historical and archaeological city in the southern Jordanian governorate of Ma'an that is famous for its rock-cut architecture and water conduit system. Another name for Petra is the Rose City due to the color of the stone out of which it is carved. The site remained unknown to the Western world until 1812, when it was introduced by Swiss explorer Johann Ludwig Burckhardt. It was described as "a rose-red city half as old as time" in a Newdigate Prize-winning poem by John William Burgon. UNESCO has described it as "one of the most precious cultural properties of man's cultural heritage".[4] See: UNESCO Intangible Cultural Heritage Lists. Geography[edit] Pliny the Elder and other writers identify Petra as the capital of the Nabataeans and the center of their caravan trade. Map of Petra The narrow passage (Siq) that leads to Petra History[edit] One out of multiple dwellings in Petra Jordan General view of Petra Urn Tomb Roman rule[edit]

Christ the Redeemer (statue) Aerial view of the statue The idea of building a large statue atop Corcovado was first suggested in the mid-1850s, when Catholic priest Pedro Maria Boss requested financing from Princess Isabel to build a large religious monument. Princess Isabel did not think much of the idea and it was dismissed in 1889, when Brazil became a republic with laws mandating the separation of church and state.[6] The second proposal for a landmark statue on the mountain was made in 1920 by the Catholic Circle of Rio.[7] The group organized an event called Semana do Monumento ("Monument Week") to attract donations and collect signatures to support the building of the statue. The donations came mostly from Brazilian Catholics.[3] The designs considered for the "Statue of the Christ" included a representation of the Christian cross, a statue of Jesus with a globe in his hands, and a pedestal symbolizing the world.[8] The statue of Christ the Redeemer with open arms, a symbol of peace, was chosen.

Machu Picchu Machu Picchu (in hispanicized spelling, Spanish pronunciation: [ˈmatʃu ˈpiktʃu]) or Machu Pikchu (Quechua machu old, old person, pikchu peak; mountain or prominence with a broad base which ends in sharp peaks,[1] "old peak", pronunciation [ˈmɑtʃu ˈpixtʃu]) is a 15th-century Inca site located 2,430 metres (7,970 ft) above sea level.[2][3] It is located in the Cusco Region, Urubamba Province, Machupicchu District in Peru.[4] It is situated on a mountain ridge above the Sacred Valley which is 80 kilometres (50 mi) northwest of Cusco and through which the Urubamba River flows. Most archaeologists believe that Machu Picchu was built as an estate for the Inca emperor Pachacuti (1438–1472). Often mistakenly referred to as the "Lost City of the Incas", it is perhaps the most familiar icon of Inca civilization. The Incas built the estate around 1450, but abandoned it a century later at the time of the Spanish Conquest. Machu Picchu is vulnerable to threats. History Early encounters Geography

Chichen Itza Chichen Itza (/tʃiːˈtʃɛn iːˈtsɑː/,[1] Spanish: Chichén Itzá [tʃiˈtʃen iˈtsa], from Yucatec Maya: Chi'ch'èen Ìitsha' [tɕʰɨɪʼtɕʼeːn˧˩ iː˧˩tsʰaʲ];[2] "at the mouth of the well of the Itza") was a large pre-Columbian city built by the Maya people of the Post Classic. The archaeological site is located in the municipality of Tinum, in the Mexican state of Yucatán.[3] Chichen Itza was a major focal point in the northern Maya lowlands from the Late Classic (c. AD 600–900) through the Terminal Classic (c.AD 800–900) and into the early portion of the Early Postclassic period (c. Chichen Itza was one of the largest Maya cities and it was likely to have been one of the mythical great cities, or Tollans, referred to in later Mesoamerican literature.[4] The city may have had the most diverse population in the Maya world, a factor that could have contributed to the variety of architectural styles at the site.[5] Name and orthography[edit] Location[edit] Political organization[edit] Economy[edit]

Colosseum The Colosseum or Coliseum, also known as the Flavian Amphitheatre (Latin: Amphitheatrum Flavium; Italian: Anfiteatro Flavio or Colosseo) is an elliptical amphitheatre in the centre of the city of Rome, Italy. Built of concrete and stone,[1] it was the largest amphitheatre of the Roman Empire, and is considered one of the greatest works of Roman architecture and engineering. It is the largest amphitheatre in the world.[2] The Colosseum could hold, it is estimated, between 50,000 and 80,000 spectators,[6][7] and was used for gladiatorial contests and public spectacles such as mock sea battles, animal hunts, executions, re-enactments of famous battles, and dramas based on Classical mythology. Although in the 21st century it stays partially ruined because of damage caused by devastating earthquakes and stone-robbers, the Colosseum is an iconic symbol of Imperial Rome. The Colosseum is also depicted on the Italian version of the five-cent euro coin. Name History Ancient Medieval Modern Exterior

Taj Mahal The Taj Mahal (/ˈtɑːdʒ məˈhɑːl/ often /ˈtɑːʒ/;,[2] from Persian and Arabic,[3][4] "crown of palaces", pronounced [ˈt̪aːdʒ mɛˈɦɛl]; also "the Taj"[5]) is a white marble mausoleum located in Agra, Uttar Pradesh, India. It was built by Mughal emperor Shah Jahan in memory of his third wife, Mumtaz Mahal. The Taj Mahal is widely recognized as "the jewel of Muslim art in India and one of the universally admired masterpieces of the world's heritage".[6] Taj Mahal is regarded by many as the finest example of Mughal architecture, a style that combines elements from Islamic, Persian, Ottoman Turkish and Indian architectural styles.[7][8] In 1983, the Taj Mahal became a UNESCO World Heritage Site. Origin and inspiration Taj Mahal site plan. Should guilty seek asylum here, Like one pardoned, he becomes free from sin. The Taj Mahal incorporates and expands on design traditions of Persian architecture and earlier Mughal architecture. Tomb Northern view, from across the river Yamuna Exterior decoration

Great Pyramid of Giza The Great Pyramid of Giza (also known as the Pyramid of Khufu or the Pyramid of Cheops) is the oldest and largest of the three pyramids in the Giza Necropolis bordering what is now El Giza, Egypt. It is the oldest of the Seven Wonders of the Ancient World, and the only one to remain largely intact. Based on a mark in an interior chamber naming the work gang and a reference to fourth dynasty Egyptian Pharaoh Khufu,[1][2] Egyptologists believe that the pyramid was built as a tomb over a 10 to 20-year period concluding around 2560 BC. There are three known chambers inside the Great Pyramid. Transparent view of Khufu's pyramid from SE. History and description[edit] The pyramid remained the tallest man-made structure in the world for over 3,800 years,[8] unsurpassed until the 160-metre-tall (520 ft) spire of Lincoln Cathedral was completed c. 1300. Materials[edit] Casing stones[edit] Casing stone Construction theories[edit] Clay seal bearing the name of Khufu from the great pyramid.