Why Your Company Needs A Chief Collaboration Officer 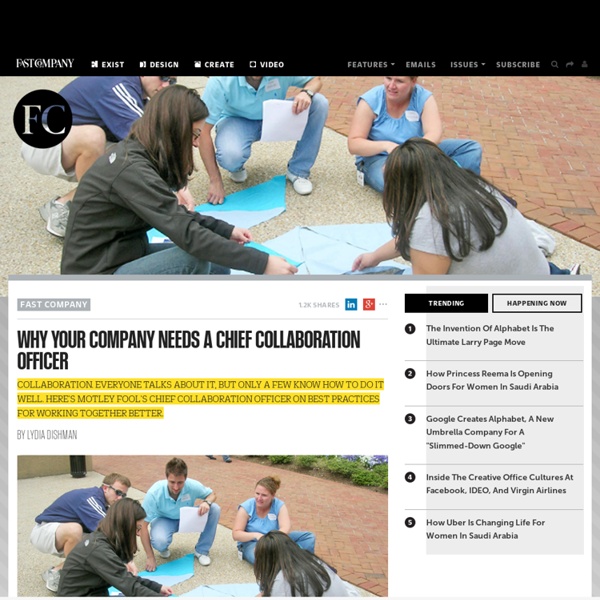 Collaboration. It’s a $1 billion industry, according to an ABI Research study on worker mobility and enterprise social collaboration. And it's projected to grow to $3.5 billion by 2016. No wonder lots of ink has been spilled on this business buzzword on everything from how to start (hint: build trust) to doing it better with social platforms, to using it as a way to achieve that holy grail of business: innovation. Two years ago, the Harvard Business Review even touted the need for another C-suite executive: the CCO. But in an ideal scenario, this most critical of business strategies would have a dedicated individual toiling to make collaboration part of the daily doings of the company. Todd Etter, one of the founders of the multimedia financial-services company that dishes advice on stocks and personal finance, has held the title for the past two years. They even have proof. Understand What Collaboration Is...and What It Isn’t Use Responsibly Brainstorm Effectively Hack the "Hackathon"

Open data can benefit voluntary sector The Nominet Trust team is spending a fair amount of time thinking, investigating and experimenting with open data. The trust's aim is to seek and support new uses of digital technology for social good. We recently co-hosted a conference on charities and open data with the Big Lottery Fund and NCVO, which indicated a growing interest from the voluntary sector. The opening of public sector data over the past few years is one obvious stimulus for this, particularly since many charities are data suppliers due to their work delivering a public service contracts. For many in the voluntary and charitable sector, the starting point for these conversations is the desire to be more effective in addressing social challenges. But this isn't new. What is new though, is the range of digital tools that can help us make sense of the growing amount of data that is around us. Such a critical mass is essential to achieving more strategic aims for the sector's participation in the open data world.

Why Employees' Big Dreams Should Be Your Company's Top Priority As a manager, you can create a tremendous amount of loyalty just by listening to your employees. And loyalty matters--a lot. When Kelley Lindberg became a manager at a software company several years ago, she inherited some employees who were confused about where they were headed. “I asked him what his career goals were, and he surprised me completely,” Lindberg says. Lindberg found the perfect job for him--a job that required plenty of skill and client interaction, but didn’t come with a management path or lots of visibility. Creating a sense that you care about your employees can both motivate and inspire them. Whitney Johnson, author of Dare, Dream, Do: Remarkable Things Happen When You Dare to Dream, believes that people’s dreams matter. The idea of helping your employees chase their dreams may seem unusual, impractical, or even strange to some. Matthew Kelly, author of The Dream Manager has heard these objections and more. So how do you help your employees achieve their goals?

The Long March from Crowdsourcing to a Global Meritocracy OK, this isn't working anymore. Too many people either don't have a job or the ones that do are predominantly dissatisfied. We've been talking about networked organisations and distributed work for decades, but productivity gains have been dim the past ten years. But because neither renovation nor innovation did catch up at the speed of our economic development, we crashed. Bruno is a European-born entrepreneur currently busy building a simple marketplace for professional services, work|i|o. Here's how it could work. Currently the not perfectly labelled crowdsourcing is associated with the negative touch of cheap designer specwork and lowest possible labour costs. The reason we have company structures and processes, and by now organizations that are being deemed not only too big to fail but also too big to run, is that it was the most efficient way since the industrial revolution. So why again is the relationship revolving around permanent affiliation, and not expertise?

Pulling informal learning Take a look at these 8 demand-side knowledge management principles by Nick Milton. People don’t pay attention to knowledge until they actually need it.People value knowledge that they request more highly than knowledge that is unsolicited.People won’t use knowledge, unless they trust its provenance.Knowledge has to be reviewed in the user’s own context before it can be received.One of the biggest barriers to accepting new knowledge is old knowledge.Knowledge has to be adapted before it can be adopted.Knowledge will be more effective the more personal it is.They won’t really know it until they do it. They highlight the difference between Push and Pull learning. How often are training courses aligned with the moment of need? There are many do-it-yourself applications available today that let people take control of their learning. For learning & development departments, a Pull workplace changes the traditional expert-led dynamic of content creation.

Free Infographic: How to Solve Online Registration Challenges How often have you become frustrated filling out online registration forms? There is a better way. Janrain has compiled data on some of the most challenging aspects of online registration forms and simple solutions to improve the user experience…and conversion rates. Click here to download the full infographic [PDF]. Important Stats 86% of people may leave a website when asked to create an account50% of people dislike creating new passwords 60% of people have more than 5 unique passwords to remember 40% of people use the Forgot Password feature at least once a month 88% of online users admit they have lied on form 2 in 5 people would rather solve world peace than create a new password 2 in 5 people would rather scrub a toilet than create a new password 77% of online users prefer social login Facebook is the preferred social login provider of choice Embed Code How to Solve the Online Registration Challenge – An infographic by the team at Janrain

The Global Talent Crisis By Edward Gordon The Futurist, September-October 2009 Contrary to popular opinion, there are plenty of open jobs. What's missing are candidates with skills. We are in the midst of a global job and talent upheaval, the most remarkable of any job and talent change since the Industrial Revolution and encompassing every aspect of the global economy. The dawning of a new industrial age, a period characterized by a growing need for highly skilled technical workers, is driving this revolution. In the United States, the official unemployment rate is projected to top out at near 10.5% by 2010. This is a familiar refrain; we've been hearing alarms about the skills gap for years. Clearing the Decks: What Today's Downturn Means for Tomorrow's Job Market Over the last 10 years, the real U.S. economy did grow. The United States has outsourced advanced technological production, design, and management capacity. In Search of Technical Talent Today's U.S. employment picture is extremely muddled.

It’s Not What You Know, It’s How You Learn Why Your Company Needs A Full-Time, Idea-Killing Chief Dissent Officer Big companies get a bad rap. We think of them as creativity-killing machines that constantly crush the world-changing ideas of their hardworking employees. As if such internal mechanisms don’t also save us from countless bad ideas, creative darlings, and disasters-in-the-making. In fact, in my business experience, it’s nearly too scary to contemplate how many horrible ideas almost make it out the front door. And they would have were it not for some lone dissenter who turned the tide. Last year, anthropologist Grant McCracken proposed the idea of a C-level executive to track trends and monitor the “deep waves of culture in America and the world” in his influential book, Chief Culture Officer. As we enter a high-speed, digital-driven economy, companies are under increased pressure to roll out more and more new things, to do it faster, with tighter development cycles. It turns out successful companies have been doing this for quite some time. As F. [Image: Flickr user Bruce Denis]

How To Find Meaningful Work It’s a phenomenon that has become increasingly apparent over the last five years: For many people, the ideal job has morphed from one that offers lots of money to one that offers meaning--and a competitive salary doesn’t hurt, either. It isn’t just that people are rejecting jobs at large financial institutions with questionable morals (see this New York Times article on Wall Street’s campus recruiting crisis). Jobseekers today want a position that makes them feel good inside. ReWork, a startup that came out of the 2011 Unreasonable Institute, may be the first company that places young professionals directly with "disruptive, world changing organizations"--including non-profits and all manner of triple-bottom-line businesses. Anyone interested in getting a job through ReWork fills out an application on the website. ReWork currently works with 15 to 25 companies (for now, most are in Pittsburgh and Boulder, Colorado, but that will change).

5 Maneuvers The Tech Biz Should Steal From The Fashion Industry Let’s face it. Technology is fashion. We don’t update our operating systems to get tighter Twitter integration, or buy a new phone for the opportunity to display four more icons. We update them because the new one makes our present one look a bit, well, last season. I’ve worked with many of the stars of the technology world and I’ve air-kissed with some of the darlings of the fashion world, too. Fashionistas and technologists deal with a lot of the same stuff: fickle consumers, fast turnaround of products, and diva designers with planet-sized egos. Here are five things I think the geeks can learn from the chic: 1. Some years ago, IBM had a problem. Big Blue reeled from what it heard. CIOs were buying a multimillion-dollar computer for the same reason that kids buy one pair of sneakers instead of another. 2. Fashion designers become famous for a “key piece.” Women walk into Chanel for that little black dress, some No. 5 perfume, a tweed suit, and a 2.55 quilted handbag. 3. 4. 5.

The world at work: Jobs, pay, and skills for 3.5 billion people | McKinsey Global Institute | Labor Markets Over the past three decades, as developing economies industrialized and began to compete in world markets, a global labor market started taking shape. As more than one billion people entered the labor force, a massive movement from “farm to factory” sharply accelerated growth of productivity and per capita GDP in China and other traditionally rural nations, helping to bring hundreds of millions of people out of poverty. To raise productivity, developed economies invested in labor-saving technologies and tapped global sources of low-cost labor. Podcast A skills-scarce world DownloadMcKinsey director Richard Dobbs and MGI senior fellow Anu Madgavkar detail key findings from the report and policy implications for addressing labor market imbalances. Today, the strains on this market are becoming increasingly apparent. The dynamics of the global labor market will make these challenges even more difficult. Slideshow Pop out