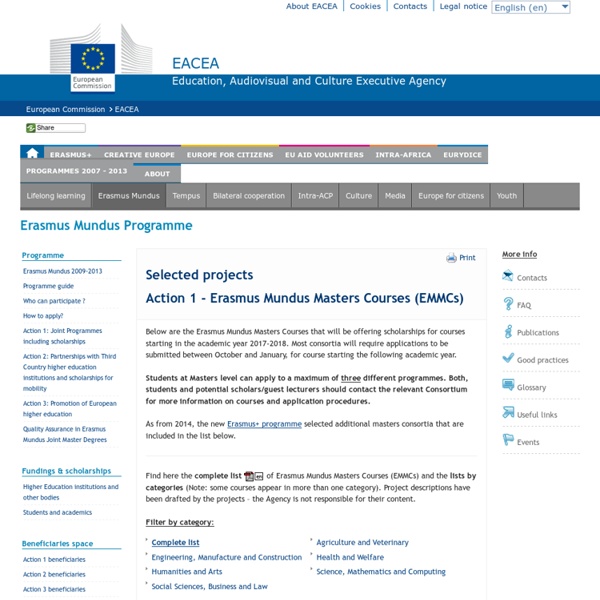 Below are the Erasmus Mundus Masters Courses that will be offering scholarships for courses starting in the academic year 2017-2018. Most consortia will require applications to be submitted between October and January, for course starting the following academic year. Students at Masters level can apply to a maximum of three different programmes. Both, students and potential scholars/guest lecturers should contact the relevant Consortium for more information on courses and application procedures. As from 2014, the new Erasmus+ programme selected additional masters consortia that are included in the list below. Find here the complete list of Erasmus Mundus Masters Courses (EMMCs) and the lists by categories (Note: some courses appear in more than one category). Filter by category: List of all Erasmus Mundus Masters Courses (EMMCs) Agriculture and Veterinary Engineering, Manufacturing and Construction Science, Mathematics and Computing Social Sciences, Business and Law

Visegrad Summer School Call for applications open until 31 March, 2013 The Visegrad Summer School is educational programme which provides an interdisciplinary learning space for young Czech, Hungarian, Polish and Slovak students, and for their peers from other Central and Eastern European countries. The project aims to deepen knowledge on regional and global challenges, eliminate mutual stereotypes and build ties and friendly relations.The programme of the 12. edition that will be held between 30 June and 13 July 2013 includes lectures, debates and workshops on current political, cultural and social challenges in the regional, global and European perspective. Previous editions of the School were attended by over 500 people from:, Czech Republic, Hungary, Poland, Slovakia, Armenia, Azerbaijan, Belarus, France, Kyrgyzstan, Kosovo, Lithuania, Macedonia, Moldova, Germany, Russia, Romania, Serbia, Slovenia and Ukraine.

IELTS: What to Expect Taking the IELTS exam? The TopUniversities.com guide has everything you need to know in order to prepare. What is the format? The IELTS test is taken with pencil and paper, and takes three hours and 45 minutes to complete. It is divided into four sections: Are you an aspiring journalist? Apply for the Foreign Correspondents' Programme in Finland! - Embassy of Finland, London : News & Current Affairs Would you like to spend the month of August in Finland learning more about the country, its society and the Finnish way of life? If you are a graduate with foothold in journalism or a student of journalism due to graduate soon, you may be eligible to apply for a scholarship to take part in the Foreign Correspondents’ Programme (FCP) in Finland in August 2013. Helsinki has an over 1,000 km-long bicycle path network that is also used intensively by pedestrians. (c) Visit Helsinki The Ministry for Foreign Affairs of Finland now welcomes applications from citizens or residents of the following countries: Argentina, Belarus, Brazil, China, Egypt, France, Germany, India, Japan, Poland, Portugal, Russia, Saudi Arabia, South Africa, Spain, Turkey, Ukraine, United Kingdom, the United States and Vietnam.

Top Universities Need to sit the International English Language Testing System (IELTS) exam to get on a course but don't know a thing about it? Then our guide is for you! What is it? Each year, around 1.2 million candidates sit the International English Language Testing System (IELTS), making it the most widely taken English language proficiency test in the world. It is aimed at people aged 16 and above who do not speak English as their first language, but wish to work or study abroad in an English-speaking country.

International Student Festival in Trondheim 2013 Do you want to be a part of the world’s largest student festival? Apply for participation at ISFiT 2013 for an experience unlike anything you have ever known! ISFiT is short for the “International Student Festival in Trondheim”. .: GLITEMA :. Home The GLITEMA EMMC The GLITEMA (German Literature in the European Middle Ages) EMMC is an integrated Master Course run by a consortium of three full partner universities (Porto, PT [co-ordinator], Bremen, Palermo), supported by a number of associated partner HEIs (Amsterdam, Bamberg, FU Berlin, Cairo, Greifswald, Ljubljana, Mainz, Moscow [Lomonosov], North Carolina, Olomouc, Rio de Janeiro, Salzburg, Santiago de Compostela, Vienna and Zurich). The basic premise for the GLITEMA EMMC is the understanding that Medieval culture, in order to be fully comprehended, must be analysed from within its wider European context: in particular, the traditional “national philological approach”, which has informed Medieval German Studies since their inception during the 19th century, does not allow students to understand the full extent to which today’s national cultures in Europe have their roots in a common – Medieval – past.

IELTS Preparation: Listening and Speaking In my previous post, I talked about IELTS preparation with a focus on the reading section of the exam. In this space, I will try to present some solutions to the challenges that students face in preparing their listening and speaking skills for those sections. You may doubt your own English language abilities, but it is possible to achieve a good IELTS score if you follow certain handy tips, and, needless to say, keep on practicing. Here are some ways to improve your listening and speaking skills as part of your IELTS preparation. Use entertainment to hone your listening skills

International student International undergraduate and postgraduate students starting in 2012 Tuition fees Your tutition fees will depend on what type of course you enrol for. Find out how much your course will cost Event calendar - Think German In Focus: German Language With 100 million native speakers and strong ties to business, science and culture, German is a language well worth learning! Take a look at our special section to find out more.

The IELTS Exam: Advice from a Successful Test-Taker Many international students who do not have English as their first language have to take an IELTS exam (short for International English Language Testing System) before they can apply to study abroad. Based on the course and institution they are choosing, the required IELTS test score varies. Generally speaking, a score band of 6 or above is sufficient for any undergraduate study and a minimum of 6.5 is required for postgraduate courses (however, some courses require as high as 8). I have seen students literally trembling in uncertainty when asked to take an IELTS test. Doubting their abilities for no apparent reason, they believe that passing the IELTS exam is just not possible.