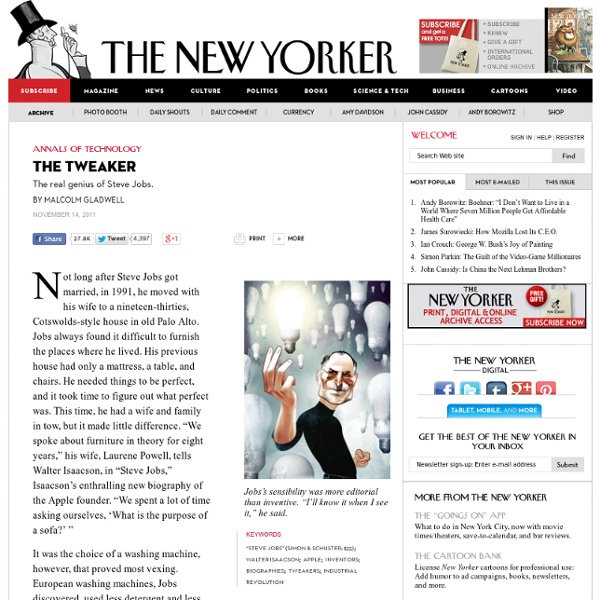 Not long after Steve Jobs got married, in 1991, he moved with his wife to a nineteen-thirties, Cotswolds-style house in old Palo Alto. Jobs always found it difficult to furnish the places where he lived. His previous house had only a mattress, a table, and chairs. He needed things to be perfect, and it took time to figure out what perfect was. This time, he had a wife and family in tow, but it made little difference. “We spoke about furniture in theory for eight years,” his wife, Laurene Powell, tells Walter Isaacson, in “Steve Jobs,” Isaacson’s enthralling new biography of the Apple founder. It was the choice of a washing machine, however, that proved most vexing. Steve Jobs, Isaacson’s biography makes clear, was a complicated and exhausting man. Isaacson begins with Jobs’s humble origins in Silicon Valley, the early triumph at Apple, and the humiliating ouster from the firm he created. Jobs ripped it off and mumbled that he hated the design and refused to wear it.

Nobody Cares This post is dedicated to the late Al Davis. Rest in peace. “Just win baby.”—Al Davis Back in the bad old days when I was running Loudcloud, I thought to myself: how could I have possibly prepared for this? How could I know that half our customers would go out of business? Addressing The Shortage Of Women In Silicon Valley Hide caption Although Silicon Valley faces challenges in recruiting more female employees, woman have played vital roles throughout the history of computing. Augusta Ada Byron King, daughter of the poet Lord Byron, assisted Charles Babbage in the 1840s with his description of the Analytical Engine, the original design for a computing machine. Her notes on the theoretical machine are thought to be an early model for software, over 100 years before it became a reality. Hulton Archive/Getty Images Hide caption Grace Murray Hopper was a Navy rear admiral who in 1946 compiled a 500-page manual for the Harvard Mark I, one of the earliest programmable computers. She developed the first compiler, which allowed programmers to code in their own language instead of rows of 1s and 0s, and later worked on computer languages. Hide caption In October, Virginia Rometty was named IBM's first female CEO in its 100-year history.

An update from the Chairman When I joined Google in 2001 I never imagined—even in my wildest dreams—that we would get as far, as fast as we have today. Search has quite literally changed people’s lives—increasing the collective sum of the world’s knowledge and revolutionizing advertising in the process. And our emerging businesses—display, Android, YouTube and Chrome—are on fire. Of course, like any successful organization we’ve had our fair share of good luck, but the entire team—now over 24,000 Googlers globally—deserves most of the credit. And as our results today show, the outlook is bright. But as Google has grown, managing the business has become more complicated. Iqbal Brainch: The Soul of Apple The news first came in the form of a text from a friend: "Just heard on the news that Steve Jobs died." I dismissed it as another erroneous report. Moments later my iPhone buzzed again with an AP Alert confirming the news. I stood stunned. My mind was blank as tears flooded my eyes.

My Life as a CEO (and VC): Chief Psychologist I’ve had a post in my head for months – maybe longer – about the role of a CEO. It originally appeared on TechCrunch as a guest post but just in case you missed it there. My primary role was “chief psychologist” and as I’ve learned over the past few years the same has been true as a VC. Both are basically people businesses.

Use Your Phone Number to Make Purchase Online Boku Use your mobile phone number instead of your credit card to buy online. Online shopping once required a credit card. Boku makes it possible to make purchases online using a mobile phone number instead. Rather than keying in your credit card number, address and security code, all you need to make a purchase using Boku’s payment option, Paymo , is your phone number. An Open Letter to Carol Bartz, CEO Yahoo Inc. Dear Ms. Bartz, I just finished reading your demoralizing letter regarding recent layoffs at Yahoo over at All Things Digital. W&L Entering Students Continue Trend Toward Apple An annual survey of the entering students at Washington and Lee University has shown that the shift from Windows-based computers to Apple Macintosh has continued to grow. The survey, conducted the W&L Office of Institutional Effectiveness and Information Technology Services, found that 70 percent of the respondents brought Macintosh computers with them as opposed to 30 percent who are using Windows-based machines. That represents a 10 percent increase in the number of first-years with Macintosh computers in the past four years. More than 98 percent of the entering class completed the survey, which identified the types of electronics the students brought to campus with them when they arrived earlier this month. When it came to telephones, all but one of the 471 respondents to the survey brought a cell phone to campus, and the vast majority of those (89 percent) were smartphones. That is up by just less than 13 percent from a year ago.

Why We Prefer Founding CEOs You’re just a rent-a-rapper, your rhymes are minute-maidI’ll be here when it fade to watch you flip like a renegade”—Rakim, Follow The Leader When my partner Marc wrote his post describing our firm, the most controversial component of our investment strategy was our preference for founding CEOs. The conventional wisdom says a startup CEO should make way for a professional CEO once the company has achieved product-market fit. In this post, I describe why we prefer to fund companies whose founder will run the company as its CEO. To ditch dessert, feed the brain If the brain goes hungry, Twinkies look a lot better, a study led by researchers at Yale University and the University of Southern California has found. Brain imaging scans show that when glucose levels drop, an area of the brain known to regulate emotions and impulses loses the ability to dampen desire for high-calorie food, according to the study published online September 19 in The Journal of Clinical Investigation. "Our prefrontal cortex is a sucker for glucose," said Rajita Sinha, the Foundations Fund Professor of Psychiatry, and professor in the Department of Neurobiology and the Yale Child Study Center, one of the senior authors of the research.

TechDay - Read Steve Ballmer's email on Ray Ozzie's resignation October 21 - 9am Sean Mitchell This article could be out of date, as it was published 3 years 6 months 7 days ago. Here’s the un-edited text of the internal email sent out by Microsoft’s Chief Executive Officer Steve Ballmer to employees announcing the transition of Ray Ozzie. From: Steveb Sent: Monday, October 18, 2010 To: Microsoft – All Employees Subject: Ray Ozzie Transition This past March marked a significant milestone for the company when, in a speech at the University of Washington, I sent a message to the world that we’re ‘all in’ when it comes to the cloud. What Will the 'Phone' of 2022 Look Like? - Alexis C. Madrigal A romp through the weird, scary, awesome future of mobile communications. Edited Reuters. The near-term future of phones is fairly well-established. The iPhone 5 was released yesterday and its similarity to every Apple phone since 2007 serves as a reminder that our current mobile devices have been sitting on the same plateau for years.