Why leadership transitions fail. Typical Leader Transition Problems. The 5 Top Challenges of Transitioning To Leadership. Moving into a leadership role is probably the biggest step you will have ever made in your career to date. 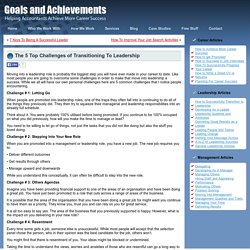 Like most people you are going to overcome some challenges in order to make that move into leadership a success. While we all will have our own personal challenges here are 5 common challenges that I notice people encountering. Challenge # 1: Letting Go When people are promoted into leadership roles, one of the traps they often fall into is continuing to do all of the things they previously did. They then try to squeeze their managerial and leadership responsibilities into an already full schedule. Think about it. You need to be willing to let go of things, not just the tasks that you did not like doing but also the stuff you loved doing. The First 90 Days: Your Road Map For Success at a New Job. Transitioning to a new job is not easy; it can be overwhelming to learn your role, create new relationships, assimilate into the culture, and impress your boss all at once. 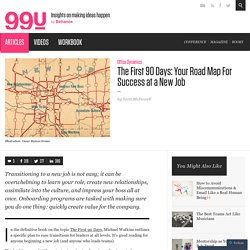 Onboarding programs are tasked with making sure you do one thing: quickly create value for the company. In the definitive book on the topic The First 90 Days, Michael Watkins outlines a specific plan to ease transitions for leaders at all levels. It’s good reading for anyone beginning a new job (and anyone who leads teams). Think of it as your battle against misunderstanding. According to a study conducted by the International Data Corporation: “U.S. and U.K. employees cost businesses an estimated $37 billion every year because they do not fully understand their jobs.” 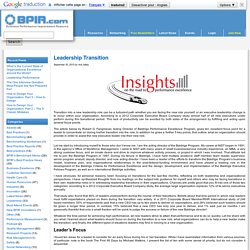 According to a 2012 Corporate Executive Board Company study almost half of all new executives under perform during this transitional period. This lack of productivity can be avoided by both sides of the arrangement by fulfilling and acting upon several focus points. The article below by Robert G. Fangmeyer, Acting Director of Baldrige Performance Excellence Program, gives ten excellent focus point for a leader to concentrate on during his/her transition into the role.

In addition he gives a further 5 key points, that outline what an organization should provide in order to assist the new executive leader into their new role. Let me start by introducing myself to those who don’t know me: I am the acting director of the Baldrige Program. Leader’s Focus 1. This area is almost a prerequisite. 2. 3. 4. 5. 6. 7. 8. 9. NAVIGATING THROUGH LEADERSHIP TRANSITIONS: MAKING IT PAST THE TWISTS AND TURNS. 10 tips on successfully handling the transition from manager to leader. This post is from William Bridges, the author of ten books, including the best-selling Transition, Managing Transition, and The Way of Transition and is an organizational consultant in Mill Valley, California USA. 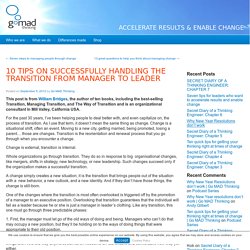 For the past 30 years, I’ve been helping people to deal better with, and even capitalize on, the process of transition. As I use that term, it doesn’t mean the same thing as change. Change is a situational shift, often an event. Stepping Up: Leadership Transitions Plans. To Do Lists. Transition in different areas of effectiveness. Getting Feet Under Desk. Transition Handbook. No place to hide. Ascending to the C-suite. Nearly half of top executives say they weren’t effective at earning support for their new ideas when they moved into C-suite roles—and more than one-third say they have not successfully met their objectives during their tenures. 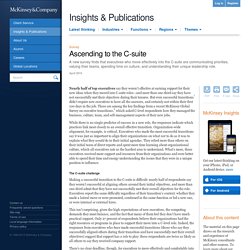 But even successful transitions didn’t require new executives to have all the answers, and certainly not within their first 100 days in the job. These are among the key findings from a recent McKinsey Global Survey on executive transitions, which asked C-level respondents how they managed the business, culture, team, and self-management aspects of their new jobs. While there is no single predictor of success in a new role, the responses indicate which practices link most closely to an overall effective transition. Organization-wide alignment, for example, is critical. Leader Mission Directions. Leader Mission plans. First Time Leader. Tips to Ensure a Smooth Transition into a Leadership Role. You got that promotion you’ve been gunning for — which means that someone was impressed by how you performed in your previous role. 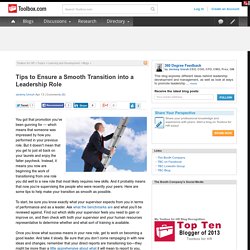 But it doesn't mean that you get to just sit back on your laurels and enjoy the fatter paycheck. Instead, it means you now are beginning the work of transitioning from one role you did well to a new role that most likely requires new skills. And it probably means that now you’re supervising the people who were recently your peers. From Co-Worker to Supervisor. 8 Tips To Transition From Co-Worker To Manager. Managing the Transition to Leadership Roles. Managing a Leadership Transition. Help provided to transitioning leaders. Who has helped most in leadership transitions. How to support your new leaders. Employee Transition accompanies Leader Transition.

Components in new hire coaching. Transition Coaching. Transition coaching is one of the most effective leadership development services that HFL offers, and is increasingly in demand at clients where they have experimented with the HFL process. 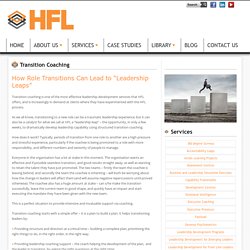 As we all know, transitioning to a new role can be a traumatic leadership experience; but it can also be a catalyst for what we call at HFL a “leadership leap” – the opportunity, in only a few weeks, to dramatically develop leadership capability using structured transition coaching. How does it work? Typically, periods of transition from one role to another are a high pressure and stressful experience, particularly if the coachee is being promoted to a role with more responsibility, and different numbers and seniority of people to manage. Everyone in the organisation has a lot at stake in this moment. The organisation wants an effective and if possible seamless transition, and good results straight away; as well as wanting to retain the talent they have just promoted.