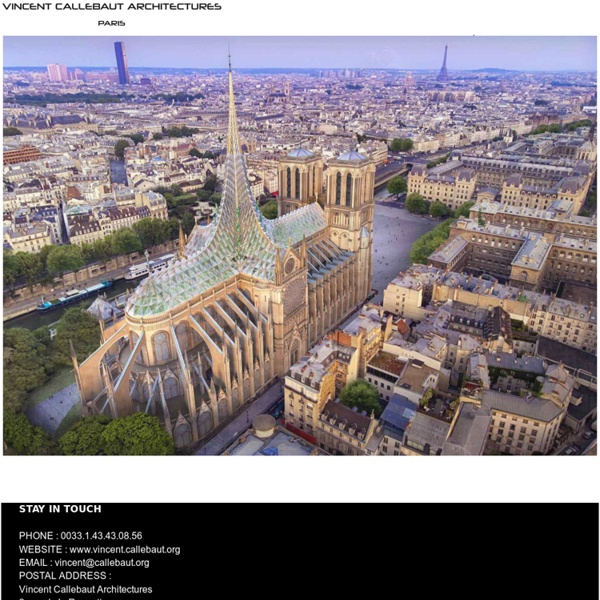 All images, texts and videos avaliable on this website are the property of Vincent Callebaut Architectures. No reproduction of any kind is allowed without the written permission of the owner. All rights reserved. @ Vincent Callebaut Architectures S.A.R.L. To apply for employment, please send by email and/or by post to the Paris office, a letter of motivation, a curriculum vitae and your portfolio. Contact : vincent@callebaut.org

IDEAS CITY 2015: The Collective NYC Biome Map Petri-plates with bacteria modified with fluorescent protein under UV light, show parts of NYC grid map.(Photo credit Marta Molina Gomez and Ali Schachtschneider). Genspace citizen science biotech lab and scientist Christine Marizzi from Cold Spring Harbor Laboratory’s DNA Learning Center worked together to create a map of NYCs collective microbiome, as part of the New Museum’s IDEAS CITY Festival 2015. Painting with bacteria on site at IDEAS CITY. A royal revolution: is Prince Charles's model village having the last laugh? In a room of raw concrete block walls and exposed steel beams, a man with a long hipster beard takes an order on his iPad and froths up a flat white. Young mums and retired couples sit at long communal tables among Wi-Fi workers. It could be a trendy east London cafe in a repurposed industrial space, but this is the centre of Poundbury, the Prince of Wales’s traditionalist model village in Dorset. And there’s not a doily or tweed jacket in sight.

Small Studio Apartment You’ve seen a lot of ingenious ideas on how to decorate small studio apartments on Freshome. Here is another tiny apartment that manages to maximize space and create a cozy living environment as well. The East Village Studio Apartment comes from JPDA Architects, stretches over an area of 46 square meters (500 square feet) and was built as a little “nest” for the owners who also work here. It has all the utilities a common looking contemporary home has and dare we say a lot more. This original crib has storage space and shelves in the most unusual and unexpected places, reducing clutter and contributing to a clean and fresh interior design. The wood gives this home its warmth which is “intensified” by the friendly vegetation pots spread around the open studio.

basecamp mobirise.com Mobirise v3.12.1 mobirise.com Scroll through our gallery Previous Next Basecamp is named for its unique and ultimate storage solutions that can cater to almost every hobby. Boosting a beautiful rooftop deck, this design is built for tiny home owners with passions to spare that want a home base for all of their adventures. Lukas Marxt Imperial Valley (cultivated run-off) | 13:58 min | 2018 The Imperial Valley represents one of California´s most important regions of industrial agriculture. Corporate agricultural production interests have been able to successfully cultivate and exploit this geological part of the Sonora desert through a gigantic irrigation system fed by the Colorado River, as well as the All-American Canal specifically engineered for this purpose and which attained sad notoriety through the Mexican migration movement. The system´s run-off flows through pipes, pumps and canals leading to the Salton Sea, an artificial lake that is approaching ecological as well as economic disaster, just as bordering regions of Mexico. With Imperial Valley (cultivated run-off) Lukas Marxt approaches this problem in a very ingenious way.

Heart of Glass: The Art of Medical Models inShare0 This model, known as Mrs. Einstein, is the most complete vascular system from the head to the toes that FSG makes. It's used to demonstrate the path that catheters make. Photo: Garry McLeod This model shows the main arteries of the brain, including the Circle of Willis and Basilar artery. Shipping Container Architecture - Archisage A lot of cool stuff is happening with shipping containers these days. I got a chance to evaluate use of shipping containers for a project once which got axed because of lack of data & will. It can be tricky especially if you are trying to use shipping containers in a project for the first time; but there are some very creative solutions out there. Check out Hybridseattle - a west coast firm with some very creative (but mostly academic) solutions.