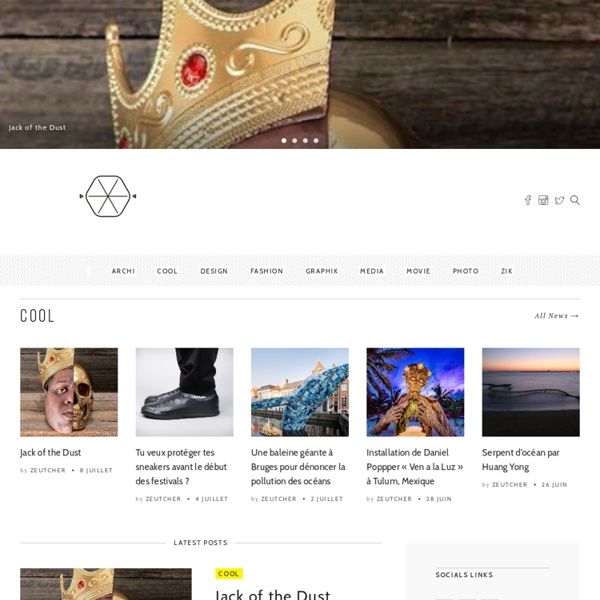 Breathtaking Moleskine Art by Gabriel Picolo 20-year-old artist from Brazil Gabriel Picolo has created an incredible series of doodles using just pencil and pen on a Moleskine sketchbook. 40 Useful Online Generators For Web Designers - Noupe Design Blog Oct 11 2010 Generators can be a great way to save time in your web design projects. High-quality generators can create graphics or code or even layouts in a matter of seconds or minutes, things that might take an hour or more if done by hand. Below are some useful generators to help you speed up your web design process. There’s everything from color scheme tools to complete layout generators included.

ultra look ultra look Photo April 20, 2014 49 notes “Helga and Hildegard”, 2013 from the series “Once Upon A Time” by Julia Murakami A Home For Media Artists Zhou Fan by okmarzo November 30, 2016 Feast your eyes on mind melting landscapes from Zhou Fan aka Chou Fan. The artist is based out of Shanghai, China, who typically paints with acrylics. We previously featured another one his bizarre yet beautiful illustrated series back in May 2010. IDEAS CITY 2015: The Collective NYC Biome Map Petri-plates with bacteria modified with fluorescent protein under UV light, show parts of NYC grid map.(Photo credit Marta Molina Gomez and Ali Schachtschneider). Genspace citizen science biotech lab and scientist Christine Marizzi from Cold Spring Harbor Laboratory’s DNA Learning Center worked together to create a map of NYCs collective microbiome, as part of the New Museum’s IDEAS CITY Festival 2015. Painting with bacteria on site at IDEAS CITY.

This are the Most Creative Business Cards Ever Seen A good business card definitely won’t ensure your success, but it sure can really helpto boost your business ! It can make all the difference in the first impression that you have on someone, or whether or not you leave an impression at all. This are the Most Creative Business Cards Ever Seen. Web Design Comment to Win a Template Posted by admin in Freebies Today we’re pleased to announce a giveaway from TemplateMonster, a US based template selling company. The TemplateMonster team is known for their website templates, WordPress themes, Joomla templates, Magento themes, PrestaShop themes other designs you may need to make a website. There are more than 30,000 templates at templatemonster.com and

2011 Emmy Nominations for Outstanding Main Title Design 09/18/2011 UPDATE: Congrats to Elastic on their Game of Thrones Emmy win. The 2011 Emmy nominations for “Outstanding Main Title Design” have just been announced and some familiar faces (and studios) are back with more outstanding work. Imaginary Forces has two sequences in the running this year, with creative direction on both handled by Karin Fong — HBO’s Boardwalk Empire and AMC’s Rubicon. These will receive the full “Art of the Title” treatment later this year, with an exclusive double-bill interview from Karin.