How To Make A Repeat Pattern by Julia Rothman 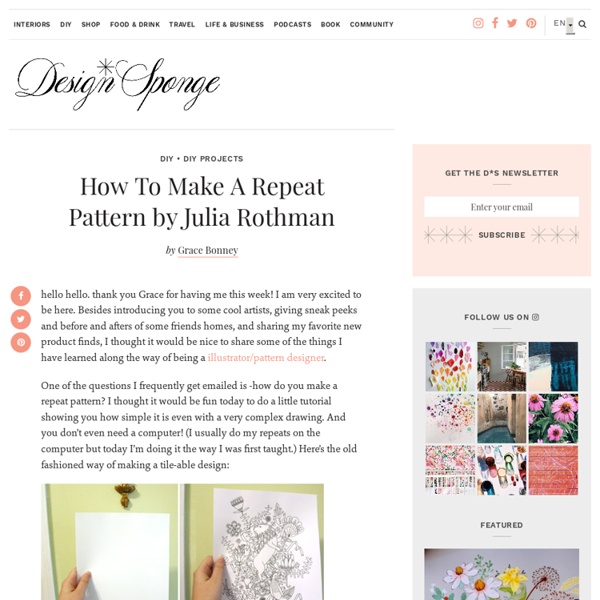 hello hello. thank you Grace for having me this week! I am very excited to be here. Besides introducing you to some cool artists, giving sneak peeks and before and afters of some friends homes, and sharing my favorite new product finds, I thought it would be nice to share some of the things I have learned along the way of being a illustrator/pattern designer. One of the questions I frequently get emailed is -how do you make a repeat pattern? I thought it would be fun today to do a little tutorial showing you how simple it is even with a very complex drawing. And you don’t even need a computer! On a clean piece of paper draw a design in the middle of your paper without letting any of the drawing touch the edges- this is very important. Once you finish the middle space as much as you want you are going to cut your drawing in half- scary I know- but that’s why computers are helpful. Next you are going to cut your drawing in half again the other way- (yikes!) And here’s my finished design:

Scratch Markup Language (.sml) SML (Scratch Markup Language) is a new file format for recording and replaying turntablism. We’ve developed open-source tools for accurately capturing the record and crossfader movements of a scratch DJ, allowing us to analyze, transcribe, and recreate scratch performances. We want to do for turntablism what Graffiti Markup Language has done for tagging — especially teaching giant robot arms how to scratch. At Art Hack Day we collaborated with other artists and programmers to develop the first prototypes of ScratchML.

Ergonomic Input Devices and Accessories for Canadians - Online Resource and Store Strength of Canadian Dollar Translates into Big Savings A good portion of our pricing on ErgoCanada.com is based on the list price in US dollars direct from the manufacturer. With the recent increase in the strength of our dollar against the US dollar, many of the products on the site have been reduced in price, in some cases by as much as $25! Take this opportunity to stock up on products for your home or office workstation, or buy that product that was slightly out of reach of your budget. Flextend Therapeutic Gloves Venus of Urbino A recent theory by Józef Grabski suggests that the painting represents an allegory of marital love between famous Italian poet Vittoria Colonna and her deceased husband, Fernando d'Ávalos. Grabski supports his theory through analyzing various visual clues and symbols, the most prominent being the classic column in front of the trees in the window in the right half, a small detail on the painting that imitates the Colonna Family coat of arms.[5] Description[edit]

How to Land a DJ Sponsorship Have you always dreamed of having boxes of gear shipped to your front door? Your first sponsorship is within reach if you put your best foot forward and approach the company with an enticing pitch. Here’s my advice on how you can make it happen. Formulate Your Game Plan Ji Zhou's Hand-Sculpted Maps Ji Zhou’s new photographic works for Civilized Landscape subvert the object as a vehicle for visual representation and interpretation; maps and books become landscapes of possibility. The process tells as much of a story as the final image does: Ji Zhou collects maps, hand-sculpting them into peaks and troughs to mimic mountaintops. He includes books that are assembled into cantilevered towers resembling city skyscrapers. These ‘rural’ and ‘urban’ illusions are then photographed, further augmenting reality. As always, Ji Zhou chooses to question rather than offer his own conclusions: What is civilization – a constructed illusion created by man or an inevitable product of evolution? What is the truly ‘civilized landscape’– tautology or oxymoron?

Johnny Chung Lee - Projects - Wii As of June 2008, Nintendo has sold nearly 30 million Wii game consoles. This significantly exceeds the number of Tablet PCs in use today according to even the most generous estimates of Tablet PC sales. This makes the Wii Remote one of the most common computer input devices in the world. It also happens to be one of the most sophisticated. How to make a laptop cooling stand Laptops might have been designed with portability and long battery life in mind, but they weren't designed for comfort. Use a laptop on your coffee table for more than five minutes and you're transformed into a warped and twisted, hunchbacked visage of a human being. What you need is something that raises and angles your fine laptop into a more human-friendly angle. And while we do thank a clever clogs for pointing out a book shoved under the back of the laptop would do just that, it's hardly what we'd call an elegant solution.