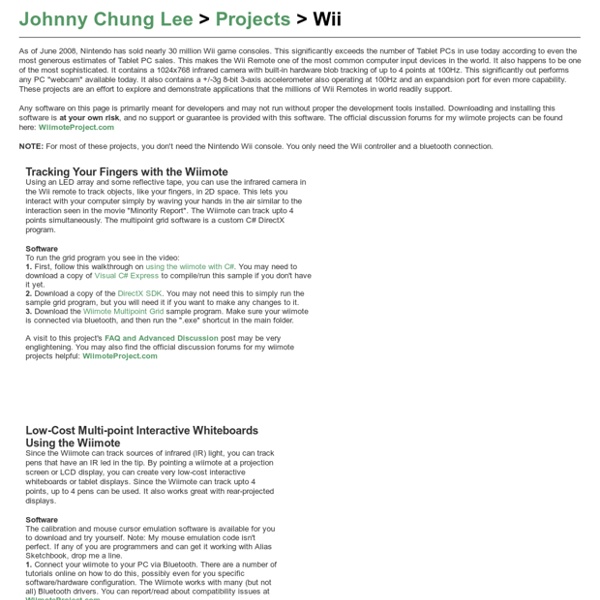 As of June 2008, Nintendo has sold nearly 30 million Wii game consoles. This significantly exceeds the number of Tablet PCs in use today according to even the most generous estimates of Tablet PC sales. This makes the Wii Remote one of the most common computer input devices in the world. It also happens to be one of the most sophisticated. It contains a 1024x768 infrared camera with built-in hardware blob tracking of up to 4 points at 100Hz. This significantly out performs any PC "webcam" available today. Any software on this page is primarily meant for developers and may not run without proper the development tools installed. NOTE: For most of these projects, you don't need the Nintendo Wii console. Coming Later: 3D tracking, and more.... Unfortunately, time constraints in the next couple of months have significantly reduced my ability to work on more projects.

Jersey 1.0.2 JSON and JAXB May 29, 2009 Nick. Posted in tutorial. In a previous post I explained how to unit test JAX-RS. 7 Must See Strangest Gadgets First time here? I hope you'll consider subscribing via RSS or email (it's free). Thanks for visiting! Flying Alarm Clock Find it hard to wake up in the morning? This clock should definitely get you on your feet. USB Wii Sensor Bar USB Wii Sensor Bar Intro Ok, so any search for "Wii wireless sensor bar hack" returns a number of links to the 9V IR bar, or one of several future 3rd-party products. However, after seeing the GlovePIE script for the IR capabilities of the Wiimote, I wanted to build a sensor bar that I could use with my laptop. And since I have plenty of USB ports, I figured why would I want that bulky 9V PCB sensor bar? Gathering the Parts

Geek 24: Gadgets, Techn This is the mother of all top 10 geek lists. We just scoured around and put together a list of all the Top 10 stuff you would find interesting. Starting first with our own Top 10 Geek Movies. Top 10 Geek Movies Top 10 Worst Gadgets 2005 Top 10 Geek Gifts Use Google Refine to Export JSON Tutorial: Use Google Refine to Export JSON Introduction Google Refine is great at cleaning large sets of data. But one amazing under-documented feature is the ability to design and output JSON files. The Battle Continues: Samsung To Appeal Apple’s European Injunction As expected, Samsung has decided to fight back against Apple’s preliminary injunction to ban sales of the Galaxy Tab 10.1 across the European Union (excluding the Netherlands). On August 25, the rumble continues, as Samsung will go to court in Dusseldorf, Germany to appeal the court’s decision, reports the Wall Street Journal. It’s been a long and bloody fight so far, with both sides losing quite a bit of ground. In Samsung’s case, the European injunction is by far the greatest setback.

Weka 3 - Data Mining with Open Source Machine Learning Software in Java Weka is a collection of machine learning algorithms for data mining tasks. The algorithms can either be applied directly to a dataset or called from your own Java code. Weka contains tools for data pre-processing, classification, regression, clustering, association rules, and visualization. It is also well-suited for developing new machine learning schemes. Found only on the islands of New Zealand, the Weka is a flightless bird with an inquisitive nature.

30 Places to Find Open Data on the Web Finding an interesting data set and a story it tells can be the most difficult part of producing an infographic or data visualization. Data visualization is the end artifact, but it involves multiple steps – finding reliable data, getting the data in the right format, cleaning it up (an often underestimated step in the amount of time it takes!) and then finding the story you will eventually visualize. Following is a list useful resources for finding data. Your needs will vary from one project to another, but this list is a great place to start — and bookmark.

CourseWiki - CS448B Data Visualization The world is awash with increasing amounts of data, and we must keep afloat with our relatively constant perceptual and cognitive abilities. Visualization provides one means of combating information overload, as a well-designed visual encoding can supplant cognitive calculations with simpler perceptual inferences and improve comprehension, memory, and decision making. Furthermore, visual representations may help engage more diverse audiences in the process of analytic thinking. In this course we will study techniques and algorithms for creating effective visualizations based on principles from graphic design, visual art, perceptual psychology, and cognitive science. The course is targeted both towards students interested in using visualization in their own work, as well as students interested in building better visualization tools and systems. There are no prerequisites for the class and the class is open to graduate students as well as advanced undergraduates.

How It Works Socrative is a smart student response system that empowers teachers by engaging their classrooms with a series of educational exercises and games. Our apps are super simple and take seconds to login. Socrative runs on tablets, smartphones, and laptops. Teachers login through their device and select an activity which controls the flow of questions and games.