How to Get All The Different Endings in 'Papers, Please' Tips and Guide. If you haven't played Papers, Please[$7.99 (HD)] yet, I am going to save you some time. 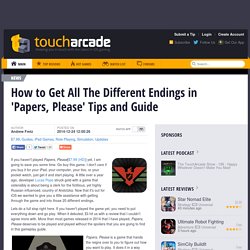 Go buy this game. How to top the podium: Motorsport Manager hints, tips, and tricks. Motorsport Manager is by no means the most complicated of sims, but there are a few things you need to keep an eye on if you want to make sure you're sitting on top of the podium, doused in champagne at the end of every race. 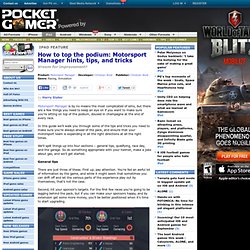 In this guide we'll walk you through some of the tips and tricks you need to make sure you're always ahead of the pack, and ensure that your motorsport team is expanding in all the right directions at all the right times. We'll split things up into four sections – general tips, qualifying, race day, and the garage. So do something appropriate with your helmet, make a joke about gas, and we'll get started. General tips There are just three of these.

Second, hit your sponsor's targets. And lastly, try not to focus too heavily on a single driver. If it looks like one of your drivers isn't up to scratch, come the end of the season it's worth kicking them to the kerb and hiring someone with a few more skills. Field Marshal Owen's Guide to Commander: The Great War (for Noobs) - Pocket Tactics.

Home by Christmas, they said. 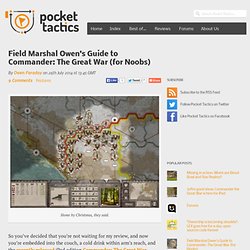 So you’ve decided that you’re not waiting for my review, and now you’re embedded into the couch, a cold drink within arm’s reach, and the recently released iPad edition Commander: The Great War loaded up. Good choice. I’m terribly fond of this game, and non-wargamers need not be intimidated by it. Commander is a turn-based, grand strategy-level wargame based on the First World War. It is an admirable attempt to do justice to an enormously complex, globe-spanning war — so while not a terribly complex game, it still has a number of different levers one must learn to operate to get the most from it. 'World Of Tanks Blitz' Guide - Tips For Winning Without Spending Real Money. World Of Tanks Blitz [Free] manages to pull off the difficult task of capturing the essence of its much-loved PC counterpart, allowing you to get into some pretty tense tank battles with players from around the world. 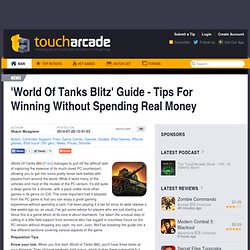 While it lacks many of the vehicles and most of the modes of the PC version, it's still quite a deep game for a shooter, with a pace unlike most other games in its genre on iOS. The most important trait it adopted from the PC game is that you can enjoy a great gaming experience without spending a cent. I've been playing it a fair bit since its wide release a few weeks ago so, as usual, I've got some advice for players who are just starting out. Since this is a game which at its core is about teamwork, I've taken the unusual step of calling in a little field support from someone who has logged in countless hours on the PC version without dropping any cash: my son, Juon. We'll be breaking the guide into a few different sections covering various aspects of the game. Minecraft - Pocket Edition: The complete crafting, smelting, and stonecutting guide for iOS and Android.

Minecraft - Pocket Edition is all about building ridiculous architectural wonders by finding raw resources in the world and crafting them into handy tools and building materials. 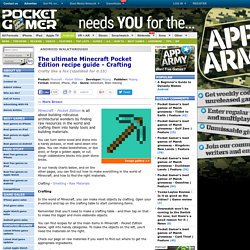 You can turn some wood and stone into a hardy pickaxe, or melt sand down into glass. You can make bookshelves, or dye wool, or forge a golden apple, or cut rough cobblestone blocks into posh stone bricks. In our handy charts below, and on the other pages, you can find out how to make everything in the world of Minecraft, and how to find the right materials. Crafting - Smelting - Raw Materials Crafting In the world of Minecraft, you can make most objects by crafting. Remember that you'll need to make a crafting table - and then tap on that - to make the bigger and more elaborate objects. You can find recipes for all the main items in Minecraft - Pocket Edition below, split into handy categories. Check our page on raw materials if you want to find out where to get the appropriate ingredients. 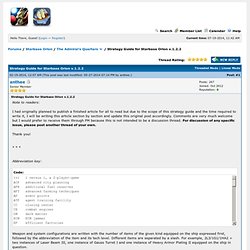 Game Settingsor Know Your Battleground Now that we have an understanding of basic mechanics related to productivity in SO, it is possible to take a look at the different options available when setting up a new game and what those options mean with regards to game strategy. Because this guide is meant primarily for games between two human players, I will ignore options concerning the number of opponents, game type, victory type and diplomacy, as well as AI options. This leaves us with the following options that are relevant in 1v1 games: Disco Zoo ZooPedia - the complete pattern guide for every animal. Updated on March 20th, at 21:31: We've added the five new animals from the Ice Age update. 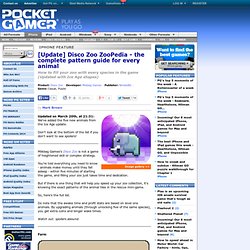 Don't look at the bottom of the list if you don't want to see spoilers! Milkbag Games's Disco Zoo is not a game of heightened skill or complex strategy. You're told everything you need to know - animals make money until they fall asleep - within five minutes of starting the game, and filling your zoo just takes time and dedication. But if there is one thing that will help you speed up your zoo collection, it's knowing the exact patterns of the animal tiles in the rescue mini-game.

So, here's the full list. Do note that the awake time and profit stats are based on level one animals. Watch out: spoilers abound. Farm SheepRarity: Common / Coins per minute: 3 / Awake time: 4m.