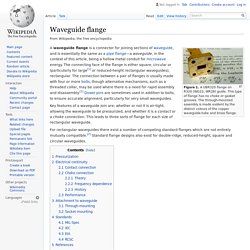 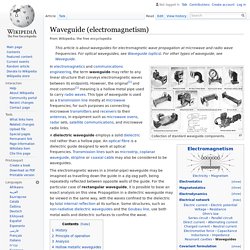 A dielectric waveguide employs a solid dielectric rod rather than a hollow pipe. An optical fibre is a dielectric guide designed to work at optical frequencies. Transmission lines such as microstrip, coplanar waveguide, stripline or coaxial cable may also be considered to be waveguides. Arrayed waveguide grating. ARROW waveguide. In optics, an anti-resonant reflecting optical waveguide (ARROW) is formed from an anti-resonant Fabry–Pérot reflector. 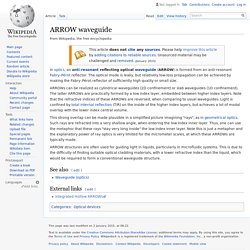 The optical mode is leaky, but relatively low-loss propagation can be achieved by making the Fabry–Pérot reflector of sufficiently high quality or small size. ARROWs can be realized as cylindrical waveguides (2D confinement) or slab waveguides (1D confinement). The latter ARROWs are practically formed by a low index layer, embedded between higher index layers. Note that the refractive indices of these ARROWs are reversed, when comparing to usual waveguides. Light is confined by total internal reflection (TIR) on the inside of the higher index layers, but achieves a lot of modal overlap with the lower index central volume.

This strong overlap can be made plausible in a simplified picture imagining "rays", as in geometrical optics. ARROW structures are often used for guiding light in liquids, particularly in microfluidic systems. See also[edit] External links[edit] Non-radiative dielectric waveguide. The essential difference between the H waveguide and the NRD guide is that in the latter the spacing between the metallic plates is less than half the wavelength in a vacuum, whereas in the H waveguide the spacing is greater. 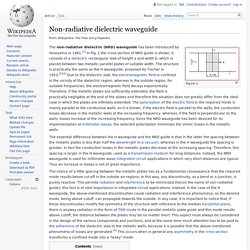 In fact the conduction losses in the metallic plates decrease at the increasing spacing. Therefore, this spacing is larger in the H waveguide, used as a transmission medium for long distances; instead, the NRD waveguide is used for millimeter wave integrated circuit applications in which very short distances are typical. Thus an increase in losses is not of great importance. Earth–ionosphere waveguide. The Earth–ionosphere waveguide[1] refers to the phenomenon in which certain radio waves can propagate in the space between the ground and the boundary of the ionosphere. 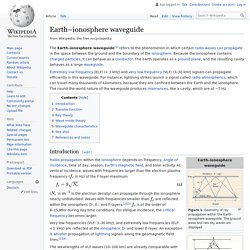 Because the ionosphere contains charged particles, it can behave as a conductor. The earth operates as a ground plane, and the resulting cavity behaves as a large waveguide. Extremely low frequency (ELF) (< 3 kHz) and very low frequency (VLF) (3–30 kHz) signals can propagate efficiently in this waveguide. For instance, lightning strikes launch a signal called radio atmospherics, which can travel many thousands of miles, because they are confined between the Earth and the ionosphere. Zero-mode waveguide. A zero-mode waveguide is an optical waveguide that guides light energy into a volume that is small in all dimensions compared to the wavelength of the light. 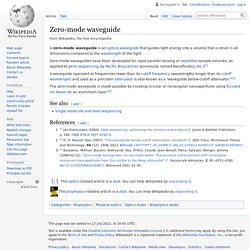 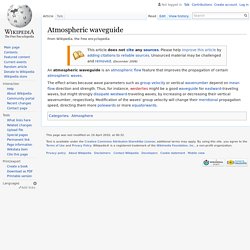 The effect arises because wave parameters such as group velocity or vertical wavenumber depend on mean flow direction and strength. Thus, for instance, westerlies might be a good waveguide for eastward-traveling waves, but might strongly dissipate westward-traveling waves, by increasing or decreasing their vertical wavenumber, respectively. Modification of the waves' group velocity will change their meridional propagation speed, directing them more polewards or more equatorwards. Post-wall waveguide. Slotted waveguide. The slotted waveguide antenna used by radar for traffic observation (see highlighted area). 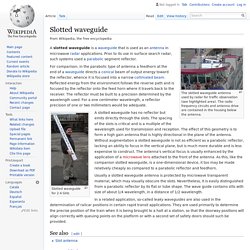 The radio frequency circuits and antenna drive are contained in the housing below the antenna. Slotted waveguide for 2.4 GHz. Waveguide filter. Figure 1. 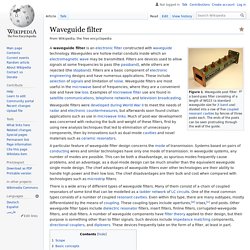 Waveguide post filter: a band-pass filter consisting of a length of WG15 (a standard waveguide size for X band use) divided into a row of five coupledresonant cavities by fences of three posts each. The ends of the posts can be seen protruding through the wall of the guide. Waveguide filters were developed during World War II to meet the needs of radar and electronic countermeasures, but afterwards soon found civilian applications such as use in microwave links. Much of post-war development was concerned with reducing the bulk and weight of these filters, first by using new analysis techniques that led to elimination of unnecessary components, then by innovations such as dual-mode cavities and novel materials such as ceramic resonators.

Coplanar waveguide. Coplanar waveguide is a type of electrical transmission line which can be fabricated using printed circuit board technology, and is used to convey microwave-frequency signals. 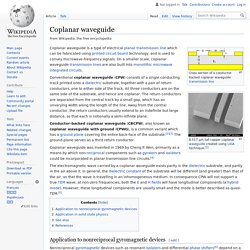 On a smaller scale, coplanar waveguide transmission lines are also built into monolithic microwave integrated circuits. Conventional coplanar waveguide (CPW) consists of a single conducting track printed onto a dielectric substrate, together with a pair of return conductors, one to either side of the track.

All three conductors are on the same side of the substrate, and hence are coplanar. The return conductors are separated from the central track by a small gap, which has an unvarying width along the length of the line. Away from the cental conductor, the return conductors usually extend to an indefinite but large distance, so that each is notionally a semi-infinite plane. Waveguide. Electric field Ex component of the TE31 mode inside an x-band hollow metal waveguide.

A waveguide is a structure that guides waves, such as electromagnetic waves or sound waves. They enable a signal to propagate with minimal loss of energy by restricting expansion to one dimension or two. This is a similar effect to waves of water constrained within a canal, or why guns have barrels that restrict hot gas expansion to maximize energy transfer to their bullets. Without the physical constraint of a waveguide, signals will typically dissipate according to the inverse square law as they expand into three dimensional space. There are different types of waveguides for each type of wave. Waveguides. Waves (physics)