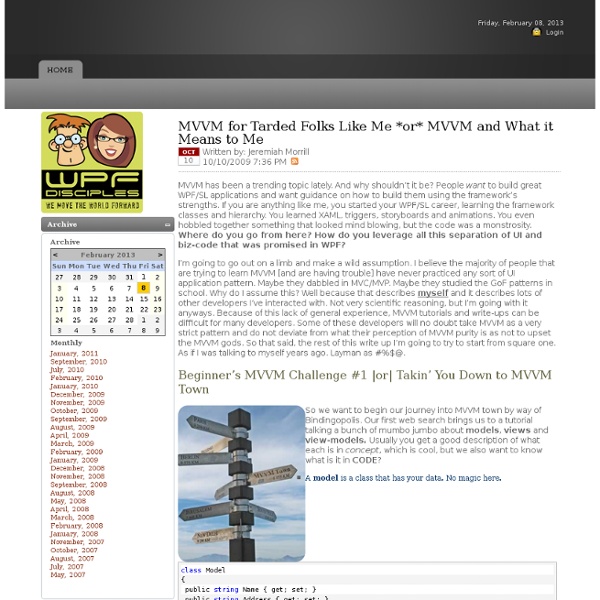 MVVM has been a trending topic lately. And why shouldn’t it be? People want to build great WPF/SL applications and want guidance on how to build them using the framework’s strengths. If you are anything like me, you started your WPF/SL career, learning the framework classes and hierarchy. You learned XAML, triggers, storyboards and animations. I’m going to go out on a limb and make a wild assumption. Beginner’s MVVM Challenge #1 |or| Takin’ You Down to MVVM Town So we want to begin our journey into MVVM town by way of Bindingopolis. A model is a class that has your data. class Model public string Name { get; set; } public string Address { get; set; } A view is, for the sake of explanation, is a UserControl. /// Interaction logic for View.xaml public partial class View : UserControl public View() InitializeComponent(); A View-Model is, again, just another class. class ViewModel : INotifyPropertyChanged private Model m_model; public ViewModel() m_model = new Model(); public string Name set Grid >

The MVVM Pattern Is Highly Overrated Update: check out my MVP In Silverlight/WPF series which discusses the MVP approach as an alternative to MVVM If you're doing Silverlight or WPF, you've no doubt come across the MVVM (Model-View-ViewModel) pattern. It seems to be the most popular client-side architecture pattern used among Silverlight/WPF developers. First, let's briefly cover what MVVM is about for those of you who don't know yet. The ViewModel typically contains properties for the data that is to be shown in the View, and also raises notification events when the data in those properties changes. That is, in a nutshell, how the MVVM pattern works. In most (if not all) MVVM implementations, a ViewModel has many possible reasons to be changed. Lets forget about MVVM for a second and focus on the concerns and responsibilities that a user control can have... say, a user control that shows customer information and allows the user to edit that data so it can be persisted: View: ViewModel: Presenter: Presentation Model:

MVVM Explained MVVM Pattern Made Simple Download source - 123.66 KB Important Note Friends, I would very much appreciate if you leave me a line or two in the comments section stating how you think this article can be improved and what other topics on MVVM you want me to cover. Thanks. Introduction As many companies are switching from WinfForms to WPF/Silverlight, several project managers recently asked me almost identical questions about MVVM: What is MVVM Pattern? The purpose of this article is to answer these questions and to explain the MVVM pattern in the simplest possible way. I assume that the article readers have not had any previous exposure to the MVVM pattern but have some knowledge of WPF or Silverlight. Time permitting, I plan to write more MVVM articles which will include comparison of different MVVM frameworks and introduce a new MVVM framework. MVVM Overview Model is a set of classes representing the data coming from the services or the database. WPF Bindings These properties serve as the source properties.

THE MODEL-VIEW-VIEWMODEL (MVVM) DESIGN PATTERN FOR WPF Patterns WPF Apps With The Model-View-ViewModel Design Pattern Josh Smith Developing the user interface of a professional software application is not easy. It can be a murky blend of data, interaction design, visual design, connectivity, multithreading, security, internationalization, validation, unit testing, and a touch of voodoo. There are popular design patterns that can help to tame this unwieldy beast, but properly separating and addressing the multitude of concerns can be difficult. It is not always the design patterns at fault. As the software world continues to adopt WPF at an increasing rate, the WPF community has been developing its own ecosystem of patterns and practices. By the end of this article, it will be clear how data templates, commands, data binding, the resource system, and the MVVM pattern all fit together to create a simple, testable, robust framework on which any WPF application can thrive. Order vs. The Evolution of Model-View-ViewModel The Demo Application

MVVM Compared To MVC and MVP Saturday, November 21, 2009 6:53 PM At the recent Calgary Tech Days event I did a presentation on building composite applications with WPF and Silverlight. One question that I get asked frequently when I get to the part of explaining MVVM is how its different from patterns that seem too similar or identical, with MVC and MVP typically being the two common ones raised. Usually my answer is that MVVM is very similar to the others, but it implies *stuff* that’s specific to Silverlight and WPF (how binding works, commanding, etc.). So below I have a comparison, pointing out the key differences between the patterns and why MVVM *is* different. MVC – Model View Controller Let’s look at MVC first. The input is directed at the Controller first, not the view. There is a many-to-one relationship between the Controller and the View. Note the one way arrow from Controller to View. MVP – Model View Presenter Now let’s look at the MVP pattern. The input begins with the View, not the Presenter. Conclusion

Evaluation of MVVM « Zeeshan Amjad's WPF Blog Let’s take a look at MVVM from higher level and take a step by step approach to understand it. Here our discussion is based on complexity of the architecture from simple to complex, not from historical order. Probably the simplest design principle to separate the data from its presentation is Observer design pattern. In observer design pattern, we have two different classes for data (subject/model) or its presentation (observer/view). Subject class contain the instance of all of the observers and send notification to all of observers when there is any change in the data. The next step is to introduce middle layer in between data and its presentation. This approach has some advantages and disadvantages. MVVM is very similar to MVP pattern. Now let’s take a look at MVVM little bit more detail. This diagram explain how can we take advantage of MVVM. Like this: Like Loading...

WPF patterns : MVC, MVP or MVVM or…? :: Orbifold Introduction Since XAML things have become a bit complicated in trying to conceptualize MVC architectures for Windows applications. The gap between web and win is narrowing and the whole WPF thing adds diverse possibilities to one's toobox. What to use? What's the problem? WPF has changed a few things: through declarative programming (i.e. The MVVM architecture Overview DataModel DataModel is responsible for exposing data in a way that is easily consumable by WPF. The model Using the INotifyPropertyChanged you can bubble changes up the stack. Dispatcher things The DispatcherTimer is reevaluated at the top of every Dispatcher loop. the timer is injected implicitly in the thread associated to the dispatcher of the UI. References

Blog.Rees.Biz: Mvvm Pattern Overview: MVVM stands for Model-View-ViewModel. This is a variation of the MVC pattern, and although MVVM has a controller like component called the ViewModel, I personally find it easier to still call this the controller. The basic premise of any derivative of the MVC Pattern. The main idea of MVVM is to take full advantage of WPF Data-Binding to allow very loose coupling between the Controller and the View. More Info Links: Here's a quick reference list of resources on the WPF MVVM pattern. Here's a diagram from Karl Shifflett giving a good overview of what each component of the MVVM model contains: Coupling Between Views and Controllers There are two schools of thought on how exactly to link your views to your controllers. The Purist Loose Couple Approach Following the loose coupling purist path neither the views nor the controllers have links to each other. The code before: 9 var window = new MainWindow(); 10 var viewModel = new MainWindowViewModel("Data/customers.xml"); 15 window.Close();

Model View ViewModel MVVM facilitates a clear separation of the development of the graphical user interface (either as markup language or GUI code) from the development of the business logic or back end logic known as the model (also known as the data model to distinguish it from the view model). The view model of MVVM is a value converter[4] meaning that the view model is responsible for exposing the data objects from the model in such a way that those objects are easily managed and consumed. In this respect, the view model is more model than view, and handles most if not all of the view’s display logic (though the demarcation between what functions are handled by which layer is a subject of ongoing discussion[5] and exploration). The view model may also implement a mediator pattern organising access to the backend logic around the set of use cases supported by the view. History[edit] Microsoft MVP Josh Smith reported[6] that A notable Javascript implementation of this pattern is Knockout.js. Timeline[edit]