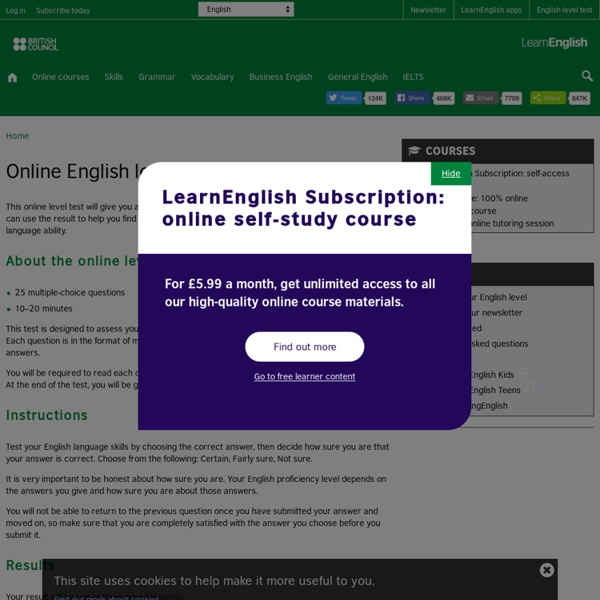 This online level test will give you an approximate indication of your English proficiency level. You can use the result to help you find content on our website that is appropriate for your English language ability. About the online level test 25 multiple-choice questions 10–20 minutes This test is designed to assess your understanding of English grammar, vocabulary and phrasing. Each question is in the format of multiple choice and you will have a choice of three possible answers. You will be required to read each question carefully and select the answer that you think is correct. Instructions Test your English language skills by choosing the correct answer, then decide how sure you are that your answer is correct. It is very important to be honest about how sure you are. You will not be able to return to the previous question once you have submitted your answer and moved on, so make sure that you are completely satisfied with the answer you choose before you submit it. Results

5 TED-Ed Lessons for book lovers When did novels stop being novel? Do comic books belong in school? How do you make a pop-up book, anyway? What are the 21st-century skills every student needs? The gap between the skills people learn and the skills people need is becoming more obvious, as traditional learning falls short of equipping students with the knowledge they need to thrive, according to the World Economic Forum report New Vision for Education: Fostering Social and Emotional Learning Through Technology. Today's job candidates must be able to collaborate, communicate and solve problems – skills developed mainly through social and emotional learning (SEL). Combined with traditional skills, this social and emotional proficiency will equip students to succeed in the evolving digital economy. What skills will be needed most? An analysis of 213 studies showed that students who received SEL instruction had achievement scores that averaged 11 percentile points higher than those who did not. And SEL potentially leads to long-term benefits such as higher rates of employment and educational fulfillment.

Oxford City Council praised for introducing gender neutral 'MX' title on paperwork One of the country’s biggest councils has been praised for introducing gender neutral titles on forms. Oxford City Council told The Independent it has approved plans to include ‘Mx’ as an option on paperwork, alongside traditional terms such as Miss, Ms, Mrs and Mr. The change was made following recommendations from the council’s Equality and Diversity Group as a means of making the council more trans-inclusive; including non-binary people who can prefer the ‘Mx’ title as it does not denote a gender. Councillor Tom Haynes, Vice-Chair of Oxford City Council Scrutiny Committee told The Independent: “The council’s workforce has been changing to look more like the diverse communities that it serves. Good policies have helped to bring this about and tackle discrimination but further improvements are possible.

The 10 Best Places to Find ELT Listening Materials – Teach them English This domain name may be for sale. Please click here to inquire. teachthemenglish.com Creative Commons Explained In Simple Terms Whenever I give a presentation or run a workshop about student video projects, I spend time explaining what Creative Commons licensing is and its benefits for consumers and producers of media. Sometimes in my workshops I use Common Craft's explanation of Creative Commons licenses and what they mean for consumers and producers of media. I've embedded the video below. Applications for EducationCopyright and Creative Commons Explained by Common Craft can be very useful in helping students understand why they cannot simply copy and paste whatever images they like that they find online. Murder in the Classroom - Murder Mystery Game - Education of 21 Share Murder in the Classroom - Murder Mystery Game Description This is an activity for the ESL classroom though it can alo be used in other contexts. The slide deck is adapted from “Murder in the the Classroom” a lesson plan on One Stop English and you can find that via the link below.

Placement test for learners of English Placement tests are very important for students of languages. First, they can serve as motivation because they show whether the students improved their knowledge. Second, they help students choose the correct course on their level. And last but not least they inform students how good their English is. However, good placement tests are very expensive and mostly printed. That is why we have decided to create a placement test that will be available for free and in electronic form.

The Entire BusyTeacher Library: 80 E-Books for Busy English Teachers – The Busy Teacher Store “ Wow! What a fantastic resource. I’m really so impressed both in terms of quantity and quality of materials and ideas. It certainly is an entire library. I don’t think I’ll ever need to buy another ELT book again. ”

How sugar affects the brain - Nicole Avena Dr. Avena’s website has links to new research and articles about the effects of sugar on the brain and behavior, and how this can influence body weight.Want to learn more about the adverse effects of sugar? Read Food Junkie, Dr.

Crazy Vocabulary - learn 11 new words in a rap Scientists claim that the center for rythm is located next to the long-term memory in our brain. Knowing this, we could exploit it to the students’ benefit and teach them vocabulary through rhymes or raps. So, I tried to create the following rap to teach the students the following words: beach, prefer, rhyme, crazy, bone, railway, clothes, lots, fun, sand and shower. Crazy Vocabulary Rap -video First listen to the following rap and answer the comprehension questions under the video. ADVERTISEMENT: ToonyTool - Quickly Create Single Frame Comics ToonyTool is a free website for quickly creating single frame comics. To get started with ToonyTool simply go to site and either upload a background picture or choose one of their background picture options. Then you can choose comic characters to appear in your comic.

‘The Breakfast Club’: 8 Quotes For When You Need To Be Yourself Universal Pictures “Just be yourself” is a fairly common message in the teen film genre, but few have navigated the universal feelings as well as The Breakfast Club. While the question over which John Hughes film is the best is frequently pondered, the tale of the brain, the athlete, the criminal, the princess, and the basket case is almost always at the top of the list. While many teen classics feel less than genuine once you cross the threshold into your twenties, there is a timelessness to The Breakfast Club‘s transparency that manages to help it avoid feeling hopelessly dated.