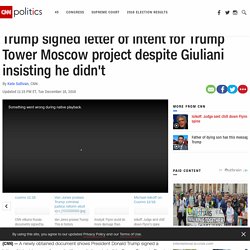 The letter is dated October 28, 2015, and bears the President's signature. When asked on Sunday about the letter, Giuliani incorrectly told CNN's Dana Bash that it had not been signed. "It was a real estate project. There was a letter of intent to go forward, but no one signed it," Giuliani told Bash. The non-binding document is also signed by Andrey Rozov, owner of I.C. Trump did not tell the public during the 2016 presidential campaign that his company explored the business deal with Russia and instead repeatedly claimed he had "nothing to do with Russia. " The special counsel's team investigating Russian interference in the 2016 presidential election alleges the deal could have been lucrative for the Trump Organization. CNN previously obtained a draft of the letter that Trump eventually signed. 'Go back to Fox': CNN's Chris Cuomo says he won't let Kellyanne Conway tell lies on his show. CNN's Chris Cuomo call BS on Rick Santorum demanding 'civility' while refusing to require it of Trump. 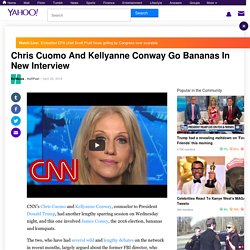 The two, who have had several wild and lengthy debates on the network in recent months, largely argued about the former FBI director, who Conway slammed as a “leaker.” Cuomo said Comey “without question” had damaged the Hillary Clinton campaign when he announced that the FBI was looking into new emails right before the 2016 election. “No. CNN's Cuomo: Putin's latest Russian hooker statement is another example of how he humiliates Trump. CNN panel laughs out loud at Kellyanne Conway’s stunning flip-flop on Rod Rosenstein. Kellyanne Conway angrily erupts at CNN's Chris Cuomo as he grills her over Trump's hateful obsession with Comey. CNN's Chris Cuomo nails Sarah Sanders on Trump's immigration lies: He only wants you if you're 'rich and white' 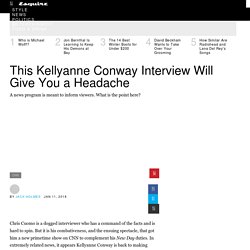 But it is his combativeness, and the ensuing spectacle, that got him a new primetime show on CNN to complement his New Day duties. In extremely related news, it appears Kellyanne Conway is back to making appearances on your TV screen, despite that it was painfully obvious at least a year ago that the counselor to the president will never be a force for accurately informing viewers. Cuomo had Conway on Wednesday night for a prize fight that proved to be the ultimate example of the CNN strategy, at times, since 2015: politics as reality show.

CNN’s Chris Cuomo wipes smirk off Trump homeland security adviser’s face in battle over Puerto Rico. ‘Put the hard hat on — get back to DC’: CNN’s Cuomo nails Texas GOPer who voted against Sandy aid. Watch CNN’s Cuomo read the riot act to Trump advocate still claiming both sides were at fault in Charlottesville. CNN host Chris Cuomo lectured a supporter of President Donald Trump for continuing to push his bold assertion that both neo-Nazis and counter-protesters were equally at fault in the violence that tore Charlottesville apart last weekend. 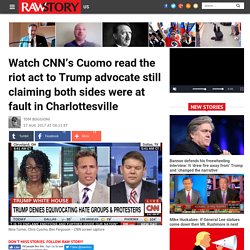 Appearing on a panel with former Ohio lawmaker Nina Turner, conservative Ben Ferguson attempted to both finesse and disavow Trump’s comments at an impromptu press conference on Tuesday, only to have Cuomo claim he ended up sounding like Trump. “Ben, I get the argument that the president did say it, he did say he rejects bigotry,” Cuomo began. “It’s about how, Ben. You know if you were in that position, not as president, but you have your own following, people come to you, they listen to your show, you’re a moral agent for a lot of your listeners. you would have said, ‘the KKK, they’re despicable, they went down that there provoke — this is who they are and what they’re about.'” WATCH: Chris Cuomo calls BS on Trump: ‘You ask us to define the alt-right — turn around and ask your advisor’ ‘Two men enter, one man leaves’: CNN’s Cuomo ridicules Trump’s chaotic ‘Thunderdome’ White House. WATCH: CNN’s Chris Cuomo fills in the obscene blanks as Alisyn Camerota reads Scaramucci’s ‘c*ck’ rant.

‘You want to be a leader? Do it’: CNN’s Cuomo challenges GOP candidate to condemn Trump tweets — and she wilts. Appearing on CNN Friday morning, the former co-chair of President Donald Trump’s campaign in Michigan ran into a buzzsaw when host Chris Cuomo put her on the spot and pushed her to directly address the president on national TV and tell him to stop attacking women. 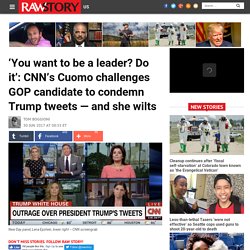 Instead, Lena Epstein — who is running against Sen. Debbie Stabenow (D) for one of Michigan’s two Senate seats — accused Cuomo of pressuring her to say something she is “not willing to say.” After Epstein attempted a defense of Trump’s “facelift” tweets, attacking the media for being unfair to Trump and wishing the whole “twitter conversation” would go away for America’s sake, host Cuomo pressed her to address Trump. “You have no message for the president of the United States, this isn’t about a twitter conversation so don’t cheapen it that way,” Cuomo lectured Epstein. “This is about the nature and content of the words that the president of the United States uses for his critics and often his allies. “Why not?” “You know what? Chris Cuomo Paints Kellyanne Conway As A Liar During Heated Interview. <a class="icopyright-article-tools-noscript" href=" target="_blank" title="Main menu of all reuse options"><img height="25" width="27" border="0" align="bottom" alt="[Reuse options]" src=" Click here for reuse options! 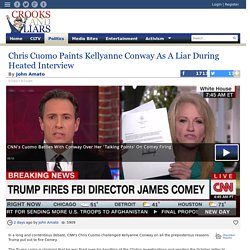 </a> In a long and contentious debate, CNN's Chris Cuomo challenged Kellyanne Conway on all the preposterous reasons Trump put out to fire Comey. The Trump camp is claiming that he was fired over his handling of the Clinton investigations and sending the October letter to Congress and that the rank and file members at the FBI do not respect Comey anymore because he made it political. And then she tried to use former NSA Director James Clapper's testimony to rebuke the entire Russia/Trump investigation. "As recently as yesterday, you had a prominent Democrat saying he sees no evidence of Russia and collusion. "What happened yesterday? " "You've got Democrats saying that they don't see any evidence of Russia collusion. " Conway got angry and replied, "It's not a talking point. Chris Cuomo stunned as Kellyanne Conway says it’s inappropriate to question Trump’s Comey firing. 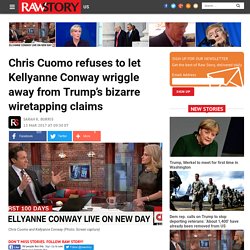 “I’m not going to discuss who he calls and who he didn’t call,” Conway said on Cuomo’s show Monday morning. “Sean Spicer did. He said he didn’t reach out to him,” Cuomo said, noting that the wiretap charge is fundamentally different than leaks and should be part of the investigation. “He could answer it himself. ‘They will lose coverage!’: Chris Cuomo hammers GOP lawmaker over the consequences of Trumpcare. Watch Carly Fiorina explode at CNN’s Chris Cuomo for refusing to allow her to continue to lie about Planned Parenthood. Fading Republican presidential hopeful Carly Fiorina appeared on CNN’s “New Day” Friday only to discover that co-host Chris Cuomo remembered he was a journalist and was intent on holding her feet to the pro-life fires she’s been stoking since this summer. 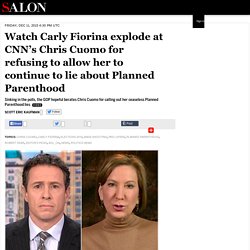 Cuomo suggested that the man who shot up a Planned Parenthood clinic in Colorado, Robert Dear, was “influenced by some of the rhetoric that was coming out of you that painted a very ugly, unfair picture of Planned Parenthood.” “Oh really, Chris?” Fiorina testily replied. “There have been nine videos, it is very clear what Planned Parenthood have been doing. Several weeks ago, Planned Parenthood made a quiet little announcement that they would no longer accept compensation for what they call ‘fetal tissue.’ CNN segment goes off the rails when Cuomo calls out RNC official’s lies about Trump’s ‘overwhelming’ win. The Republican National Committee’s communications director tried to wave away Donald Trump’s conflicts of interest — but CNN’s Chris Cuomo wouldn’t let him. 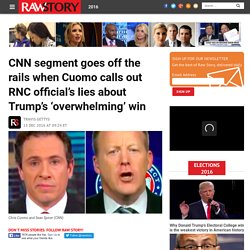 Sean Spicer, the RNC strategist who’s advising the transition team, said Trump has been “unbelievably transparent” about his business dealings and the roles of his children in his administration — but he suggested that shouldn’t even matter. “The American people have understood exactly what they’re getting, and they voted overwhelmingly for him,” Spicer said Thursday. “He has been very clear about what he owns, the role of his family and everything else since he announced that he was running for president — and they overwhelmingly elected him with all of that on the table.” Spicer suggested reporters were trying to delegitimize Trump by “combing through certain documents,” but he said the president-elect had only grown more popular since his election.

Cuomo stepped in to correct Spicer on nearly every point he had just made. Chris Cuomo Nails Kellyanne Conway for Ridiculous Defense of Trump Sons' Selling Access to Their Dad. Kellyanne Conway has not only drunk the Trump Kool-Aid, it's running in her veins. 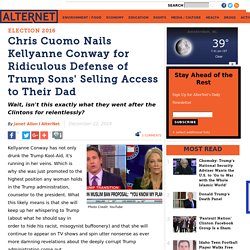 Which is why she was just promoted to the highest position any woman holds in the Trump administration, counselor to the president. What this likely means is that she will keep up her whispering to Trump (about what he should say in order to hide his racist, misogynist buffoonery) and that she will continue to appear on TV shows and spin utter nonsense as ever more damning revelations about the deeply corrupt Trump administration come out. Chris Cuomo grilled Conway Wednesday about the almost laughably blatant way the Trump sons are selling access to their dad. The hefty $1 million pricetag on a sitdown with the Trumpster was supposedly all for a well-meaning charity. Hmmm, Cuomo wondered, isn't that sort of like what the Trump campaign was hammering Clinton about? Conway tried to pivot back to the Clintons, spewing allegations that were often repeated during the campaign and proven untrue. ‘Everybody can see it’: CNN’s Chris Cuomo fights Kellyanne Conway’s denials that Trump mocked reporter.

Kellyanne Conway spent Monday morning mopping up after Meryl Streep excoriated Donald Trump during a Golden Globes speech the night before. Conway, who served as Trump’s campaign manager, appeared on CNN’s “New Day” and questioned whether celebrities should bring up politics during awards shows. “They can say what they want, but they have to be held to account,” Conway said.

Streep, who won a lifetime achievement award, criticized Trump — without saying his name — for mocking a disabled reporter who had angered him, but Conway echoed her boss and denied it. “Why can’t you give him the benefit of the doubt?” Conway said, and tried to change the subject to polls and analysts who predicted Trump would lose the election. Chris Cuomo utterly destroys Sean Spicer’s schizophrenic answers on FBI probe of Trump.