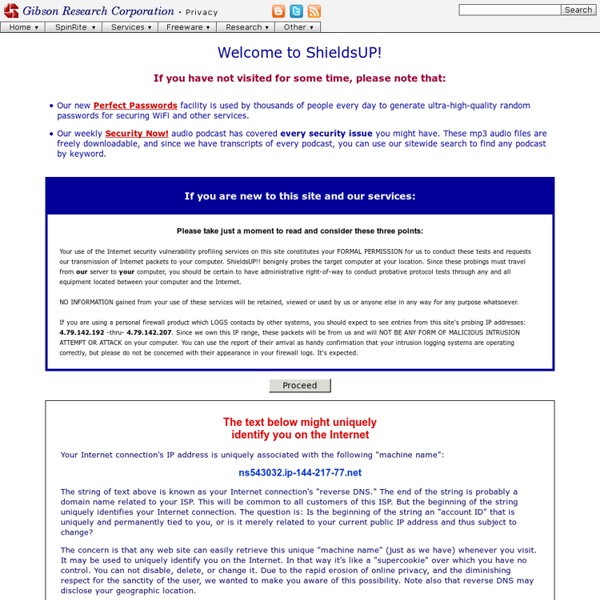 Your Internet connection's IP address is uniquely associated with the following "machine name": The string of text above is known as your Internet connection's "reverse DNS." The end of the string is probably a domain name related to your ISP. This will be common to all customers of this ISP. But the beginning of the string uniquely identifies your Internet connection. The question is: Is the beginning of the string an "account ID" that is uniquely and permanently tied to you, or is it merely related to your current public IP address and thus subject to change? The concern is that any web site can easily retrieve this unique "machine name" (just as we have) whenever you visit. If the machine name shown above is only a version of the IP address, then there is less cause for concern because the name will change as, when, and if your Internet IP changes. There is no standard governing the format of these machine names, so this is not something we can automatically determine for you.

Chromium Notes: The story of Iron Update from 2013: this post was written in 2009. While the statements it made about Chrome were true then, Chrome today is a much different project. Iron claims to be a "privacy-oriented" fork of Chrome, which removes a bunch of pieces that the Iron author claims are privacy invasive. In the abstract this is a thing I'd support -- nothing like some publicity to put pressure on the project to be more careful about user privacy -- but when you look at the details it kinda falls down.

Password Haystacks: How Well Hidden is Your Needle?   ... and how well hidden is YOUR needle? Every password you use can be thought of as a needle hiding in a haystack. After all searches of common passwords and dictionaries have failed, an attacker must resort to a “brute force” search – ultimately trying every possible combination of letters, numbers and then symbols until the combination you chose, is discovered.

worthless information about your worthless mouse Your mouse's polling rate determines how often it sends data to your operating system. All mouse movements (counts) and button presses must wait in the mouse until windows polls for them. By default, windows will poll a usb mouse every 8 milliseconds (125hz). You can increase the frequency of polling with a number of programs/drivers/registry fixes. All this does is reduce the delay of sending the mouse data to the operating system.

Technology Your Security Is Our Priority Availability You need to always have access to your data, we've accomplished this in multiple ways, first we have 2 data-centers in production service, second we store your encrypted data on your local PC when you login, so that if LastPass.com can't be reached, you can still login to the add-on and get to your accounts. The website is usable without the add-on installed (the Encryption and Decryption happens in JavaScript which you can see happen on some forms), but we take advantage of faster encryption available in the add-ons if they're available. We also have a mobile site m.lastpass.com if you're on your phone.

Firewall Leakage Tester   Introducing LeakTest This site has been most well-known for its FREE ShieldsUP! Internet security test. RogueKiller Description RogueKiller is an anti-malware program written in C++ and able to detect and remove generic malwares and some advanced threats such as rootkits, rogues, worms, … Based on generic ways to find malwares by their behaviour (heuristics), on classic anti-malware analysis (signature finding) and on undocumented hacks, RogueKiller can find/remove most of the basic malwares (rogues, trojans, …) and some advanced threats like ZeroAccess or TDSS that behave more like rootkits. RogueKiller is a tiny anti-malware maintained by a small team, and thus new detections are based on “most spread threats“.

Live Webcams - Free, public web cams found online These webcams have been found automatically on the net. For one reason or another these streams are publicly accessible, even when that seems surprising. We do not hack people's passwords. We simply locate cams hiding away in search engines, grab a snapshot, and present them to you here. The snapshots update every few hours. Android Rice /g/uide So, if Android is so modular, why do we need to run a special version of it? The answer lies in just how open Android really is. Android allows OEMs (Phone manufacturers like HTC and Samsung) to personalize it to their own taste, and in most situations, these OEMs lock down the experience to what they want it to be like. Because of this, many community developers band together and create special ROMs (usually referring to an entire picture of an operating system that gets saved to a special area called Read-Only Memory, where they get their name from), which are basically custom versions of Google's AOSP code.