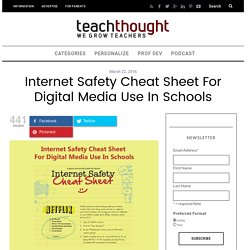 Unfortunately, internet safety is something many teachers–and worse, students-take for granted. While many teachers–and librarians–are concerned with breaking copyright laws, controlling digital media use is often an afterthought. Or worse, so heavily scrutinized that district filters kill any authentic access at all. But as our libraries gradually become virtual spaces, and our media becomes digital, controlling digital media use is going to become increasingly relevant. You can also take a look at 20 basic rules for digital citizenship as a follow-up. Shane Koyczan: "To This Day" ... for the bullied and beautiful. To This Day Project - Shane Koyczan.

News: Five Ways to Stop Bullying and Move Into Action. Cybersecurity: Everyone's Fault. As TNW reported just a short while ago, the Senate’s leading cybersecurity bill failed today, as it did not secure the needed 60-vote majority to beat back a filibuster and pass.

This likely means that no bill will be passed this year, in relation to boosting the nation’s cybersecurity preparedness and prowess. This has a great number of people unhappy. Not only the bill’s named authors, an Independent and a Republican, but the White House, along with other Senators. What follows is the White House’s released statement on the day’s happenings [Formatting: TNW]: Today, despite the strong leadership of Senators Reid, Lieberman, Collins, Rockefeller and Feinstein, an overwhelming majority of Senate Republicans blocked consideration of the Cybersecurity Act of 2012, the only comprehensive piece of cybersecurity legislation that would have begun to address vulnerabilities in the nation’s critical infrastructure systems.

Interestingly, over 200 amendments were filed. 5 ways to teach kids to use technology safely - The Answer Sheet. This was written by Lynette Owens, director of Trend Micro’s Internet Safety for Kids and Families division. 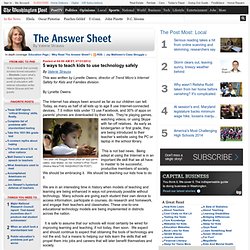 By Lynette Owens The Internet has always been around as far as our children can tell. Today, as many as half of all kids up to age 8 use Internet-connected devices, 7.5 million kids under 13 use Facebook, and 30% of apps on parents’ phones are downloaded by their kids. They’re playing games, Two-year-old Maggie Awad plays an app game called, Icee Maker, on her mother's IPod Touch (Melina Mara/THE WASHINGTON POST) watching videos, or using Skype with far-off relatives. 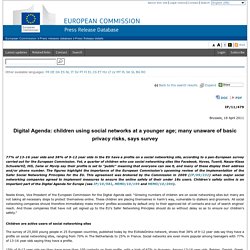 Yet, a quarter of children who use social networking sites like Facebook, Hyves, Tuenti, Nasza-Klasa SchuelerVZ, Hi5, Iwiw or Myvip say their profile is set to "public" meaning that everyone can see it, and many of these display their address and/or phone number. The figures highlight the importance of the European Commission's upcoming review of the implementation of the Safer Social Networking Principles for the EU. This agreement was brokered by the Commission in 2009 (IP/09/232) when major social networking companies agreed to implement measures to ensure the online safety of their under 18s users. Children are active users of social networking sites. Fair use guidelines for educational multimedia. Fair use guidelines for educational multimedia These guidelines were developed during the CONFU process. For a full explanation of their status, see Confu: The conference on fair use. 1. Introduction 2. 3. 4. 5. 6. Appendix A: Organizations Endorsing These Guidelines.