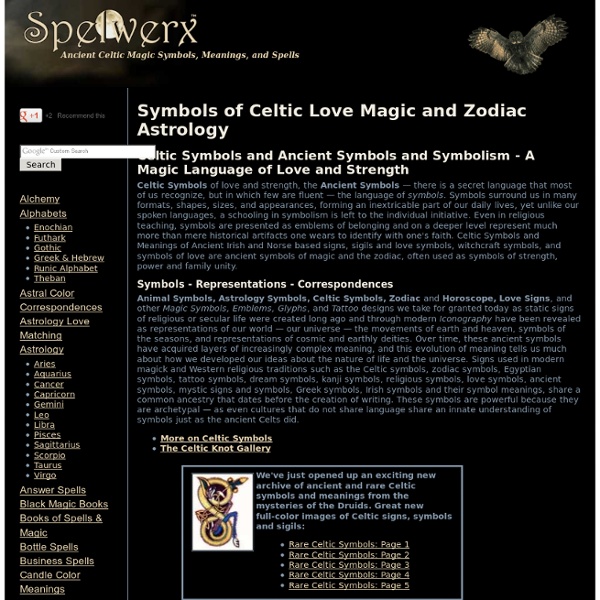 Celtic Symbols of love and strength, the Ancient Symbols — there is a secret language that most of us recognize, but in which few are fluent — the language of symbols. Symbols surround us in many formats, shapes, sizes, and appearances, forming an inextricable part of our daily lives, yet unlike our spoken languages, a schooling in symbolism is left to the individual initiative. Even in religious teaching, symbols are presented as emblems of belonging and on a deeper level represent much more than mere historical artifacts one wears to identify with one's faith. Celtic Symbols and Meanings of Ancient Irish and Norse based signs, sigils and love symbols, witchcraft symbols, and symbols of love are ancient symbols of magic and the zodiac, often used as symbols of strength, power and family unity. Symbols - Representations - Correspondences Symbols of Magick and Astrology The Sigil, Sigils, Siglia, or Sigla Magic symbols are often referred to as sigils. The Goat of Mendes Air Alchemy Angel Ankh

Runes Runes are an alphabetic script used by the peoples of Northern Europe from the first century C.E. until well into the Middle Ages. In addition to their use as a written alphabet, the runes also were a system of symbols used for magic and divination. Runes are loaded with power. I use them in spellworking, usually etched on a candle. In fact, inscribing candles with runes is a common magickal practice. I also draw them in different places -- on my car for safety in travel, on the doorpost of my home for protection, on flower pots to aid in the growth of plants. Runes are a complex system steeped in legend, myth, and mystery. FEHU (Feoh) -- attracts wealth, initiates prosperous enterprises, brings motivation and activity, circulates abundance and life-force, and invokes the fire of the heavenly bodies. URUZ (UR) -- enhances strength, removes weaknesses and self-doubt, and draws earth and oak-strength into the personal sphere. RAIDHO (Rad) -- the rune of ritual and astral travel.

The 11 Most Beautiful Mathematical Equations | Beauty of Math Mathematical equations aren't just useful — many are quite beautiful. And many scientists admit they are often fond of particular formulas not just for their function, but for their form, and the simple, poetic truths they contain. While certain famous equations, such as Albert Einstein's E = mc^2, hog most of the public glory, many less familiar formulas have their champions among scientists. LiveScience asked physicists, astronomers and mathematicians for their favorite equations; here's what we found: General relativity The equation above was formulated by Einstein as part of his groundbreaking general theory of relativity in 1915. "It is still amazing to me that one such mathematical equation can describe what space-time is all about," said Space Telescope Science Institute astrophysicist Mario Livio, who nominated the equation as his favorite. Standard model The standard model theory has not yet, however, been united with general relativity, which is why it cannot describe gravity.

symboldictionary.net Carl Jung Carl Gustav Jung (/jʊŋ/; German: [ˈkarl ˈɡʊstaf jʊŋ]; 26 July 1875 – 6 June 1961), often referred to as C. G. Jung, was a Swiss psychiatrist and psychotherapist who founded analytical psychology.[2] Jung proposed and developed the concepts of the collective unconscious, archetypes, and extraversion and introversion. His work has been influential not only in psychiatry but also in philosophy, anthropology, archeology, literature, and religious studies. He was a prolific writer, though many of his works were not published until after his death. The central concept of analytical psychology is individuation—the psychological process of integrating the opposites, including the conscious with the unconscious, while still maintaining their relative autonomy.[3] Jung considered individuation to be the central process of human development.[4] Early years[edit] Childhood family[edit] Jung's mother left Laufen for several months of hospitalization near Basel for an unknown physical ailment.

Best of the Web: Astrology, Occult & Paranormal Websites Foods Before Working Out: 10 Carbs To Eat Before And Post-Workout Exercising on an empty stomach never quite feels right. When it comes to helping our bodies feel good before and after workouts, most of us would agree we should start with a healthy plate of food. “Carbohydrates are the primary and most important source of energy for the body,” says Liz Pearson, author of Broccoli, Love and Dark Chocolate (coming in Spring 2013) said in a press release. “Many people today have developed a phobia of carbs, but the truth is that carbs are actually good for us and we need to consume them every day, particularly when we’re active.” While many do skip out on carbs or try low-carb diets, Dietitians of Canada recommends people -- working out or not -- should never skip breakfast, but instead, should try controlling portions and eating high-carb veggies and fruits that also contain rich nutrients and minerals. But there are bad carbs to watch out for. But some studies have shown that opting for heavy carbs before workouts can actually do more harm than good.