In addition to being the foremost online destination for information about the supernatural, unusual phenomena and the occult, Occultopedia also features a variety of resources for the pagan community, new age buffs, unexplained phenomena enthusiasts, curious minds, and skeptics as well.Occultopedia is the genuine article, the original and the best internet index of the extraordinary and uncanny, shamelessly copied by many, but never equaled. Online since 1995 — at first in a free web space provider, and in 1997 finally with its own domain name and hosting — Occultopedia still is the principal online resource for those looking for the unexplained, the curious and the unusual.

Occultopedia is a work in progress, and is not completed. Esoteric. Other books of info. Chakra. International Guild of Occult Sciences. SYMBOLS - Celtic Symbols and Meanings - Love Symbols and Zodiac Signs for Ancient Witchcraft Magic. Celtic Symbols of love and strength, the Ancient Symbols — there is a secret language that most of us recognize, but in which few are fluent — the language of symbols. 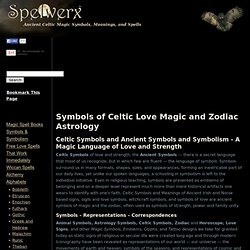 Symbols surround us in many formats, shapes, sizes, and appearances, forming an inextricable part of our daily lives, yet unlike our spoken languages, a schooling in symbolism is left to the individual initiative. Even in religious teaching, symbols are presented as emblems of belonging and on a deeper level represent much more than mere historical artifacts one wears to identify with one's faith. Occult Underground - Portal to Esoteric Knowledge. Occult Rituals as practice by those who follow the right hand path, I leave it to you to form your own opinion's. Encyclopedia Mythica. 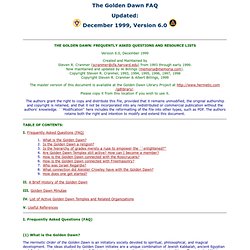 Cranmer (scranmer@cfa.harvard.edu) from 1993 through early 1999. Now maintained and updated by Al Billings (memoria@memoria.com). Copyright Steven R. Cranmer, 1993, 1994, 1995, 1996, 1997, 1998 Copyright Steven R. The master version of this document is available at the Golden Dawn Library Project at Please copy it from this location if you wish to use it. What are you most powerful occult rituals? Esoteric Archives. 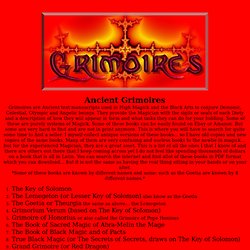 They provide the Magician with the sigils or seals of each Diety and a description of how they will appear in form and what tasks they can do for your bidding. Some of these are purely systems of Magick. Some of these books can be easily found on Ebay or Amazon. But some are very hard to find and are not in print anymore. This is where you will have to search for quite some time to find a seller. Enochian Magick Reference Document. Back Home Table of Contents Note: Due to their large size, the illustrations for this document are on separate linked pages. 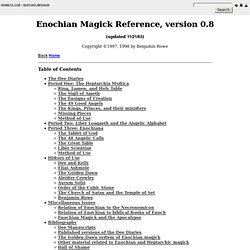 Thanks to Scott M. for the scans he provided. Thanks to Clay Holden and the John Dee Publication Project for cleaned-up scans from Dee's diaries. Thanks also to the many people who made suggestions, whether or not I used them, and to the people who had constructive criticisms of early versions. The Dee Diaries The systems of magick now known as Enochian magick derive from the work of the Elizabethan scholar Dr. The method employed for these works was fairly standard for the time. Dee made multiple copies of these records. In later years, Dee apparently decided to conceal his magickal records in a hidden compartment of a large cedar chest he possessed.

Occult Underground - Portal to Esoteric Knowledge. Grimoires. Famous Occult Grimoire Translator – International Guild of Occult Sciences – IGOS. White Dragon Society. March222014 Putin runs the EU and owns Germany It is interesting that Europe lets a county that less than 60 years ago murdered 10 Million of its own people and 30 million other Europeans and Americans. 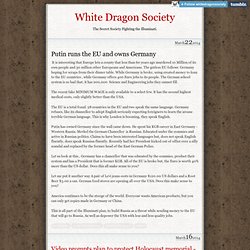 The gutless EU follows Germany hoping for scraps from their dinner table. While Germany is broke, using created money to loan to the EU countries , while Germany offers 400 Euro jobs to its people. The German school system is so bad that, it has 200,000 Science and Engineering jobs they cannot fill. The recent fake MINIMUM WAGE is only available to a select few.

The EU is a total fraud. 28 countries in the EU and two speak the same language. Putin has owned Germany since the wall came down. Let us look at this.. Let me put it another way A pair of Levi jeans costs in Germany $120.00 US dollars and a Root Beer $3.00 a can. Free Metaphysical Books -The Free Esoteric Library - Home. Eso Wikis. Spiritual Videos. Witchy Stuff. Divination. Metaphysics.