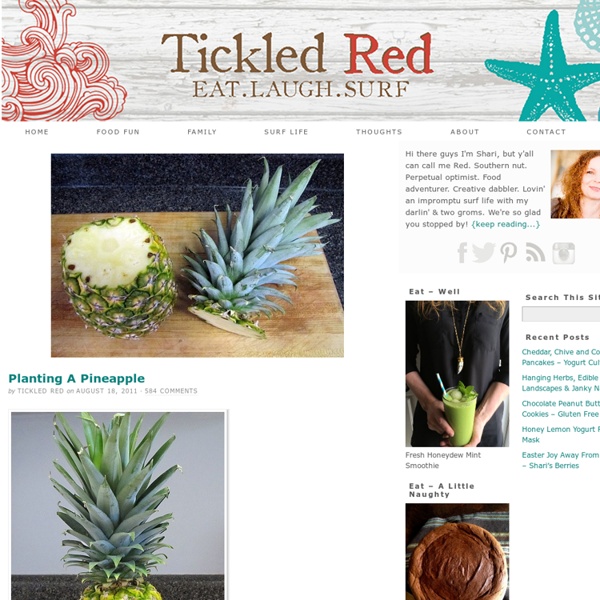 Did y’all know that you can take this and turn it into… This? And that this will eventually produce… This? Yes, I’m talking about turning your average, ordinary grocery store pineapple into a tropical showpiece within your home. A plant that is not only impressive but will WOW! Planting a Pineapple 1. 2. 3. In 24 months (sounds better than two years) it will look like this. You will have an actual, large, utterly delicious pineapple in 24-36 months. The thought of growing my own pineapple always makes me smile and giggle just a little bit. Now what am I supposed to do with all of this leftover pineapple? I see something sweet coming soon. While you’re waiting for me to make something yummy with the leftovers, go ahead and plant a pineapple. Be adventurous plant a pineapple. Hugs, Tickled Red *Please bear in mind that I am not a hortoculturist. Tagged as: Gardening, Pineapple, Tropical Fruit

floral still life photography Bas Meeuws (1974) is a passionate photographer who has given a new twist to the traditional Dutch still life with flowers. Meeuws does not paint his flowers with a brush and oil paints, as his famous predecessors from the 17th century did. His images come from a digital reflex camera. Painstakingly and with great ingenuity Meeuws processes his pictures of flowers until he has created exactly the right image. The result is a series of unique and layered works of art. Green Terrarium - A clear glass jar, vase, bowl, glass, or whatever interesting glass container you have on hand - Rocks, pebbles or recycled glass chunks - Activated charcoal (sometimes called activated carbon) - Potting soil appropriate for your plants - Moss (optional) - Figurines, sticks or decorative items (optional) - Various small plants - A scoop, spoon or shovel - Scissors - Gloves Source your containers from a thrift store or an antique store or scrounge around your house for an old jar. Even simple jelly jars or canning jars can make beautiful terrariums. They can be open or closed – it’s totally up to you. Everything else can be bought at your local gardening center.

December 2007 How to get on a bus: idiot's guide publishedBy Sophie Borland An idiot’s guide explaining how to get on and off a bus has been produced for people who have a phobia of public transport. Bryony Gordon: Only an idiot would take the bus According to Stagecoach, which has created the step-by-step manual, a large proportion of Britain’s population are now so used to travelling by car that they have become scared of buses. Download Stagecoach's guideIn order to encourage use of public transport, the firm has come up with the “Using the Bus” guide which sets out the most basic information possible. The guide begins reassuringly with: “Using the bus could not be easier.” The Rise of Urban Farming and Other Varieties of Sustainable Ag My newest buzzword for 2011 is CSA. I'd never heard the term until recently, but now it seems to be popping up all over, as is interest in sustainable agriculture and urban farming. CSA stands for Community Supported Agriculture -- the practice of signing up with a local farm for weekly produce and, in some cases, meat and dairy. I first read about CSA in Kristin Kimball's recent memoir, "The Dirty Life," which is justly attracting rave reviews on Amazon. A Manhattan writer who gave up the city for love, she has been farming an organic spread, Essex Farm, in upstate New York since 2003, with her husband, Mark.

Flowers blown apart Time After Time & Blow Up [2007] The large-scale photographs entitled Blow Up depict elaborate floral arrangements, based upon a 19th Century still-life painting by Henri Fantin-Latour, captured in the moment of exploding. Gersht´s compositions are literally frozen in motion, a process dependent on the ability of the advanced technology of photography to freeze-frame action. This visual occurrence, that is too fast for the human eye to process and can only be perceived with the aid of photography, is what Walter Benjamin called the ‘optical unconsciousness’ in his seminal essay ‘A Short History of Photography’.

Cactus Garden Idea This one is a nice DIY project which will show you how to plant a simple cactus garden. Plants are always a great idea when it comes to decorating your home so why not making a project with them? Just take a simple circle-shaped vase (make sure that it is a shallower one). 100 legal sites to stream and download free music Music is life, I never found anyone who’s life isn’t influenced by Music. Why the best things in life like Music are not free? Actually, there is more legally available for free Music than you think.

Bob Vila : Trusted Home Renovation & Repair Expert Photo: shutterstock.com Laying mulch before the winter gives your soil a head start for the next growing season. It also protects delicate plants, adding the equivalent of a whole zone level to those that might not be hardy enough for the area. Kristin Schleiter, the acting Director of Outdoor Gardens at the New York Botanical Garden, shares some tips to make the most of mulch. "sunrise through nature`s eyes" Random photo Submit your photo Stumble Thru