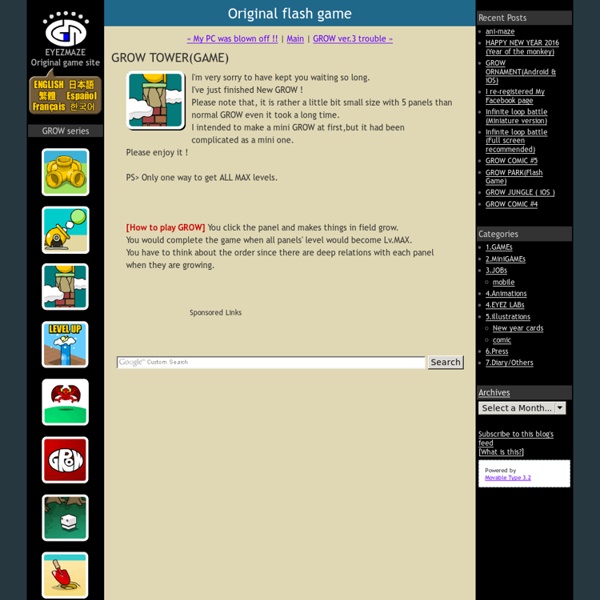 Grow Cannon - Lambda : des jeux sympas et leurs solutions 31 janvier 2011 1 31 /01 /janvier /2011 00:00 Toujours très attendu par les amateurs du genre, voici la toute dernière création de chez Eyezmaze (le créateur de la série Grow) : Grow Cannon. Il s'agit d'un petit jeu point and click en flash assez original et différent des autres épisodes de la série. Pas de fin bonus cachée cette fois-ci? Du même auteur : Grow Valley, Transform, Grow Tower, Meet In Ver.0, Grow nano vol.3, Grow island, Dwarf Complete Ver.1, Galve's Adventure, Grow Ornament, Chronon, Grow ver. 1.0 et Grow ver 2.0. Partager cet article Publié par Lambda - dans Divers Says-It.com My 107.9 chronon ver.0 Flash Game___EYEZMAZE I managed to release [Chronon ver.0] Ah~ I confess to messing up on this time. Even though it took so much time to prgram it, it is still unsatisfactory performance. I think it is difficult and complicated to play it based on intuition, that's against EYEZMAZE philosophy. Well, I had better to explain it. For example, first,[put the pan from the wall onto the desk at 12:25], then as far back as 6:15[put the pan into the fireplace]. after that, the pan placed in the fireplace, not the wall. haah... Next game, I decide to make better one in less time. I add some tips last. First, set out to open the treasure box. Second, after the treasure box open,then try to hatch the egg under the desk. The purpose of this game is to let the little yellow dwarf out of a center cage. but it doesn't mean the perfect ending. It is very hard to finish this game perfectly, why don't you trade tips on some kinds of communities.

The magic button — Make Everything OK FRIV! Grow RPG - Walkthrough, Tips, Review Another one of my favorite games gets an update! Oh happy day! =) Grow has to be one of the best Flash games ever. I have been checking the site often since first discovering the game over a year ago, hoping for an update. Grow RPG takes the classic formula that made the original so compelling to play, and adds additional RPG-like elements, such as enemy combat, a shop to buy health and weapons, and even a dungeon with hidden treasure. The game is played exactly as before: Simply drag the items onto the large green "GROW" sphere. I haven't yet seen everything to this game, though I didn't want to wait to post it for anyone else who might be as giddy as I am to learn of this new Grow game. Update: Just finished it, and I must say that I enjoyed the additional elements that make this Grow game more meaningful than the previous one. Another excellent game design by ON of Eyezmaze. Still want more Grow?

Grow (ver. 3) Remake - Walkthrough, Tips, Review A while ago, On of Eyezmaze announced on his blog that he had lost the files for his original Grow game due to a failed hard drive (reviewed here way back in 2004). But he was able to recover some of his work from the original SWF files, and decided to do more than fix a Flash Player versioning issue with it: He added a new ending (there are now 2!) and a hint button as well. The result is Grow (ver. 3) Remake. Simply drag the item icons, one at a time, onto the big red sphere. This first release for the Grow series is a little more difficult than the others that came afterward. The new 2nd ending is so radically different and so extensively animated that it provides a compelling reason to relive this awesome little game once again! Play Grow (ver. 3) Remake You can still Play the original Grow (ver. 3) with the Flash Player versioning bug fixed, too. Still want more Grow?