10 Most Useful Medicinal Plants For Your Garden 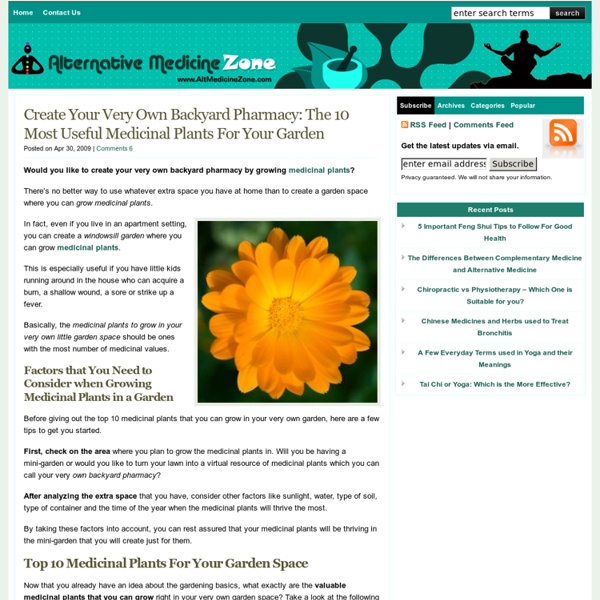 The List Blog 10. Charles Bonnet Syndrome Charles Bonnet syndrome is a condition that causes patients with visual lossto have complex visual hallucinations. It was first described by CharlesBonnet in 1760 and was incorporated into English-speaking psychiatry in1982. Most of the people afflicted with Charles Bonnet Syndrome areindividuals who are in the early stages of sight loss, and the hallucinationsusually begin while the person’s vision is slowly diminishing. The mostcommon culprit is macular degeneration, a disease where certain light-sensing cells in the retina malfunction and cause a slowly worsening blindspot in the center of one’s vision.People who have Charles Bonnet syndrome often see vivid yet unrealimages. Sufferers understand that the hallucinations are not real. 9. Hexakosioihexekontahexaphobia is literally defined as the "fear of thenumber six hundred sixty-six (666).” 8. 7. 6. 5. 4. A similar condition is Fregoli delusion. 3. 2. 1. One More Target Fixation

18 of Nature’s Most Powerful Medicinal Plants (Part of an Exclusive WebEcoist Series on Amazing Trees, Plants, Forests and Flowers) From marijuana to catnip, there are hundreds of remarkably common herbs, flowers, berries and plants that serve all kinds of important medicinal and health purposes that might surprise you: anti-inflammatory, anti-fungal, insect repellent, antiseptic, expectorant, antibacterial, detoxification, fever reduction, antihistamine and pain relief. Here are eighteen potent medical plants you're likely to find in the wild – or even someone's backyard – that can help with minor injuries, scrapes, bites and pains Marijuana Images via Current and Street Knowledge Seriously. Lady Ferns Image via US Forest Service If you grew up in the Pacific Northwest you likely know what ferns are good for: treating stinging nettles. California Poppy Images via Netstate and Mountain Meadow Seeds The brilliant blooms of the poppy make this opioid plant an iconic one. Blood Flower Tansy Image via Earth Heart Farm Korean Mint (hyssop) Alfalfa

Maintain a Hydroponic Nutrient Reservoir Edit Article Edited by Jason Willkomm, Ben Rubenstein, Sondra C, Kent Smith and 15 others A solid foundation for maintaining your hydroponic nutrient solution reservoir! A reservoir forms the center of every single type of hydroponic growing system. These basics give you effective control over every system type. Ad Steps 1These notes are for a wide range of vegetables used for human consumption.. 13Hydroponic gardens grow better outside, but local weather conditions may affect it and should be taken into account. Tips Oxygenation of the nutrient solution is paramount for nutrient uptake. Warnings Some city's water that contain chlorine also contains bromine which may harm your plants, a way to get rid of this bromine is to fill a barrel (not your reservoir) with cold water, the next day you will notice that the walls of the barrel will have little bubbles sticking allover, just tap your barrels sides a few times until all of these bubbles float up to the top.

Gene for Left-Handed Trait Discovered August 1, 2007 The gene most closely linked to left-handedness has been found, experts announced this week. The gene, called LRRTM1, is also associated with a slight increase in developing certain mental illnesses such as schizophrenia. Clyde Francks is lead author of a new study on the gene and a visiting fellow at the Wellcome Trust Centre for Human Genetics at Oxford University. For right-handed people, he said, the right side of the brain usually controls emotion, while the left side of the brain tends to control speech and language. (Related: "First Ever Brain 'Atlas' Completed" [September 26, 2006].) In left-handers—about 10 percent of the world's population—the pattern is usually reversed. "We think that this gene affects the symmetry of the brain," Francks said. Brain asymmetry is also a factor in schizophrenia, a mental disorder that affects about one in a hundred people worldwide and results in impaired perception and severe behavioral changes. Finding Symmetry

Small Urban Space Rain Gardens Rain gardens aren’t just for homeowners with large tracts of land. A rain garden planted in a small urban area can make a big difference in the water quality and environment of its surrounding area. When it rains in densely populated urban areas, impervious surfaces such as roads, sidewalks, and roofs not planted with gardens, trees, or turf, produce runoff that goes straight into storm sewers. Some storm drains carry water to treatment plants, while water from other storm drains washes directly into lakes, rivers, and oceans. Any time a large influx of water pours into an aquatic ecosystem, the balance of oxygen and nutrients is disturbed, causing death to aquatic life, and other disruptions of the ecosystem. Photo, City of Kingston, Melbourne, Australia In addition to impervious surfaces made of concrete or asphalt, many urban areas have vacant, muddy lots. Planting a rain garden, even a small one, can help divert water and keep it within the aquifer and out of streams and lakes.

Health | Left-handers 'think' more quickly Left-handed people can think quicker when carrying out tasks such as playing computer games or playing sport, say Australian researchers. Connections between the left and right hand sides or hemispheres of the brain are faster in left-handed people, a study in Neuropsychology shows. The fast transfer of information in the brain makes left-handers more efficient when dealing with multiple stimuli. Experts said left-handers tended to use both sides of the brain more easily. Study leader Dr Nick Cherbuin from the Australian National University measured transfer time between the two sides of the brain by measuring reaction times to white dots flashed to the left and right of a fixed cross. He then compared this with how good participants were at carrying out a task to spot matching letters in the left and right visual fields, which would require them to use both sides of the brain at the same time. More efficient "It's certainly very interesting.

The Rise of Urban Farming and Other Varieties of Sustainable Ag | Buildings My newest buzzword for 2011 is CSA. I'd never heard the term until recently, but now it seems to be popping up all over, as is interest in sustainable agriculture and urban farming. CSA stands for Community Supported Agriculture -- the practice of signing up with a local farm for weekly produce and, in some cases, meat and dairy. Kimball's book is an engrossing depiction of the back-breaking work and edible rewards of CSA. Urban farming is also on the rise. Urban farming comes in a variety of models. A vision of urban and vertical farming. Next Page: More visions of urban farms.

Fritzing Health | Preferred hand 'set in the womb' The hand you prefer to use as a 10-week-old foetus is the hand you will favour for the rest of your life, research suggests. A team from Belfast's Queen's University studied foetuses in the womb, and after birth. Their findings challenge the widely held view that a child does not develop left or right-handedness until it is at least three years old. The research is reported by New Scientist magazine. In one part of their study, the Belfast team identified 60 foetuses who sucked their right thumb in the womb, and 15 who sucked their left thumb. When the babies were examined again between the ages of 10 and 12, the researchers found all 60 of the right thumb suckers were now right-handed. Two-thirds of the left thumb suckers were left handed, the rest apparently having switched their dominant hand. They also produced evidence suggesting foetuses begin to favour one hand over another at an even earlier stage. The Belfast team found the majority tend to wave their right arm more than their left.

Top 10 Natural, Eco-Friendly and Anti-Pollutant Houseplants | The New Ecologist – Get rid of indoor pollution in a natural way You must have spent practically thousands of dollars to buy the latest vacuum cleaner and the latest floor cleaners that help you keep your house clean. However, there comes a time when these machines fail to work leaving you to the unhealthy dust particles and other pollutants in your house. Rather than artificial machines, you must opt for natural pollution fighters that come in the form of plants. These plants are quiet unlike the noisy machines when you switch them off. Moreover, you do not have to throw hundreds of dollars to repair them. Hence, to get rid of pollution in your house in a natural way, you must go through the top 10 houseplants that you can buy. 1.The Feston Rose plant ( photo by missouristate ) While looking for a houseplant, you generally prefer the one’s that need the lowest maintenance. This houseplant brilliantly tolerates highly saline conditions, lack of water, scorching heat and billowing winds. 2. 3.Phalaenopsis 4.

Health | Left-handers 'better in fights' If you find yourself in a fight, you'd better hope it's not against a left-hander - scientists have found they often have the upper hand. Opponents simply do not expect a left-hook. The endurance of left-handedness has puzzled researchers, because it is linked to disadvantages including an increased risk of some diseases. But University of Montpellier experts, writing in Proceedings B, say it could be because they do well in combat. The team saw that left-handers had the advantage in sports such as fencing, tennis and baseball. They said that Western interactive sports such as these can be classed as "special cases of fights - with strict rules, including the "prohibition of killing and intentionally wounding the opponent". This led them to speculate the same advantage may persist in more aggressive contexts, such as war, so societies which are more violent would have a higher frequency of left-handers. Skill range "And I think the answer is 'no it doesn't'.

Urban Gardening: Indoor and Balcony Gardening Tips Posted on Nov 19, 2010 in DIY Projects , Emergency Preparedness & Survival , Urban Gardening, Farming & Homesteading It’s quite feasible to grow your own food even if you live in an urban space and have no outdoor room to garden. If you have just a bit of space on a balcony, patio or rooftop, you can grow even more. Gardening inside presents unique challenges. Supplies: where to find, how to have them shipped Space: small apartments aren’t conducive to traditional fruit-tree growing techniques Light: light levels are drastically reduced on the inside Crops: which will produce in shadier conditions Pollination: certain fruit crops require pollination (generally done by insects) in order to produce There are ways to get around all of these issues. The Internet has made getting supplies much easier. There are lots of things you can grow that are healthy, nutritious, and require relatively little space. Sprouting is one way to grow a lot of food in a little bit of space. Lettuce Peas Bush beans Kale