The Rise of Urban Farming and Other Varieties of Sustainable Ag 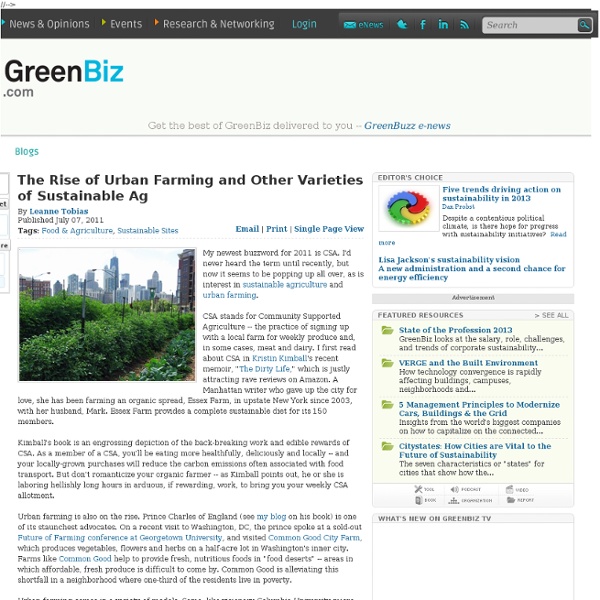 My newest buzzword for 2011 is CSA. I'd never heard the term until recently, but now it seems to be popping up all over, as is interest in sustainable agriculture and urban farming. CSA stands for Community Supported Agriculture -- the practice of signing up with a local farm for weekly produce and, in some cases, meat and dairy. I first read about CSA in Kristin Kimball's recent memoir, "The Dirty Life," which is justly attracting rave reviews on Amazon. A Manhattan writer who gave up the city for love, she has been farming an organic spread, Essex Farm, in upstate New York since 2003, with her husband, Mark. Essex Farm provides a complete sustainable diet for its 150 members. Kimball's book is an engrossing depiction of the back-breaking work and edible rewards of CSA. Urban farming is also on the rise. Urban farming comes in a variety of models. A vision of urban and vertical farming. Next Page: More visions of urban farms.

Planting A Pineapple Did y’all know that you can take this and turn it into… This? And that this will eventually produce… This? Yes, I’m talking about turning your average, ordinary grocery store pineapple into a tropical showpiece within your home. Studio G - Garden Design & Landscape Design inspiration » 2009 » February Spring is coming and wedding season will soon be in full swing. I am sensing a trend in this era of cost cutting and economizing that garden weddings (perhaps at cherished family home) are a realistic option for brides. I have had a couple of clients speak with me about developing thier gardens for upcoming events so I thought I would share some ideas for creating a wedding garden.

Bob Vila : Trusted Home Renovation & Repair Expert Photo: shutterstock.com Laying mulch before the winter gives your soil a head start for the next growing season. It also protects delicate plants, adding the equivalent of a whole zone level to those that might not be hardy enough for the area. Kristin Schleiter, the acting Director of Outdoor Gardens at the New York Botanical Garden, shares some tips to make the most of mulch. When choosing the type you want to lay in your garden, avoid mulch made of raw wood (because it robs the soil of the nitrogen plants require) and any that are artificially dyed (since they add extra chemicals to the garden). Photo: arborday.org

5 Easy to Grow Mosquito-Repelling Plants As the outdoor season approaches, many homeowners and outdoor enthusiasts look for ways to control mosquitoes. With all the publicity about the West Nile virus, mosquito repelling products are gaining in popularity. But many commercial insect repellents contain from 5% to 25% DEET. There are concerns about the potential toxic effects of DEET, especially when used by children. Children who absorb high amounts of DEET through insect repellents have developed seizures, slurred speech, hypotension and bradycardia. There are new DEET-free mosquito repellents on the market today which offer some relief to those venturing outdoors in mosquito season.

The Sexiest Men in Rock & Roll - A Scientific Study - Beth Mann "You want this." Some think sexiness is in the eye of the beholder. But is it? Here at Silly Lists of Nothingness, we say its an exacting science that can be proved in labs with women in white coats using complex formulas that are beyond you, so don't worry pretty little head. Ordnance Survey Blog » Dry stone walling for dummies Today we have a guest blog from Chris James of Fix the Fells / Nurture Lakeland. Chris decided to lend a hand to the dry stone walling teamIt was my first attempt at the black art of dry stone walling. Piling rocks on top of each other to build walls. No cement, nothing to bind them except the weight of the rocks and the skill of the waller in linking the intricate shaped rocks into infinite combinations; a 3d jigsaw stretching miles into the distance.I was spending a morning with a team working for the Fix the Fells project. A charitable organisation which works to repair and maintain upland paths across the Lake District with funding from donations, partners and the Heritage Lottery Fund. Visit their website at www.fixthefells.co.uk to see what they’re up to.The sun was out in the Lake District and from our wall above the National Trust Basecamp at High Wray we had a stunning view of Windermere and town of Ambleside.

Urban Vertical Garden Built From Hundreds of Recycled Soda Bottles As part of an innovative partnership called Home Sweet Home (Lar Doce Lar) between multidisciplinary design firm Rosenbaum and TV producer Luciano Huck, the teams went through dozens of Brazilian homes doing dramatic makeovers of interior and exterior spaces. On their 48th home Rosenbaum designed a pretty amazing vertical garden that was suspended in a narrow walkway just outside the house. Reponse to the garden was so huge the firm quickly released design schematics (in Portugese) detailing how to build one. A huge thanks to the team at Rosenbaum for sharing these photos with Colossal!