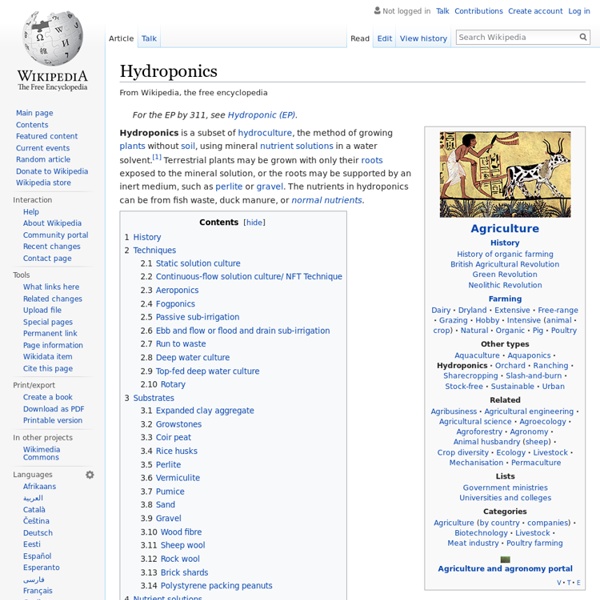 NASA researcher checking hydroponic onions with Bibb lettuce to his left and radishes to the right Hydroponics is a subset of hydroculture, the method of growing plants without soil, using mineral nutrient solutions in a water solvent.[1] Terrestrial plants may be grown with only their roots exposed to the mineral solution, or the roots may be supported by an inert medium, such as perlite or gravel. The nutrients in hydroponics can be from fish waste, duck manure, or normal nutrients. History[edit] In 1929, William Frederick Gericke of the University of California at Berkeley began publicly promoting that solution culture be used for agricultural crop production.[3][4] He first termed it aquaculture but later found that aquaculture was already applied to culture of aquatic organisms. Reports of Gericke's work and his claims that hydroponics would revolutionize plant agriculture prompted a huge number of requests for further information. Techniques[edit] Static solution culture[edit]

Plant nutrition Plant nutrition is the study of the chemical elements and compounds necessary for plant growth, plant metabolism and their external supply. In 1972, Emanuel Epstein defined two criteria for an element to be essential for plant growth: in its absence the plant is unable to complete a normal life cycle.or that the element is part of some essential plant constituent or metabolite. This is in accordance with Justus von Liebig's law of the minimum.[1] The essential plant nutrients include carbon, oxygen and hydrogen which are absorbed from the air, whereas other nutrients including nitrogen are typically obtained from the soil (exceptions include some parasitic or carnivorous plants). There are 16 most important nutrients for plants. Plants must obtain the following mineral nutrients from their growing medium:[2]

Progressive Plant Growing is a Blooming Business Progressive Plant Growing is a Blooming Business Soil. Water. Say that plants don't need them and people may think you've traded your cow -- and your good sense -- for a handful of beans. But NASA-sponsored plant experiments prove that you don't need soil and lots of water to grow a beanstalk that would make Jack proud. Plants have been to space since 1960, but NASA's plant growth experiments began in earnest during the 1990s. Water Pump for an Aeroponic System by Greg (VA) Just about to start my own garden....I am looking at water pumps and cannot decide which one to get. None of them say anything about psi on it, just HP or another unit of measurement. Which pump did you get and where if you do not mind. Your site is incredibly helpful, thank you so much! Answer: Greg- the hydroponic system I use is a low pressure system and has a low pressure pump.

Building the Simplest Possible pH Meter How the pH Meter Works You can build a simple digital pH meter with just an inexpensive operational amplifier ("op amp") IC (a TL082 Dual JFET-input IC, about $2.00), 2 batteries, a digital volt meter, and a pH probe (mine's a Pinpoint brand probe that I got from Amazon.com for about $40).The TL082 (or any other operational amplifier with a high impedance input) works as a unity gain buffer between the high impedance of the pH probe and the digital multimeter. Schematic Diagram of the pH Meter Here's the simple schematic diagram of the pH meter circuit. Two 9-volt batteries power a high-input-impedance operational amplifier, such as a TL082. The pH probe of the meter is connected to the non-inverting input. The output voltage (V out), which is directly proportional to pH, is read with a voltmeter.

Calibrating and Care of a pH Meter  pH meters work by sampling the concentration of hydrogen ions in a solution with a probe that has a delicate tip made of very thin glass. To get accurate measurements, this probe must be treated gently and be carefully and regularly cleaned and calibrated. The best advice is to follow the manufacturer’s instructions for your meter, but here are some general recommendations. Cleaning: The best way to clean the tip of a pH meter is not to let it get dirty in the first place. Probes that are left immersed in solution should be shielded from light to prevent the growth of algae and placed in the cleanest part of the solution that is still representative of the overall pH. Calibrating: Here is a typical calibration procedure:

Controlled-environment agriculture Controlled-environment agriculture (CEA) is a technology-based approach toward food production. The aim of CEA is to provide protection and maintain optimal growing conditions throughout the development of the crop. Production takes place within an enclosed growing structure such as a greenhouse or building. Plants are often grown using hydroponic methods in order to supply the proper amounts of water and nutrients to the root zone. NOLA Gets First Aeroponic Urban Farm Louisiana-based Aquaponic Modular Production Systems , an urban agriculture development company, just announced the debut of a project — the first aeroponic farm in New Orleans. The Tower Garden is hosted by Hollygrove Farm and Market to showcase an innovative, fast, and eco-friendly way to grow fresh produce for the community. The design is a closed-loop system that uses nutrient-enriched water, not soil, to grow food. The recirculating farm has no water runoff and is expected to yield upwards of 40 pounds of greens per week, according to a statement by AMPS. AMPS says The Tower Garden can “ efficiently capture and repurpose waste, recycle water to reduce consumption, and grow food virtually anywhere – indoors or outside and in oddly shaped spaces. “ It’s made with food-safe plastic suitable for outdoor use and allows 44 plants to grow in five square feet.

EcoPlus Submersible Water Pumps Read Answers for EcoPlus Submersible Water Pumps Do you know how many watts these particular pumps will draw? -CJ We just added all the wattages to the product page for the EcoPlus water pumps. -Greners Staff My Indoor DWC Hydroponics System To the naked or untrained eye, plants can appear as very simple and boring forms of life. In reality, plants are very complex creatures. In fact, genetically speaking plants are about twice as complex as humans. They exist in two very separate yet two very interconnected and equally important worlds.