Chronon ver.0 Flash Game___EYEZMAZE. I managed to release [Chronon ver.0] Ah~ I confess to messing up on this time. 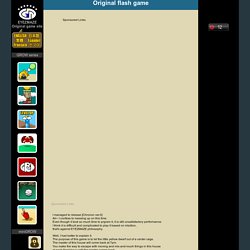 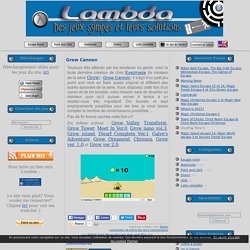 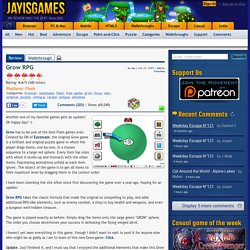 Oh happy day! =) Grow has to be one of the best Flash games ever. Created by ON of Eyezmaze, the original Grow game is a brilliant and original puzzle game in which the player drags items, one-by-one, in a chosen sequence to a large red sphere. Every item has rules with which it levels-up and interacts with the other items. I have been checking the site often since first discovering the game over a year ago, hoping for an update. Grow RPG takes the classic formula that made the original so compelling to play, and adds additional RPG-like elements, such as enemy combat, a shop to buy health and weapons, and even a dungeon with hidden treasure. The game is played exactly as before: Simply drag the items onto the large green "GROW" sphere. I haven't yet seen everything to this game, though I didn't want to wait to post it for anyone else who might be as giddy as I am to learn of this new Grow game. 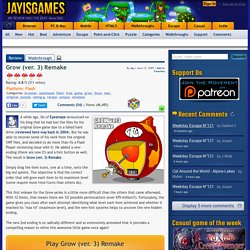 But he was able to recover some of his work from the original SWF files, and decided to do more than fix a Flash Player versioning issue with it: He added a new ending (there are now 2!) And a hint button as well. The result is Grow (ver. 3) Remake. Simply drag the item icons, one at a time, onto the big red sphere. The objective is find the correct order that will grow each item to its maximum level (some require more time/turns than others do). This first release for the Grow series is a little more difficult than the others that came afterward. The new 2nd ending is so radically different and so extensively animated that it provides a compelling reason to relive this awesome little game once again! Play Grow (ver. 3) Remake You can still. Play Grow Valley, a Free online game on Jay is games. Grow ver.2 - Walkthrough, Tips, Review.