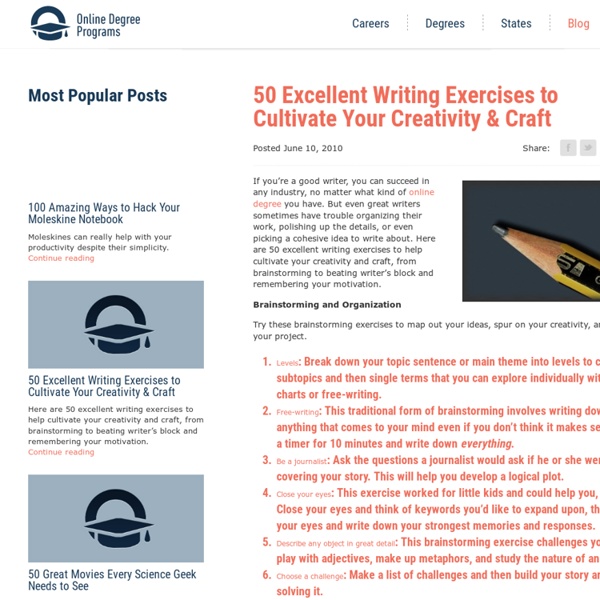 If you’re a good writer, you can succeed in any industry, no matter what kind of online degree you have. But even great writers sometimes have trouble organizing their work, polishing up the details, or even picking a cohesive idea to write about. Here are 50 excellent writing exercises to help cultivate your creativity and craft, from brainstorming to beating writer’s block and remembering your motivation. Brainstorming and Organization Try these brainstorming exercises to map out your ideas, spur on your creativity, and plan your project. Levels: Break down your topic sentence or main theme into levels to create subtopics and then single terms that you can explore individually with lists, charts or free-writing.Free-writing: This traditional form of brainstorming involves writing down anything that comes to your mind even if you don’t think it makes sense. Writer’s Block Use prompts: Print out and then cut up these prompts to store in a writer’s block box. Games Language and Grammar Style Related:  Writter's Destination

50 Most Challenging Words | Just English Back in 2010 The New York Times published a list of 50 fancy words that most frequently stump their readership. The New York Times 50 Fancy Words (defined and used) 1. I am glad your inchoate proposals for integrating the company were not accepted this time, thus saving us face. 2. Anderson’s profligacy cost him his job and its better you tighten up your belt before you go the same way. 3. Mr. 4. Every major war on this planet were followed by many years of austerity. 5. The firm’s profligate spending only hastened its downfall. 6. Humpty Dumpty’s antics remain a constant source of baldenfreude for children and adults alike. 7. His ludicrous attempts at mimicry in the office only earned him the opprobrium of his colleagues. 8. The millionaire technocrat and his cronies were publicly derided for being apostates, after they were exposed of polluting the environment while purporting to have spent large sums for water conservation. 9. 10. 11. 12. 13. 14. 15. 16. 17. 18. 19. 20. 21. 22. 23. 24. 25.

Write Like a Girl (or Guy) If all the characters you create talk exactly like you do, no one but your mom is going to want to read your book—and maybe not even her if you haven't called recently. That's why you need to understand how to write dialogue that sounds authentic, even when your character differs from you when it comes to their age, region, education level, social status, background, personality, and/or gender. Each of these factors plays a role in how a person (real or fictional) speaks, and you need to consider all of them to make your characters’ dialogue sound truly legit. But today we’re focusing on gender. Let’s preface this whole shebang with a disclaimer: Like anything involving differences between sexes, this can be a bit of a touchy subject. Things have improved significantly. Handling problems If you're ever perplexed about how to write dialogue for a character with a particular trait, your best bet is to spend some time carefully listening to people who share that trait. Asking questions

How to Finish What You Start: A Five-Step Plan for Writers How to finish what you start Do you have a bunch of first chapters tucked away in a drawer – for seven different novels? Is there a folder full of abandoned short stories on your computer? Have you left a trail of abandoned blogs around the internet? Did your ebook fizzle out after a few pages? Most writers have been there … again, and again, and again. Maybe it’s the same for you. No-one’s going to buy a half-written novel. Here’s how: Step #1: Stop Starting New Projects Believe me, I know how tempting it is to grab that new idea and run with it. Do it: Decide, right now, that you won’t start anything new until you’ve finished something off. Step #2: Assess Your Current Projects Take a long, hard look at all your current works-in-progress. Is there anything that’s just not worth completing? Rather than keeping old projects hanging around, ditch any that have died on you: As with all dead things, holding onto it won’t keep it alive or change the fact that it’s useful time has come and gone.

25 Insights on Becoming a Better Writer When George Plimpton asked Ernest Hemingway what the best training for an aspiring writer would be in a 1954 interview, Hem replied, “Let’s say that he should go out and hang himself because he finds that writing well is impossibly difficult. Then he should be cut down without mercy and forced by his own self to write as well as he can for the rest of his life. At least he will have the story of the hanging to commence with.” Today, writing well is more important than ever. Far from being the province of a select few as it was in Hemingway’s day, writing is a daily occupation for all of us — in email, on blogs, and through social media. So what can we do to improve our writing short of hanging ourselves? 1. Don’t just plan to write—write. 2. [The] Resistance knows that the longer we noodle around “getting ready,” the more time and opportunity we’ll have to sabotage ourselves. 3. Find your best time of the day for writing and write. 4. 5. 6. 7. 8. 9. Treat writing as a job. 10. 11. 12.

6 Ways to Hook Your Readers from the Very First Line Although I consider myself an avid reader, I must admit I have a short attention span when it comes to getting into books. If you fail to grab my attention in the first few lines, I start spacing out. Most readers are like me. Here are a few things I find annoying in the first lines of a story: Dialogue. The last thing you want to do as a writer is annoy or bore people. (N.B. 1. Put a question in your readers’ minds. “Those old cows knew trouble was coming before we did.” 2. By starting at an important moment in the story, your reader is more likely to want to continue so he or she can discover what will happen next. “It was dark where she was crouched but the little girl did as she’d been told.” 3. Description is good when it encourages people to paint a picture in their minds. “Last night I dreamt I went to Manderley again.” 4. The promise of reading more about a character you find intriguing will, no doubt, draw you into a story’s narrative. 5. 6.