Be a better writer in 15 minutes: 4 TED-Ed lessons on grammar and word choice 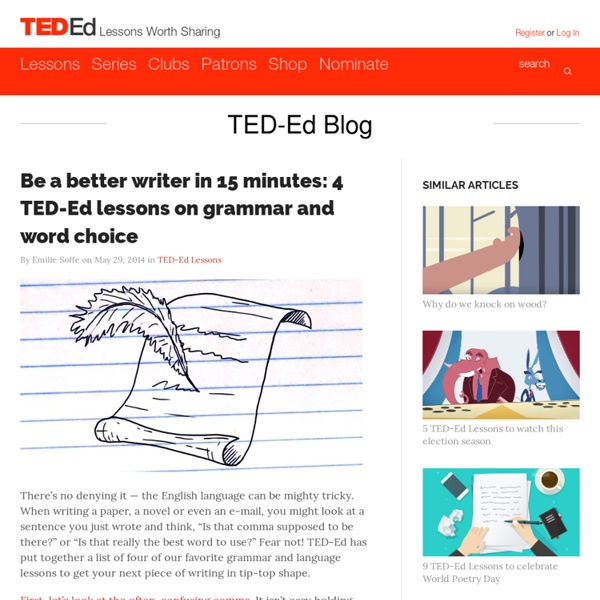 There’s no denying it — the English language can be mighty tricky. When writing a paper, a novel or even an e-mail, you might look at a sentence you just wrote and think, “Is that comma supposed to be there?” or “Is that really the best word to use?” Fear not! TED-Ed has put together a list of four of our favorite grammar and language lessons to get your next piece of writing in tip-top shape. First, let’s look at the often-confusing comma. What about the Oxford comma? Now, take an adjective such as “implacable” or a verb like “proliferate” or even another noun “crony,” and add a suffix, such as “-ity” or “-tion” or “-ism.” Finally, when it comes to good writing, don’t take the easy route!

Poetry and Literature Poet Laureate, Juan Felipe Herrera Herrera took up his duties as the 21st Poet Laureate on Tuesday, September 15th—the first day of Hispanic Heritage Month—with a reading of his work at the Library’s Coolidge Auditorium. Herrera launched his Poet Laureate Project—La Casa de Colores—on September 15 (see details below). Educational Technology and Mobile Learning: The Ultimate EdTech Chart for Teachers and Educators February 7, 2017 Below is a chart we have been working on during the last few weeks. It features a number of key websites and online resources arranged into different categories. We did not cover all school subjects but we will be adding more resources to the list in the future. Our purpose is to provide teachers and educators (and students) with a repository of EdTech websites that can potentially help them with the teaching of their content areas. The great thing about this work is that it is curated by teachers for teachers.

These Viral Two Sentence Horror Stories Are Creepier Than Any Scary Movie Seven months ago, a Reddit user asked a simple question: "What is the best horror story you can come up with in two sentences?" The response was deafening and blood curdling, and the conversation is just starting to go viral. The terror contained in these stories is different than the gross-out horror most blockbusters go for.

Writing a Multiple Viewpoint Novel Let's start with the basics... A multiple viewpoint novel is one in which two or more members of your cast list are viewpoint characters – that is, those characters through whose eyes we witness the events of the novel and whose thoughts and feelings we have direct access to. Or to put it even more simply... Editable PowerPoint Newspapers PowerPoint Template Views 925,852 Filed under Educational , Editor's pick, english, newspaper, resource, school We have just updated our popular editable PowerPoint newspapers.

Newspaper Map We have indexed all newspapers and plotted their correct locations, in 39 countries. Might have missed some. And most newspapers in another 199 countries, a bunch of them not in their correct locations. Add new ones here: add/correct "The immediate usefulness of Newspaper Map is readily apparent." Jared Keller, The Atlantic National Geographic Learning - English Language Teaching & Learning (ELT) National Geographic Learning, a part of Cengage Learning, is a leading educational publisher of school, higher education, English Language Teaching, library and reference materials. At National Geographic Learning, we believe that an engaged and motivated learner will be a successful one, and we design our materials to motivate. We believe that learning can be exciting, inspiring, and transformational. Through our learning programs, we want learners to experience the excitement and joy of learning that National Geographic explorers, scientists, writers and photographers experience. We share real stories from National Geographic that increase learners' knowledge of the world and everything in it.

British War Poetry-WWI Back to Modern History SourceBook Siegfried Sassoon (1886-1967):"How to Die" Link to Collected Poems [At Columbia] Wilfred Owen (1893-1918):"Anthem for a Doomed Youth" Link to Collected Poems [At Toronto] Wilfred Owen: "Dulce et Decorum Est"Herbert Read (1893-1968): "The Happy Warrior"W.N.Hodgson (1893-1916): "Before Action"Wilfred Gibson (1878-1962) "Back"Link to Collected Poems [At Columbia] Philip Larkin (1922-1985): "MCMXIV" Link to Poems [At Hooked.net] Siegfried Sassoon (1886-1967) "How to Die" Dark clouds are smouldering into red While down the craters morning burns. Using Effective Diction "The difference between the almost-right word and the right word is really a large matter—it’s the difference between the lightning bug and the lightning." —Mark Twain Writing teachers often tell their students to "show--don't tell."