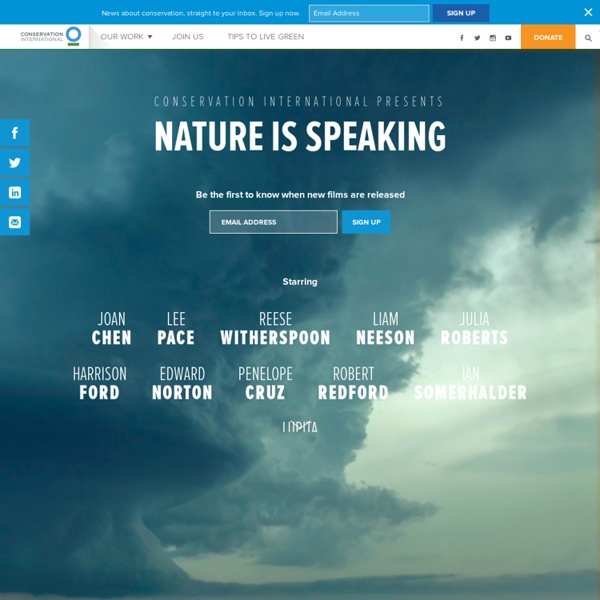 Facelift – WebEnglish.se WebEnglish.se has gone through a total facelift. For the last week, we have been working to make WebEnglish.se more accessible, user-friendly, modern and faster for our visitors’ convenience. Themes have got a more prominent position, as you can access them on a separate Themes Page as well as under each level’s menu item. The number of language level categories has been diminished from five to four, after a vote on Facebook. The former Lower Intermediate Level materials have been transferred either to Beginner 1-3, to Elementary 4-5 or to both. Every individual matters. Every action counts. A new documentary by Cathy Henkel. Banda Aceh Premiere! SCREENING + Q&A WITH PRODUCER and HaKa Serambi Mekkah University INDONESIA18 July 2016 9am-1pm Sponsors :: Serambi Mekkah University & Indonesia Green Union, Australia Indonesia Arts Alliance. Bandung Premiere!

Earth - Weird and wonderful photo quiz It's the BBC Earth weird and wonderful photo quiz. This is your chance to prove to yourself and others what you know about life on this planet. Guess what weird and wonderful things are in these 15 photos below. Make a note of how many you get right, and share your score with us on BBC Earth on Facebook and Twitter, using #EarthQuiz. Colorado Teenager Rallies Youth Around The World To Protect The Planet Xiuhtezcatl Roske-Martinez is only 16 years old, but he's committed to changing the world. The Colorado teen is the youth director of Earth Guardians, a nonprofit that encourages young people to connect and become involved in environmental activism. Through a variety of demonstrations and projects -- including an eco hip-hop duo that he created with his younger brother -- Xiuhtezcatl works to engage other youth leaders and share important environmental issues. The brothers have produced songs like “What the Frack?” and “Speak for the Trees” to deliver these messages in a way that is fun and accessible for other young adults.

These are the world's 19 most endangered animals There are 19 animals on the World Wildlife Fund’s (WWF) critically endangered list, including three species of rhino, seven primates and four big cats. The South China tiger, which has not been seen in the wild for more than 25 years and is considered “functionally extinct”, is top of the list. The South China tiger is “functionally extinct” Image: REUTERS/Aly Song While China outlawed tiger hunting in 1979 and declared the South China tiger’s survival a conservation priority in 1995, no existing protected areas are sufficiently large, healthy or undisturbed enough to sustain viable tiger populations, WWF says. Speech - I have a dream... SpeechI will now present the whole theme that we are going to work with during the next few weeks. Don't worry - I will give you instructions while we are working as well.You work together in your groups with: 1. The magic of three Watch the film about the Magic of three: 2. How to write a speech Now watch the film I have made for you.

Endangered Animals 4-9 – WebEnglish.se Background Animals are one of the most interesting topics to young learners. After studying pets and wild animals in the earlier year, it is time to add an environmental view on the topic and study some endangered species. Warm-up 100 Endangered Animals: 2013 – YouTube (8:50) made this video as a project for my Design II class at the University of Toronto. A film showing a world map, filling it with endangered animals. Lesson 1: Finding news - BBC School Report Image copyright BBC SCHOOL REPORT This lesson explains what makes a story newsworthy and how to go about finding news. Students will be introduced to the idea of writing for a specific audience and are also taught about the sources journalists use to make sure their reports are truthful and accurate.

This is London's first packaging free shop Dozens of similar, package-free shops have opened across the world By Anna Pujol-Mazzini LONDON, Sept 4 (Thomson Reuters Foundation) - When Ingrid Caldironi decided to start living a more eco-friendly lifestyle, she made a few changes to her routine. Caldironi bought a reusable coffee cup, started making her own beauty products and tried to stop buying packaged products. National Geographic In Brazil, which houses 30 percent of the remaining tropical rain forest on Earth, more than 50,000 square miles of rain forest were lost to deforestation between 2000 and 2005. Biologists worry about the long-term consequences. Drought may be one. English Fishbowl/Socratic Seminar Discussion – The Canswedian English Teacher Ahhh… the fishbowl assignment. I saw an English teacher do this with her class once a long time ago, and was immediately hooked. Why is this is my absolute, most favourite assignment to give students?

Five smart ways to fight food waste iStock An estimated 30 percent of the planet’s food supply is needlessly discarded. Here are some imaginative ideas to stop the rot. Halloween Worksheets and Activities Lanternfish has a variety of different activities for Halloween. Just click on the worksheet below. It may take a while to open as most of the files are MS Word documents. Happy Halloween!