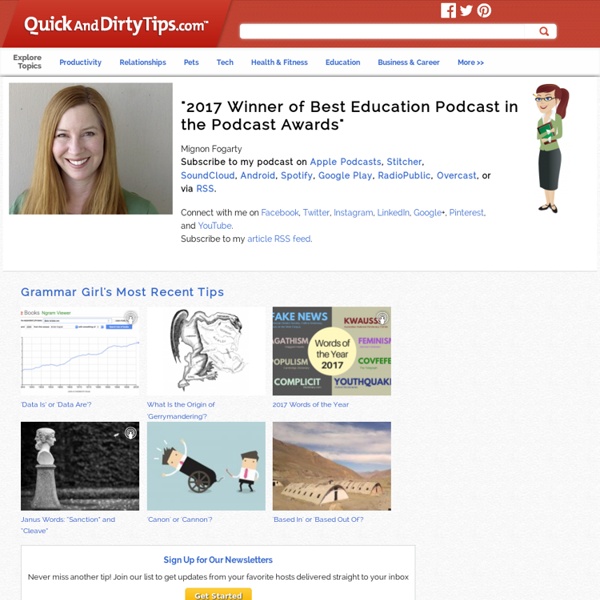 Mignon Fogarty is the creator of Grammar Girl and the founder and managing director of Quick and Dirty Tips. A magazine writer, technical writer, and entrepreneur, she has served as a senior editor and producer at a number of health and science web sites. She has a B.A. in English from the University of Washington in Seattle and an M.S. in biology from Stanford University. Mignon believes that learning is fun, and the vast rules of grammar are wonderful fodder for lifelong study. She strives to be a friendly guide in the writing world. Her archenemy is the evil Grammar Maven, who inspires terror in the untrained and is neither friendly nor helpful. Grammar Girl provides short, friendly tips to improve your writing. To book a lecture event with Mignon Fogarty for your company or organization, contact Macmillan Speakers. Follow Mignon on Google+, Twitter, Facebook, StumbleUpon, LinkedIn, and Pinterest. Awards Media The Oprah Winfrey Show, Grammar Girl Fixes Common Mistakes, March 2007

Links for translators The resources on this page are all available free (or in free versions) on the Internet. General Dictionaries Cambridge The suite of Cambridge dictionaries are possibly the best online English-English dictionaries available (and with nearly 2m searches a month, among the most popular). Catalan Catalan dictionary from the Enciclopèdia Catalana. Chicago Manual of Style 16th Edition Summary: This section contains information on The Chicago Manual of Style method of document formatting and citation. These resources follow the sixteenth edition of The Chicago Manual of Style, which was issued in September 2010. Contributors:Jessica Clements, Elizabeth Angeli, Karen Schiller, S.

it's NOT about what the teacher does with technology Bruce Springsteen: "When we kiss…" Not just going through the motions! You could probably say I've had four different though overlapping careers — in language teaching, language teacher training, technology and ELT management. The first of those I retired from (after 35+ years) a few months ago, though the number of contact hours I was doing was limited; teacher training I'm retiring from at the end of this month; management I got fired from (to the relief of all involved!)

33 ways to speak better English If you’re reading this, I imagine you want to speak better English and communicate in a more confident and competent way. When we communicate effectively we are able to express our ideas and opinions, share experiences, and build relationships with others. When we struggle to express ourselves, we feel unvalued and insecure. As human beings, we want to participate in group discussions and have an impact on the society around us. In the modern world, we communicate across borders. English is the closest thing we have to an international language. An Illustrated Guide to Writing Scenes and Stories The writing workshop/lecture Wonderbook: Scenes is an edited version, using as its starting point the transcript of a version presented at the Arkansas Book Festival in 2014. Both before that event and after, I gave versions of this lecture in other locations, including Shared Worlds, Clarion, and the Yale Writer’s Workshop. While keeping the core of the Arkansas version, I have added in material from the other versions and also expanded some sections based on participant questions. The sometimes informal wording of the original lectures has been retained where possible to reflect the source. Writers often argue about the difference between the art of writing and the craft of writing. They also argue about what can be taught and what can’t.

Finding the Words for Hope: The Fight for Endangered Languages Vocalized Expressions of Humanness “Iktsuarpok” is a word with no direct English translation. From Inuit, it best translates to “the frustration of waiting for someone to show up.” It is a word imbued with special meaning, and a word that may now be threatened. The Endangered Languages Project classifies the Inuit language as “vulnerable,” with only around 20,000 speakers. English teachers, are you asking the right questions? Declan Cooley, CELTA Opens in a new tab or window. trainer at the British Council in Poland, explains why some questions are not as effective as they first appear, and offers some alternatives. Questions of all kinds are a teacher's most basic tools for generating interest, provoking thoughts, encouraging students to speak, developing text comprehension skills and checking understanding. New teachers on courses like the CELTA spend a lot of time honing their skills at using effective questions in the classroom. As well as discovering what questions work, teachers learn that some questions are not as effective as they first appear.

25 Words That Are Their Own Opposites Here’s an ambiguous sentence for you: “Because of the agency’s oversight, the corporation’s behavior was sanctioned.” Does that mean, "Because the agency oversaw the company’s behavior, they imposed a penalty for some transgression," or does it mean, "Because the agency was inattentive, they overlooked the misbehavior and gave it their approval by default"? We’ve stumbled into the looking-glass world of contronyms—words that are their own antonyms.

Greta for easy to read grammar explanations! by jmcandrew Oct 11