Fifty (50!) Tools which can help you in Writing - Stepcase Lifehack 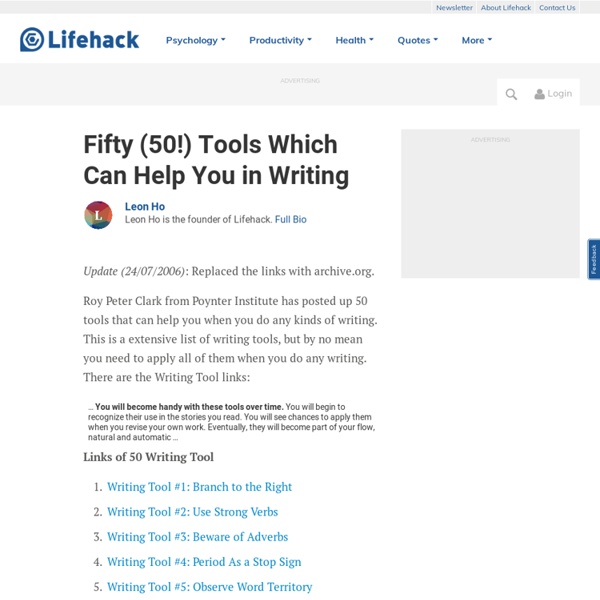 100 Mostly Small But Expressive Interjections David Bier Thanks for this – what a fun post considering there’s no actual narrative in it! Cecily Some of these interjections are quite culturally and age specific, so if people need to be told what they mean, they should probably not be using them.For example, to many Brits, va-va-voom is not old-fashioned at all, but instead is firmly linked to the long-running ads that footballer Thierry Henry made for the Renault Clio. Himanshu Chanda Whoa ! Eight Secrets Which Writers Won’t Tell You Image from Flickr by Lazurite This is not particularly relevant to the post, but I’m getting an awful lot of comments telling me, often a little snarkily, “it’s ‘THAT’ not ‘WHICH’”. The “don’t use which for restrictive clauses” rule comes (as far as I can tell) from Strunk and White.

10 Search Engines to Explore the Invisible Web No, it’s not Spiderman’s latest web slinging tool but something that’s more real world. Like the World Wide Web. The Invisible Web refers to the part of the WWW that’s not indexed by the search engines. Most of us think that that search powerhouses like Google and Bing are like the Great Oracle”¦they see everything. Unfortunately, they can’t because they aren’t divine at all; they are just web spiders who index pages by following one hyperlink after the other. But there are some places where a spider cannot enter.

» Overclock Your Reading Speed This is a guest post from Kim Roach of The Optimized Life. In today’s Information Age, reading is now a prerequisite for success in life. In fact, many presidents, including Kennedy, have required their staff to take speed reading lessons. Brian Tracy, a best-selling author, points out that just 1 hour per day of reading will make you an international expert in your chosen field within 7 years. Schools BoomWriter lets you easily incorporate and experience the benefits of technology as your students are engaged in the following (or similar) standards-based learning activities: Grade 3 CCSS.ELA-Literacy.W.3.3 - Write narratives to develop real or imagined experiences or events using effective technique, descriptive details, and clear event sequences.

Always innovative Toronto Public Library lets us check out humans as well as books In comfy green chairs in front of a massive and sunny window overlooking Bloor Street, several different conversations are taking place between pairings of strangers. A CBC journalist is telling someone about the stories he's covered. A Tibetan Buddhist monk is talking about his journey to Canada and about the importance of peace. I'm talking to 19-year-old Brandon Hibbs about his life. Originally from Newfoundland, Hibb's parents moved the family to Windsor, then Toronto to make sure their son, who has cerebral palsy, got the best services he could get. I ask Hibbs about school (he likes history and science), his career plans (broadcasting) and his love life (could be better).

25 Insights on Becoming a Better Writer When George Plimpton asked Ernest Hemingway what the best training for an aspiring writer would be in a 1954 interview, Hem replied, “Let’s say that he should go out and hang himself because he finds that writing well is impossibly difficult. Then he should be cut down without mercy and forced by his own self to write as well as he can for the rest of his life. At least he will have the story of the hanging to commence with.” The 100 Best Books of All Time Many publishers have lists of 100 best books, defined by their own criteria. This article enumerates some lists of "100 best" books for which there are fuller articles. Among them, Science Fiction: The 100 Best Novels (Xanadu, 1985) and Modern Fantasy: The 100 Best Novels (Grafton, 1988) are collections of 100 short essays by a single author, David Pringle, with moderately long critical introductory chapters also by Pringle. For publisher Xanadu, Science Fiction was the first of four "100 Best" books published from 1985 to 1988. The sequels covered crime & mystery, horror, and fantasy. Lists[edit]