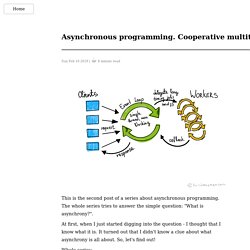 The whole series tries to answer the simple question: "What is asynchrony? ". At first, when I just started digging into the question - I thought that I know what it is. It turned out that I didn't know a clue about what asynchrony is all about. So, let's find out! Whole series: 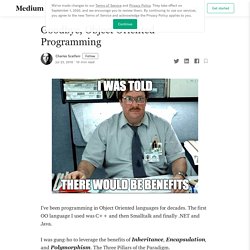 The first OO language I used was C++ and then Smalltalk and finally .NET and Java. I was gung-ho to leverage the benefits of Inheritance, Encapsulation, and Polymorphism. The Three Pillars of the Paradigm. Uml - Graphviz top to bottom AND left to right. COGRE Homepage. COGRE is pronounced similarly to cougar. 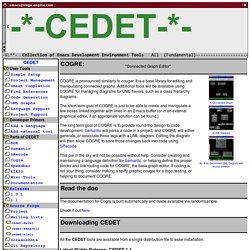 It is a base library for editing and manipulating connected graphs. Additional tools will be available using COGRE for managing diagrams for UML flavors, such as a class hierarchy diagrams. The short term goal of COGRE is just to be able to create and manipulate a few boxes linked together with lines in an Emacs buffer (or in an external graphical editor, if an appropriate solution can be found.) Collection of Emacs Development Environment Tools Homepage.

Ryan Singer sur Twitter : "Experimenting with to design a side project. Very alpha, but there's something compelling about using a statechart to prototype the basic structure of the product. Pushes you to think in terms of flows ra. Regex Tutorial - Lookahead and Lookbehind Zero-Length Assertions. A Programmable Programming Language. By Matthias Felleisen, Robert Bruce Findler, Matthew Flatt, Shriram Krishnamurthi, Eli Barzilay, Jay McCarthy, Sam Tobin-Hochstadt Communications of the ACM, Vol. 61 No. 3, Pages 62-71 10.1145/3127323 Comments In the ideal world, software developers would analyze each problem in the language of its domain and then articulate solutions in matching terms. 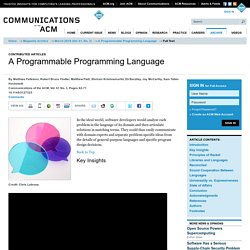 They could thus easily communicate with domain experts and separate problem-specific ideas from the details of general-purpose languages and specific program design decisions. Back to Top Key Insights. JOY.JS - make happy little programs. Consider the paintbrush: simple enough for a child, complex enough for an Old Master.

Modeling - Official UML Activity diagram meta model? Velocity Users Guide. View topic - Where can I read more about the methods in MagicDraw? Velocity Engine. Velocity Engine If you're new to Velocity, you can read the Overview to understand its principles. 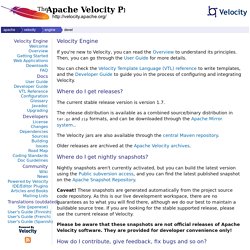 Then, you can go through the User Guide for more details. You can check the Velocity Template Language (VTL) reference to write templates, and the Developer Guide to guide you in the process of configuring and integrating Velocity. Relational Programming in miniKanren. Src5. TR2005 07 22 tcp EFSM. User-friendly language for programming efficient simulations. Computer simulations of physical systems are common in science, engineering, and entertainment, but they use several different types of tools. 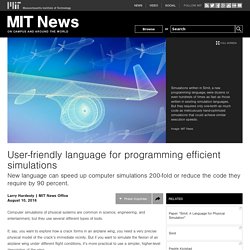 If, say, you want to explore how a crack forms in an airplane wing, you need a very precise physical model of the crack’s immediate vicinity. But if you want to simulate the flexion of an airplane wing under different flight conditions, it’s more practical to use a simpler, higher-level description of the wing. If, however, you want to model the effects of wing flexion on the crack’s propagation, or vice versa, you need to switch back and forth between these two levels of description, which is difficult not only for computer programmers but for computers, too. A team of researchers from MIT’s Computer Science and Artificial Intelligence Laboratory, Adobe, the University of California at Berkeley, the University of Toronto, Texas A&M, and the University of Texas have developed a new programming language that handles that switching automatically. 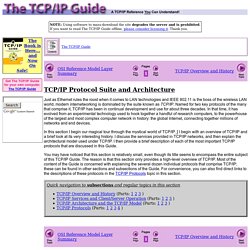 Named for two key protocols of the many that comprise it, TCP/IP has been in continual development and use for about three decades. In that time, it has evolved from an experimental technology used to hook together a handful of research computers, to the powerhouse of the largest and most complex computer network in history: the global Internet, connecting together millions of networks and end devices. 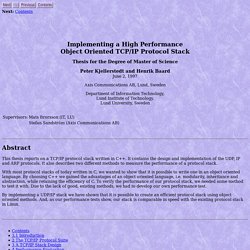 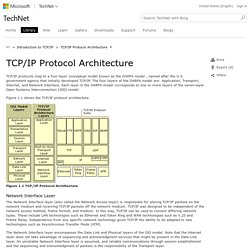 The Network Interface layer encompasses the Data Link and Physical layers of the OSI model. Internet Layer The Internet layer is responsible for addressing, packaging, and routing functions. MARTE References. (Please provide any related MARTE tool that you would like to post to this site to the site coordinator: sebastien.gerard[at]cea.fr) 1- MARTE Profile for Rational Software Architect (RSA) 7.0. 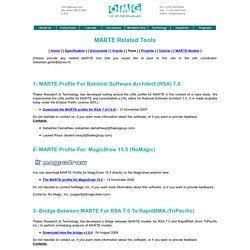 The home page for UML information is at OMG. This site includes links to other sites and to UML tools. How To Ask Questions The Smart Way. In the world of hackers, the kind of answers you get to your technical questions depends as much on the way you ask the questions as on the difficulty of developing the answer. This guide will teach you how to ask questions in a way more likely to get you a satisfactory answer.

Topic Based Subsets. Why Lisp. Papyrus Documentation. Protovis. Mocl: Lisp for iPhone/iOS, Android, and other mobile platforms. Mocl is built around the idea that your application logic should live in Lisp, and your user interface code should be fully native to the platform — Obj-C or Java in the case of iOS and Android. Introduction to UML2 Profiles. How to Use Trees (The Java™ Tutorials > Creating a GUI With JFC/Swing > Using Swing Components) Generating UML models programmatically by using IBM Rational Software Architect. XML Parser for C. Rational Software. How to convert ordinary mutable classes into an immutable one with Java. Oop-in-fp. RE: What's so cool about Scheme? Become a Programmer, Motherfucker. Rosetta Code.