Seasons - HowStuffWorks. Earth Farthest From Sun on Fourth of July—So Why So Hot? If the sun looks a little smaller than usual as you're barbecuing this Fourth of July, it's not your imagination: Earth will be farther from the sun on Monday than on any other day this year. 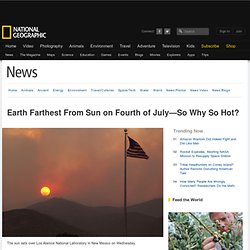 That's because the orbits of all the planets in our solar system—including Earth's—are not perfectly circular, a phenomenon that was first explained in mathematical detail by the 17th-century German astronomer Johannes Kepler. Kepler "figured out the orbits of the planets were elliptical in shape and that the sun was offset from the center," explained Mark Hammergren, an astronomer at the Adler Planetarium in Chicago, Illinois. What Causes The Seasons? What causes the seasons? 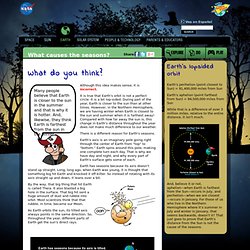 Many people believe that Earth is closer to the sun in the summer and that is why it is hotter. And, likewise, they think Earth is farthest from the sun in the winter. Although this idea makes sense, it is incorrect. It is true that Earth’s orbit is not a perfect circle. It is a bit lop-sided. There is a different reason for Earth's seasons. Earth's axis is an imaginary pole going right through the center of Earth from "top" to "bottom.

" Earth has seasons because its axis doesn't stand up straight. By the way, that big thing that hit Earth is called Theia. Why Are There Seasons? Want to stay on top of all the space news? 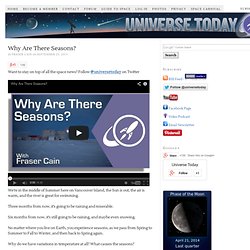 Follow @universetoday on Twitter We’re in the middle of Summer here on Vancouver Island, the Sun is out, the air is warm, and the river is great for swimming. Three months from now, it’s going to be raining and miserable. Six months from now, it’s still going to be raining, and maybe even snowing. No matter where you live on Earth, you experience seasons, as we pass from Spring to Summer to Fall to Winter, and then back to Spring again. Why do we have variations in temperature at all? But this isn’t why we have seasons. What Causes the Earth's Seasons? Why Do We have Seasons? 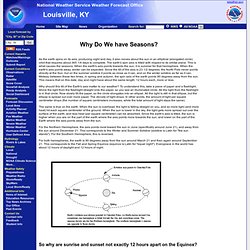 As the earth spins on its axis, producing night and day, it also moves about the sun in an elliptical (elongated circle) orbit that requires about 365 1/4 days to complete. The earth's spin axis is tilted with respect to its orbital plane. Solar System: Sun. Everything in the Solar System orbits around the Sun. 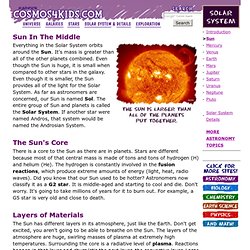 It's mass is greater than all of the other planets combined. Lasers Measure Earth's Rotation and Wobble. The Earth spins around once every 24 hours on its axis, creating the continuous cycle of day and night. 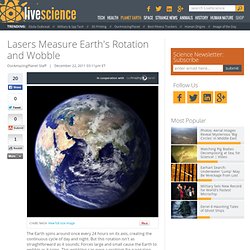 But this rotation isn't as straightforward as it sounds: Forces large and small cause the Earth to wobble as it spins. This wobbling can pose a problem for navigation systems like GPS. Scientists working with lasers and mirrors are refining a new system to track the Earth's rotation and its kinks. What is the Chandler wobble? - HowStuffWorks. Geophysicist Discovers Why Earth 'Wobbles' The earth wobbles in space. 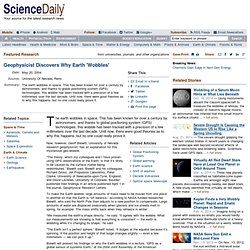 This has been known for over a century by astronomers, and thanks to global positioning system (GPS) technologies, this wobble has been tracked with a precision of a few millimeters over the last decade. Until now, there were good theories as to why this happens, but no one could really prove it. Now, however, Geoff Blewitt, University of Nevada research geophysicist, has an explanation for this mysterious geo-wobble. “The theory, which my colleagues and I have proven using GPS observations of the Earth, is that it’s likely to be caused by the surface matter being redistributed,” Blewitt said. Blewitt and his colleagues, Richard Gross, Jet Propulsion Laboratory; Peter Clarke, University of Newcastle-upon-Tyne, England; and David Lavallée, University of Colorado, Boulder; published their findings in an article published April 1 in the journal, Geophysical Research Letters. “We measured the earth’s shape directly,” he said.