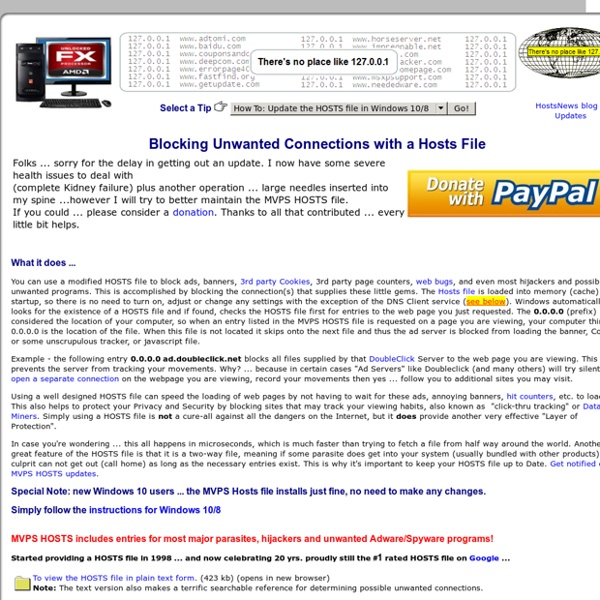 What it does ... You can use a modified HOSTS file to block ads, banners, 3rd party Cookies, 3rd party page counters, web bugs, and even most hijackers and possibly unwanted programs. This is accomplished by blocking the connection(s) that supplies these little gems. Example - the following entry 0.0.0.0 ad.doubleclick.net blocks all files supplied by that DoubleClick Server to the web page you are viewing. Using a well designed HOSTS file can speed the loading of web pages by not having to wait for these ads, annoying banners, hit counters, etc. to load. In case you're wondering ... this all happens in microseconds, which is much faster than trying to fetch a file from half way around the world. Special Note: new Windows 10 users ... the MVPS Hosts file installs just fine, no need to make any changes. Simply follow the instructions for Windows 10/8 MVPS HOSTS includes entries for most major parasites, hijackers and unwanted Adware/Spyware programs! Windows DNS Client Service Important! Related:  enrico.a • shiny stuff

Episode 253 | Kyle Scarmardo - Motivation Matters Kyle Scarmardo talks with Dave Rael about being deliberate with your time, the importance of self-awareness, coaching and mentoring, and taking action Kyle spent sixteen years in the Information Technology space for a large financial company, the 20th largest private company in America, where he worked his way up from the bottom to become an executive in 13 years at the age of 35. The latter part of his career heavily involved helping others with self-improvement, career growth, improving executive function, applying new strategies to better communicate and influence, and assist with culture change.

Spyware Warrior - View topic - Hosts file This is an introduction to using and fixing the HOSTS file to enable some familiarity, to clarify some general points, and provide links to assist users wanting to know more, particularly at the entry level to the topic. Most of us use the HOSTS file everyday without knowing it, and without needing to alter it in any way. It’s when log problems arise that we need to fix, then a little knowledge comes in handy, but the volume of detail in finding out about it can often deter us from being useful. The following was jotted to be useful, rather than give the full and complete knowledge base. A host file entry works in reverse. I must have read a couple of hundred explanations of hosts files...That is the best yet! This would look like this (in a pretend Hosts file) 222.0.0.0 New York City and where our PC lives, we call it ‘home’ or ‘localhost’ which looks like this: 127.0.0.1 home [As in “There’s no place like 127.0.0.1” on geek Tshirts * Note: Hosts has no file extension.

Your Personal PLC Tutor Site - RS232 Communications/software Learn quickly with our PLC Training DVD Series: on sale $599.00 $379 Click here now for details! RS-232 Communications (software) Now that we understand the hardware part of the picture, let's dive right into the software part. We'll take a look at each part of the puzzle by defining a few of the common terms. Ever wondered what phrases like 9600-8-N-1 meant? Do you use software-handshaking or hardware-handshaking at formal parties for a greeting? ASCII is a human-readable to computer-readable translation code. The picture below shows how data leaves the serial port for the character "E" (45h 100 0101b) and Even parity. Another important thing that is sometimes used is called software handshaking (flow control). The last thing we should know about is delimiters. Sometimes an STX and ETX pair is used for transmission/reception as well. Finally, we might also come across an ACK/NAK pair. RS-232 has a lot of information to absorb, so feel free to reread it.

Gorilla Design Studio Presents- The Hosts File Every day, millions of people browse the web. They think they are doing so in private. They aren't. What advertisers don't want you to know, I will tell you. You are being tracked as you surf the web, right now. Not by me, but by some of the advertisers. They think they have a right to track your surfing habits, under the veil of providing a "better" browsing experience. What they don't tell you is that they also sell information about your habits to third-parties. What they don't tell you, is that you can do something about it. Now Macintosh users can use the Hosts file as well! Unix-style OS users also have their own directions. This site and all contents ©2000, ©2001, ©2002, ©2003 by Stuart Hanzlik, except where otherwise noted.

How to get to the Paul Scherrer Institute | Paul Scherrer Institut (PSI) PSI is located in northern Switzerland, approximately midway between Zürich and Basel. The nearest towns and railway stations are Baden and Brugg. Frequent air and train connections via Zürich or Basel are available from all major European cities. To find PSI by car Route planning with Google Maps You can reach PSI via Brugg or Baden. Via Brugg: Follow the Koblenz–Zurzach signs through Brugg. Via Baden: Follow the Koblenz–Zurzach signs through Baden. Programming of the navigation system: For PSI West: enter city "Villigen", street "PSI" For PSI East: enter city "Würenlingen", street "PSI" It is permitted to use the connecting road across the river Aare. Directions to PSI Download. To reach PSI by public transport Brugg is on the train line (Zürich–Basel, Zürich–Bern). When you land at the airport There is an SBB railway station at the International Airport at Zürich-Kloten.

Audit and document Security User Rights Assignment using C# | Network Audit and Documentation, CENTREL Solutions Blog For more information on the Windows Server documentation abilities of XIA Configuration please see the following We've recently been asked about the auditing of User Rights Assignment as seen in the Local Group Policy Editor. Having looked into this issue it is apparent that this cannot be done with any high level API such as WMI and requires the use of P/Invoke and the Win32 method LsaEnumerateAccountsWithUserRight. I've seen many posts on the Internet on the topic but I haven't seen a simplified example of this in use so have writen a quick C# sample application to enumerate the various rights and privileges and display the users assigned to that right in a grouped listview as per the screenshot below. This can be downloaded from our web site in Visual Studio 2010 The sample supports the following Document and Audit User Rights Assignment with XIA Configu